Our Challenge Is To Transcend Our Evolutionary Ape Heritage 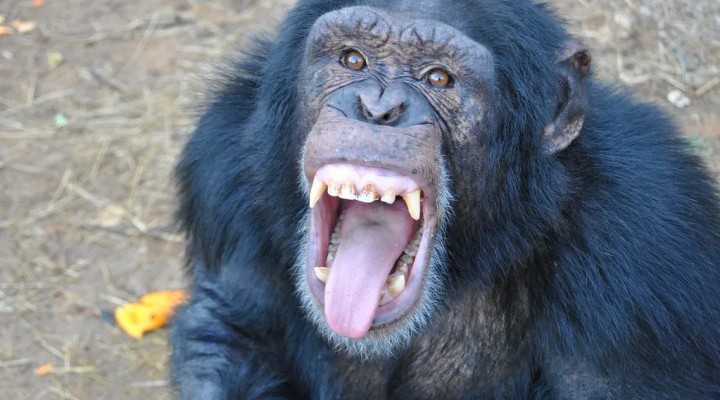 Did you know chimpanzees hunt smaller primates for food?

They do. They’re actually very skillful hunters due to their size, their strength, and especially their intelligence. They coordinate their attacks, working together to cut off the escape routes of their prey to greatly increase their success rate. Scientists have even frequently observed them using crude spears to kill a small primate species called the lesser bush baby for their meat.

One of the many interesting things about this behavior in our primate cousins is that they are so good at hunting they can become victims of their own success, wiping out entire populations of prey in their area. Red colobus monkeys have been hunted to the brink of local extinction in Uganda by chimpanzees hungry for a quick protein fix, solely because they’ve been gobbling up those delicious little guys faster than they can reproduce.

The tendency of homo sapiens to overburden our ecosystem with our consumption is not unique to us, and is not new. In fact, it looks like we’ve been on this trajectory toward ecocide since our ancient evolutionary ancestors began evolving extra brain matter.

And it is possible to just stop there and conclude that we are no different from our chimp relatives in this sense. That we will simply keep overhunting the red colobus monkey until there are none left, that we will keep depleting and destroying our biosphere until it can no longer sustain life. That the human brain differs from the chimpanzee’s only in intelligence, not in wisdom. That we are in essence no different from the cyanobacteria at the dawn of the Proterozoic Era, a new species showing up on the scene and causing a mass extinction event in an ecosystem overburdened by their rapid flourishing.

From what I can tell, the only people who find this idea outlandish are those who have never experienced a great unpatterning of their own. Who have never healed the wounds of their past and transcended the unwholesome mental habits which were given to them by their conditioning. To anyone who has experienced a dramatic transformation from dysfunction into health, it’s obvious that any human could potentially go through such transformations as well. Or even all humans.

It is possible that our descendents will look back on humanity’s existence on this planet from prehistoric times up until this crucial present moment as a kind of bridge between animal life and a new terrestrial expression that isn’t driven by the unconscious conditioning patterns that have driven the movements of every species on this planet from the very first single-celled organisms onward. That what we’re experiencing right now at this critical juncture is what it looks like before the emergence of the Earth’s first conscious species.

An unconscious human is one driven compulsively by deep-seated mental habits they don’t really see and can’t do much to control, so they’ll often find themselves engaged in unwholesome behavior patterns like addiction, unkindness, greed and neurosis, and making the same mistakes over and over for reasons they don’t quite understand.

A conscious human is one who doesn’t have unseen conditioning pulling the strings from behind the scenes in their subconscious mind, because they have done their work and drawn their inner demons into the light of consciousness where they can be healed. They are therefore able to move through life deliberately and in the interest of what’s best, rather than compulsively and in a way that spreads trauma to others.

A conscious humanity would mean that this way of functioning blossoms throughout the entire species.

Doesn’t it kind of look like that might be what’s happening? Like all the chaos and confusion of these strange times could simply be the birth pangs of a species whose relationship with consciousness is about to take a dramatic pivot? The increasingly shrill mass media narratives rapidly approaching white noise saturation? The increasingly widespread awareness that our society’s rules are made up and we can change them whenever we want? The mysterious increase in incidents of spiritual awakening as reported by teachers of enlightenment? Just how goddamn weird everything’s been getting these last few years?

I think it’s possible. I think it’s possible we are moving as a species toward an adaptation that will enable us to survive in a situation which is very different from the one we first emerged in, as every species eventually does if it doesn’t go extinct. If this is indeed what is happening, it stands to reason that it will be an adaptation that prevents us from wiping ourselves out via ecocide or nuclear war, and that a collective movement into consciousness is what that adaptation will look like.

A conscious species would be able to work in cooperation with its ecosystem, rather than compulsively consuming it due to primitive impulses to obtain and dominate and egoic impulses to be rich and have more. A conscious species would be able to convert civilization from competition-based models into collaboration-based models, where rather than trying to climb over each other to get ahead we all work together to make sure everyone has what they need to live. A conscious species would no longer see the sense in dividing itself up into separate competing nation-states which brandish armageddon weapons at each other out of fear and greed.

The more I learn about humanity, and the more I learn about myself, the more possible such a world appears to be. Sure the world’s a chaotic and distressing mess right now, but so is childbirth. However bad things get for us, as long as we’re still alive our problems are nothing that can’t be fixed with a collective movement into consciousness.

Anyway. That’s my pet theory right now. And the cool thing about my theory is that if you like it too, you don’t have to wait for it to come true. You can start becoming more conscious on your own right now and leading the charge for the rest of us. Investigate your true nature, heal your wounds, be responsible with your actions, and begin working to coax all your endarkened bits into the light.

And then hopefully the rest will follow. If they don’t, worst-case scenario is you wind up a lot more happy and functional than you otherwise would have been, because you brought so much more consciousness to your inner processes and your habits of perception and cognition.

I will meet you there.