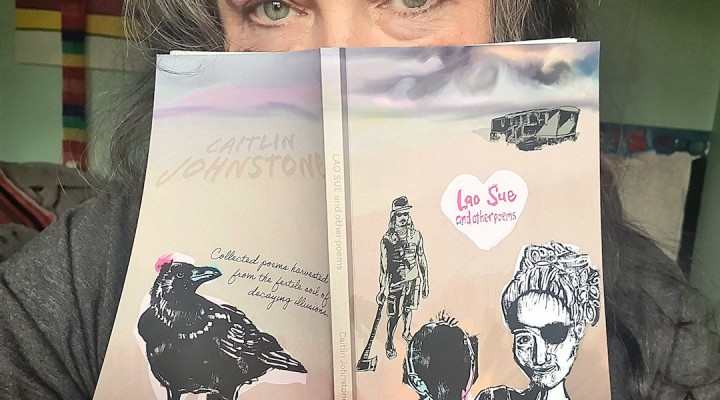 I have a new book out called Lao Sue And Other Poems, available in paperback or on PDF/ebook.

They’ll make you poor,
then shame you for being poor,
then push you into a job that keeps you poor
at a billionaire megacorporation.

They’ll make you crazy,
then shame you for being crazy,
then sell you the cure for crazy
at eighty bucks a pill.

You’re a failure if you can’t make ends meet
on impossible wages at an impossible cost of living
with a worthless degree you will never pay off no matter how hard you work
while advertisers blare at you about your insufficiencies,
while the news man tells you war is normal,
while Hollywood tells you the system is working perfectly,
while armed police guard grocery store dumpsters full of food from the hungry,
while executives go on five billion-dollar space rides for fun,
while you live surrounded by screens that tell you you are crazy
if you think any of this is not sane.

Take Oligarchizac™ for your depression,
take Plutocracipam™ for your anxiety,
just ninety bucks a pill.
Side effects may include compliance,
acquiescence, subservience, docility,
menticidal ideation,
a marked lack of interest in guillotines,
a dystopian society and a dying biosphere.

And the pundit says
“A new study by a Raytheon-funded think tank says war is good for the environment,
but first here’s a millionaire to explain the benefits of urinating on the homeless.”

And Hollywood says
“Here’s a movie about well-dressed attractive people with nice houses
engaging in amusing antics you’re too poor and stressed out to experience yourself.”

And the news man says
“Here’s a rags-to-riches story which proves capitalism works fine
and you should hate yourself if you can’t hack it here.”

And the advertisement says
“Do you feel like you’re losing your mind due to your sense of inadequacy
because you can’t afford Google’s latest NSA surveillance device?
Ask your doctor about Empiradol™,
just a hundred bucks a pill.”

They lock us in a room
and fill the room with water
and then shame us for drowning
and then charge us for tiny gasps of air
from a hose that leads to an ecosystem
that they are destroying as quickly as they can.

And hey I’ve invented a new antidepressant anti-anxiety antipsychotic
that I’m getting to market as quickly as I can.
It’s not a pill or a jab or an electrical shock treatment,
it’s just a big wad of cash taken by force from thieving megacorporations.
Side effects may include peace and relaxation,
an ability to buy food and think clearly,
a fondness for red flags,
and a hysterical corporate media.

And hey I think we just might make it,
past the veil of madness and cutthroat cruelty.

And hey I think there’s something deep within us
as yet untapped and as yet unrealized.

And hey I think an earthquake’s coming
that just might topple the towers of madness
once and for all.

Click here to order Lao Sue And Other Poems in paperback.

It Is A Good Time To Appreciate The Insects

0 thoughts on “New Book! Lao Sue And Other Poems”