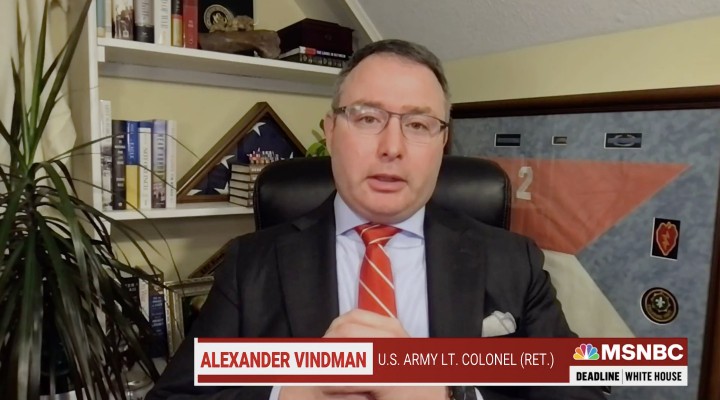 The Ukrainian-born MSNBC favorite Alexander Vindman, best known for his role in the Trump impeachment, has informed the network’s viewership that we are almost certainly on the cusp of a war with Russia comparable to World War II.

“I think we’re basically just on the cusp of war,” the retired lieutenant colonel told MSNBC’s Nicolle Wallace on Friday. “I think it’s all but certain in my mind that there’s going to be a large European war on the order of magnitude of World War II, with air power, sea power, massive ground force offensives, and my concern right now is making sure that the United States is postured for that outcome. I think there’s little to be done to avoid it at this point.”

Rather than yell and scream like a normal human being at Vindman’s incendiary claims about a near-certain world war against a nuclear superpower, Wallace merely asked Vindman to clarify that he did indeed believe it’s a foregone conclusion that there is going to be a military confrontation with Russia on the level of the second world war. Vindman maintained throughout the appearance that there was going to be a war with Russia, that it would be large, that it would involve Ukraine, and that Russia would be the aggressor.

“I hope to God I’m wrong,” Vindman said at the end of the segment. “But I’m willing to go ahead and raise this alarm, put my credibility on the line, to make sure that people are paying attention.”

"I think we're basically just on the cusp of war. I think it's all but certain in my mind that there's going to be a large European war… My concern now is making sure that the U.S. is postured for that outcome… The ball is in Putin's court" – @AVindman w/ @NicolleDWallace pic.twitter.com/QXiGv4B9as

This massive claim should be treated very seriously. It should be treated seriously not because it’s well-founded (Moon of Alabama explains that Moscow has no good reason to launch an unprovoked attack on Ukraine and war is entirely avoidable, and Kiev is telling the public to stop worrying about a Russian invasion), but because there’s no way for this claim not to be a big deal.

Think about it. If Vindman’s claims are true then we should all be running around like our hair is on fire demanding our governments move heaven and earth to prevent this horror from being unleashed upon our world. If his claims are not true then a US news network just aired brazen disinformation about a matter of unparalleled importance, and ironically did so right after the US State Department published a lengthy report on the dangers of Russian disinformation on RT and Sputnik (which was in turn ironic because, as The Dissident explains, the report is itself packed full of disinfo).

Fellow virulent Russia hawk Michael McFaul appeared in the same MSNBC segment as Vindman but took a less hysterical approach, saying he doesn’t know what Putin is going to do. McFaul said that between doing nothing and launching a full-scale ground invasion Putin also has options like “cyber attacks, limited aircraft attacks, artillery attacks, seizing Donbass, attacking and then retreating without bringing any soldiers in.” McFaul later claimed that Biden was too focused on opposing China during his first year in office, causing the Russia situation to get out of control.

“I am very prepared to just flat-out state that we are on the cusp of war,” Vindman countered in disagreement with his fellow propagandist, citing as evidence a movement of Russian troops into western Russia while conveniently omitting the fact that thousands of them have since withdrawn from the area.

Now what? Diplomacy looks to be a dead-end & the U.S. & West have done little on deterrence. Russia's offensive against Ukraine will be the largest in Europe since World War II & there is nothing effective being done to avert it. Start working contingencies & arm Ukraine. https://t.co/r2C6aS8ftl

Nothing either of these clowns say should be taken as true; any random schmuck off the street would be better-qualified to offer opinions on Russia than dopey mainstream liberal pundits who’ve spent the last five years being consistently wrong about that nation. But we should take very seriously the fact that they are working to insert these narratives into public consciousness.

To my knowledge Russian state media have not been telling Russians that a world war between nuclear-armed nations is “all but certain”. To the best of my knowledge only western propagandists are indoctrinating westerners with such madness. You can learn a lot by simply watching who is pushing what narrative.

The idea that it’s already too late to stop a world war-level conflict with a nuclear superpower is profoundly dangerous. If the public can be manipulated into accepting this as fact then their priorities shift from insisting that their leaders prevent this unthinkable event from being inflicted upon our world to supporting whatever might protect them and their loved ones from being destroyed by it. We collapse into the same learned helplessness we’re trained to sink into when we’re told that a given political candidate is inevitable or a given grassroots effort is doomed to fail.

And if that mind virus does take hold we may be certain that the same brainwashed human livestock who’ve been scoffing at us for warning that all the cold war escalations over these last few years can lead to hot war will be the very first to doublethink their way into a complete cognitive 180 and begin assuring us that hot war is inevitable so there’s no use trying to prevent it.

Someone benefits from all this, and it isn’t you.

.@SenatorWicker: "Vladimir Putin is the neighborhood bully, and he's never gotten a bloody nose from anything he's ever done. […] I do think the people of Ukraine this time will resist whatever happens, and it would be a mistake that Putin would regret for a long, long time." pic.twitter.com/6C2L8paHVB

This comes as withered gerontocrats in the US government bravely proclaim that it’s time to give Putin a “bloody nose” over the latest tensions. It comes as tons of US-supplied weapons pour into Ukraine, and it comes as the US president himself announces that he believes a Russian invasion of Ukraine is likely. These people are playing games with the lives of everyone on our planet, and they don’t even seem to understand that that’s what they’re doing.

This is so, so dangerous, and there don’t seem to be any adults behind the wheel. We’re being pied pipered off a precipice from which there is no return by blind men with their hands in their pants.

We the citizens of this planet cannot allow this to continue. We’ve got to find some way to stop these pricks.