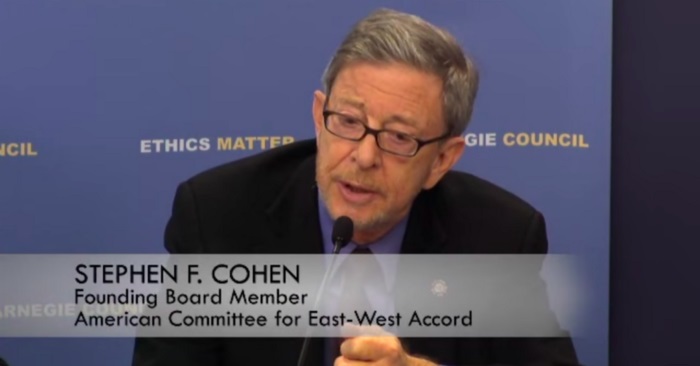 Chris Hedges introduces his latest article for Scheer Post, titled “Chronicle of a War Foretold”, with the following:

“After the fall of the Soviet Union, there was a near universal understanding among political leaders that NATO expansion would be a foolish provocation against Russia. How naive we were to think the military-industrial complex would allow such sanity to prevail.”

Imperial narrative managers have been falling all over themselves working to dismiss and discredit the abundantly evidenced idea that Russia’s invasion of Ukraine was due largely to Moscow’s fear of NATO expansion and the refusal of Washington and Kyiv to solidify a policy that Ukraine would not be added to the alliance.

Putin's horrific invasion of Ukraine has NOTHING to do with NATO expansion! Stop please.

Rep. @Malinowski: "The mask is totally off of Putin. In case anyone had any doubts, this is nothing to do with NATO expansion. It has everything to do with his belief that Ukraine has no right to exist. The very existence of Ukraine is offensive to him." pic.twitter.com/i0VS3ChMHG

If you think the #RussiaInvasion has much to do with NATO enlargement, this analysis provides many fact-based reasons to think again.

Thanks to great experts on the topic: @PopovaProf and @OxanaShevel#Ukrainehttps://t.co/M0UpxzgKC7

It makes sense that they would have to do this. After all, if westerners were to get it into their heads that this whole terrible war could have been avoided by simply solidifying a policy of neutrality for Ukraine and issuing a guarantee that it would never be added to NATO, they would begin asking why this did not happen. NATO powers had no interest in adding Ukraine to the alliance anyway, so it doesn’t really make sense to refuse to make such low-cost concessions if the only alternative is mass military slaughter. I mean, unless your goal was to provoke mass military slaughter to advance your own geostrategic objectives.

So they work hard to present the narrative that the invasion has nothing to do with NATO at all, and occurred solely because Putin is an evil madman who hates freedom and wants to destroy democracy. Most western analysis goes no deeper than this:

Why would Putin want to invade Ukraine?
Because he wants democracy to fail, and not just in Ukraine https://t.co/ome1TZMvn0

Check out this 2015 video clip by John Mearsheimer, for example:

Or this one by the late great Stephen F Cohen back in 2010:

The late historian Stephen Cohen in 2010: “There has been a tremendous expansion of America's sphere of influence since the mid-1990s…with all the while, every American administration saying to Russia…‘You cannot have a sphere of influence because that’s the old thinking.’” pic.twitter.com/99vw2SlW0N

Or this excerpt from a summary by The Nation of points made by Cohen in a 2017 dialogue with John Batchelor titled “Have 20 Years of NATO Expansion Made Anyone Safer?”:

NATO promises that Georgia might one day become a member state was an underlying cause of the Georgian-Russian war of 2008, in effect a US-Russian proxy war. The result was the near ruination of Georgia. NATO remains active in Georgia today.

Similar NATO overtures to Ukraine also underlay the crisis in that country in 2014, which resulted in Russia’s annexation of Crimea, the still ongoing Ukrainian civil war in Donbass, and in effect another US-Russian proxy war. Meanwhile, US-backed Kiev remains in profound economic and political crisis, and Ukraine fraught with the possibility of a direct American-Russian military conflict.

Today, those who want to arm Ukraine are demanding that Russia cease all of its activities in Ukraine, withdraw from Crimea, and let Ukraine join the EU and/or NATO if it wants and if it meets the membership requirements. In other words, they expect Moscow to abandon its own interests in Ukraine, full stop. It would be wonderful if Western diplomacy could pull off this miracle, but how likely is it? Given Russia’s history, its proximity to Ukraine, and its long-term security concerns, it is hard to imagine Putin capitulating to our demands without a long and costly struggle that will do enormous additional damage to Ukraine.

The solution to this crisis is for the United States and its allies to abandon the dangerous and unnecessary goal of endless NATO expansion and do whatever it takes to convince Russia that we want Ukraine to be a neutral buffer state in perpetuity. We should then work with Russia, the EU, and the IMF to develop an economic program that puts that unfortunate country back on its feet.

Or this from George Kennan right after the US Senate approved NATO expansion all the way back in 1998:

“I think it is the beginning of a new cold war. I think the Russians will gradually react quite adversely and it will affect their policies. I think it is a tragic mistake. There was no reason for this whatsoever. No one was threatening anybody else. This expansion would make the founding fathers of this country turn over in their graves… Of course there is going to be a bad reaction from Russia, and then [the NATO expanders] will say that we always told you that is how the Russians are — but this is just wrong.”

Or how about now-CIA Director William Burns’s 2008 memo to then-Secretary of State Condoleezza Rice:

“Ukrainian entry into NATO is the brightest of all redlines for the Russian elite (not just Putin). In more than two and a half years of conversations with key Russian players, from knuckle-draggers in the dark recesses of the Kremlin to Putin’s sharpest liberal critics, I have yet to find anyone who views Ukraine in NATO as anything other than a direct challenge to Russian interests.”

Or what the last US ambassador to the USSR Jack Matlock recently wrote about the Ukraine conflict, calling it “an avoidable crisis that was predictable, actually predicted, willfully precipitated, but easily resolved by the application of common sense”:

In 1997, when the question of adding more members to the North Atlantic Treaty Organization (NATO), I was asked to testify before the Senate Foreign Relations Committee. In my introductory remarks, I made the following statement: “I consider the Administration’s recommendation to take new members into NATO at this time misguided. If it should be approved by the United States Senate, it may well go down in history as the most profound strategic blunder made since the end of the Cold War. Far from improving the security of the United States, its Allies, and the nations that wish to enter the Alliance, it could well encourage a chain of events that could produce the most serious security threat to this nation since the Soviet Union collapsed.”

So many people who’ve worked hard to gain an understanding of the Russian government have been warning for years that NATO expansionism would lead to a disastrous conflict, strongly emphasising Ukraine as a powderkeg where that conflict could ignite. Yet we’re being asked to believe that what we’re seeing in Ukraine has nothing whatsoever to do with NATO expansion and is due rather to Vladimir Putin simply being evil and wanting to ruin everything.

The aforementioned Michael McFaul even goes so far as to pretend this thing we were warned about for decades was never anything anyone ever mentioned until the end of last year:

Imperial spinmeisters have even gone so far as to deceitfully claim Putin makes no mention of NATO in a speech about intervening in Ukraine and citing that as evidence that he’s just a land-grabbing Hitler-like monster, hoping no one would fact check them:

When he most certainly did:

I've seen numerous pundit-hawks point to Putin's speech today as the definitive evidence that all of this is about imperial ambitions and has nothing to do with NATO…even though Putin again specifically mentions NATO expansion in the speech. Dishonesty or laziness? pic.twitter.com/57Nwlpu2qu

So I dunno, if experts have been warning for many years that NATO expansion would provoke an attack, and the guy launching the attack is explicitly citing NATO expansion as a driving motive for his actions, it seems like maybe it’s sorta kinda got something to do with NATO expansion.

Which would be great news, because it would mean that the US and its allies actually have a lot more power to end this war than they’ve been letting on, and no good reason not to do so immediately.

Scott Ritter: Point of No Return in NATO Expansions