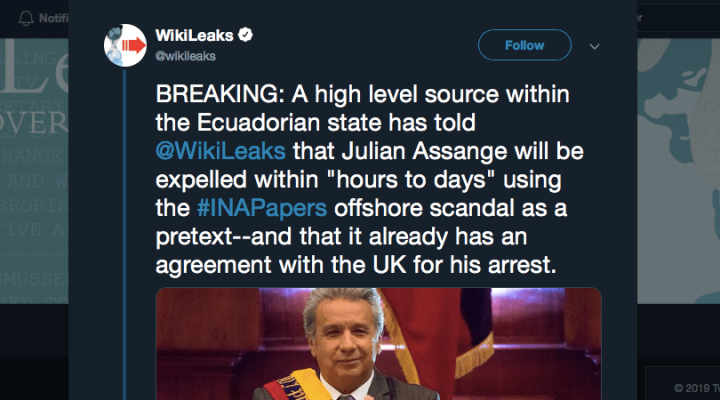 The WikiLeaks Twitter account has announced that it has high level information that the organization’s founder Julian Assange could have his political asylum the Ecuadorian embassy revoked for him to be arrested by the British government within hours. We need to be ready to shake the earth should this happen. We need all hands on deck for this one.

“BREAKING: A high level source within the Ecuadorian state has told @WikiLeaks that Julian Assange will be expelled within ‘hours to days’ using the #INApapers offshore scandal as a pretext–and that it already has an agreement with the UK for his arrest,” the leak publishing outlet tweeted, with a link to a story about the INA Papers leak.

The pretext that is being used is almost irrelevant, because it has nothing to do with truth or reality. Assange has been a target of the US-centralized power establishment ever since WikiLeaks began publishing authentic documents exposing the malfeasance of its leaders a decade ago, and strings are being pulled around the world to funnel him into its jaws. That’s all that this is, but it should surprise no one that the pretext is bogus as well. Journalist Elizabeth Vos wrote an article for Consortium News the other day summarizing the false narrative being spun by the Ecuadorian government that the conditions of asylum have been violated by the WikiLeaks account (not Assange) tweeting about a scandal that has rocked Ecuador’s president Lenin Moreno.

BREAKING: A high level source within the Ecuadorian state has told @WikiLeaks that Julian Assange will be expelled within “hours to days” using the #INAPapers offshore scandal as a pretext–and that it already has an agreement with the UK for his arrest.https://defend.wikileaks.org/2019/04/03/ecuador-twists-embarrassing-ina-papers-into-pretext-to-oust-assange/ …

BREAKING: WikiLeaks now has secondary confirmation from another high level source within the Ecuadorian state.

1,180 people are talking about this

To be clear, it is a known fact that the US government is working to arrest and imprison Assange, not for the Russia stuff that has had establishment loyalists so excited over the last couple of years, but for the 2010 leaks exposing US war crimes. The US has an extradition treaty with the UK, and the British government has refused to comment on whether or not it has received an extradition request for the Assange arrest that we absolutely know for a fact is an existing US government agenda. This would be the same US government which tortured Chelsea Manning after refusing her a fair trial.

If Assange is arrested and prosecuted under the Patriot Act, it will be a devastating blow to press freedomsand constitute a greater leap in the direction of Orwellian dystopia than the Patriot Act did. The US government exercising the ability to imprison journalists for simply publishing facts about it, not just in America but anywhere in the world, will be a poisoned dagger in the heart of the world population’s ability to bring any transparency or accountability to that titanic power structure.

“WikiLeaks reports that Julian Assange is on the verge of being expelled from the Ecuadorean Embassy in London,” tweeted the legendary journalist John Pilger in response to today’s news. “Please fill the street outside the embassy and protect him, and show solidarity with a courageous man, whose struggle ought to touch us all.”

WikiLeaks reports that Julian Assange is on the verge of being expelled from the Ecuadorean Embassy in London. Please fill the street outside the embassy and protect him, and show solidarity with a courageous man, whose struggle ought to touch us all. https://twitter.com/wikileaks/status/1113919962995884033 …

BREAKING: A high level source within the Ecuadorian state has told @WikiLeaks that Julian Assange will be expelled within “hours to days” using the #INAPapers offshore scandal as a pretext–and that it already has an agreement with the UK for his arrest.https://defend.wikileaks.org/2019/04/03/ecuador-twists-embarrassing-ina-papers-into-pretext-to-oust-assange/ …

5,756 people are talking about this

We are about to find out if this is the part of the movie where the empire rips off the mask of freedom and democracy and reveals its true tyranny. Assange is a soft target, a controversial figure who has been on the receiving end of wildly successful smear campaigns marketed to every major political faction across the western world. He is the logical place to begin a crackdown on press freedoms and make a public example of what happens to those who shine the light of truth upon Big Brother.

If we allow them to imprison Julian Assange for practicing journalism, that’s it. It’s over. We might as well all stop caring what happens to the world and sit on our hands while the oligarchs drive us to ecological disaster, nuclear annihilation or Orwellian dystopia. If we, the many, don’t have the spine to stand up against the few and say “No, we get to find out facts about you bastards and use it to inform our worldview, you don’t get to criminalize that,” then we certainly don’t have the spine it will take to wrest control of this world away from the hands of sociopathic plutocrats and take our fate into our own hands.

The arrest of Julian Assange would be the fork in the road. It would be where we collectively decide as a species whether we want to survive into the future, and if we deserve to.

Heads Up: the friends and supporters of 2019 Nobel Peace Prize Nominee Julian Assange will NOT let him be taken into the arms of torturers quietly.

We are organising en masse as I write this.

Eyes on the hashtag #ProtectJulian and amplify!!

680 people are talking about this

So be ready to shake the earth if they decide that this is a good time to sink their talons into him. If they touch one silver hair on that man’s head, we must unleash relentless worldwide outrage the likes of which they have never before seen. Because we’re not just fighting for Assange, we’re fighting for our very survival.

Jeremy Corbyn has spoken out in defense of WikiLeaks and Assange in the past. His moral character combined with his continual rise toward the leadership of the British government may partly explain the rush to arrest Assange as quickly as possible. In what was in my opinion one of the most exciting occurrences in wester politics recently, Corbyn read an excerpt from Percy Bysshe Shelley’s “The Masque of Anarchy” before an audience of thousands at the 2017 Glastonbury festival.

“Rise, like lions after slumber
In unvanquishable number!
Shake your chains to earth like dew
Which in sleep had fallen on you:
Ye are many — they are few!”

If Assange is arrested, that will be our cue to rise like lions from our slumber, which has gone on far too long at far too great a cost. We cannot permit them to use, exploit and oppress us like this anymore. We are the many. They are the few. Be ready to rise.

0 thoughts on “Be Ready To Act: WikiLeaks Source Says They’re Coming For Assange”