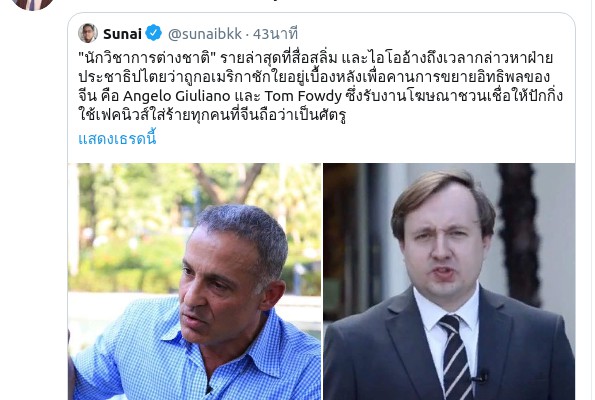 Prominent anti-government leader Francis J. Bunkueanun P. – who recently made headlines by leading protests who attempted to block the Thai Queen and her son’s car – has now made death threats against two prominent geopolitical analysts who have worked to expose US government funding behind ongoing unrest in Thailand.

These motherfuckers are on my kill-list.

Below his death threats were pictures of Angelo Giuliano and Tom Fowdy who have been active in exposing US government funding behind unrest in Hong Kong, China and now Thailand.

Francis has been hailed as a heroic figure amid US-funded agitation in Thailand. After blocking the Thai Queen’s car and being detained by police – the Western media and Western-funded fronts posing as human rights advocates rushed to his defense claiming he did nothing wrong and was a victim of circumstances.

With his recent death threat made publicly and blatantly in violation of not only Thailand’s laws, but laws internationally, his character and mentality is now fully exposed.

A similar story could be told of many of Thailand’s so-called “pro-democracy” movement – agitators whose true character and crimes are actively covered up by the Western media and US-funded NGOs.