China’s COMAC C919 Passenger Jet and a Leap for Multipolarism 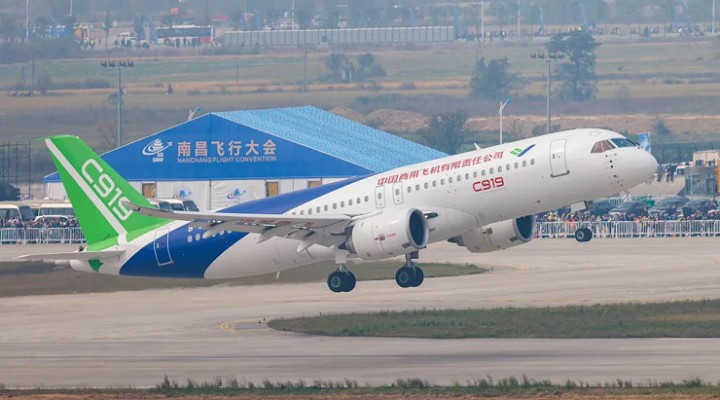 Right at the end of 2022 the first of China’s COMAC (Commercial Aircraft Corporation of China) C919 airliner jets was delivered to a domestic Chinese airline company, China Eastern Airlines.

The world’s first C919, a Chinese-made narrowbody jet, was delivered to launch customer China Eastern Airlines (CEA) in Shanghai on Friday and took off for a 15-minute flight to mark the historic moment.

The plane, a rival to the Airbus (EADSY) A320neo and Boeing (BA) 737 MAX single-aisle jet families, is expected to make its maiden commercial flight next spring, according to state-owned Xinhua News Agency.

Between delivery and its first commercial flight, the first C919 will undergo up to 100 hours of flight tests, Simply Flying has reported. The test flights will include flying between multiple destinations. Meanwhile China Eastern has already trained a range of personnel to operate the aircraft including 9 pilots, 24 flight attendants, and 13 maintenance personnel.

The milestone is obviously a major achievement for COMAC, China Eastern, and the People’s Republic of China, but it is also a leap forward for multipolarism.

More than Airplanes at Stake

Together with Russia’s Irkut MC-21 airliner which is already certified to fly, and the prospect of both aircraft and the companies behind them fulfilling not only domestic but also international demand, the duopoly enjoyed by the West’s Boeing and Airbus corporations may be coming to an end.

Germany’s Deutsche Welle in an article titled, “New competition for Airbus and Boeing,” would note:

New aircraft are entering the highly lucrative main segment of the airliner market. And Airbus and Boeing need to take it seriously. The MC-21, in particular, could offer superior performance in some areas, compared to the common types of Airbus and Boeing now being sold. And it is no wonder as the giants from America and Europe have been resting on their laurels for many decades: The Boeing 737 traces its origins back to 1967, while the Airbus A320 premiered in 1987.

However, China with a population larger than that of the G7 combined, has a potential air travel market that could boost COMAC and other Chinese aerospace companies regardless of its access to international markets. Russia and adjacent markets provide the MC-21 with similar prospects of being sold in large numbers, proving themselves and becoming appealing and accessible to a larger number of nations over time.

Acutely aware of the impact and intentions of US sanctions, both Russia and China are developing alternatives to components they once depended on the West for including engines and control systems.

Multipolarism is not merely a political declaration or desire for an alternative international order to the Western-led unipolar “rules-based” order that currently prevails. It is the physical creation of alternative systems of financing and trade but also of industry and production.

This is what makes the potential success of China’s C919 and Russia’s MC-21 particularly important. Their success will chip away at the concentrated power and influence of the West’s duopoly in an industry that is notoriously complex and difficult to enter. The success of the C919 and the MC-21 would provide a case study and an example for future success not only in China and Russia but in other emerging industrialized economies.

More than mere greed and the jealous protection of their duopoly, Boeing and Airbus and the circles of special interests around them realize that this is more than just selling airplanes, it is about either preserving or displacing Western hegemony.

China’s C919 together with other products from ever expanding Chinese companies across a wide and growing range of industries is what accounts for China’s rise on the global stage and the subsequent tensions between Beijing and a Washington who refuses to accept that rise.

Understanding the industrial and economic factors that underpin the political aspects of multipolarism help us understand the decisions being made in both Washington and Beijing in terms of sanctions the US seeks to impose and methods used by China to circumvent and rise above them. The continued development and expanding adaptation of the C919 and the MC-21 seem inevitable. Had the West recognized and respected these new players they would have shared in the prosperity these new airliners will produce. Both aircraft used Western parts including engines manufactured by Pratt & Whitney. Because of Washington’s determination to sabotage the development of these aircraft, both China and Russia either have or are in the process of developing indigenous alternatives. These engines will eventually be adopted domestically and once proven, enter into global markets and likely outcompete their Western counterparts.

Just as the US has isolated itself politically through its overdependence on sanctions, it is creating more problems than it is solving for its industry.

Only time will tell when and to what extent Chinese and Russia aerospace companies and their products begin competing for significant market shares with Boeing and Airbus, but when they do it will be more than just aerospace companies and profits at stake, it will also be the wealth, power, and influence that come with those profits up for grabs and a future decided either unilaterally in Washington or via multipolarism beginning in Beijing and Moscow.