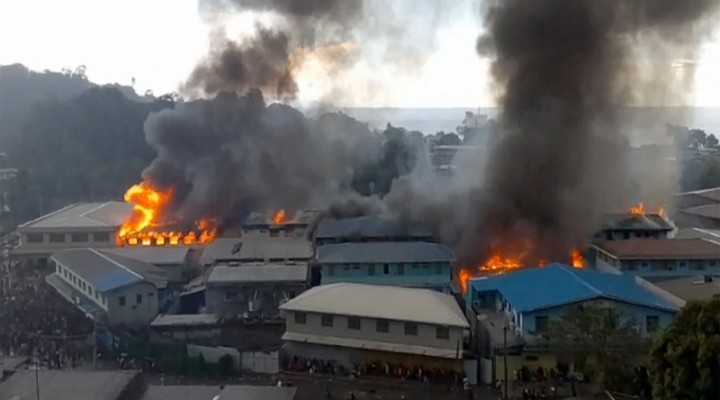 What this Hybrid War on the Solomon Islands has thus far shown is that small nations which switch their recognition from Taipei to Beijing will be punished through the external exacerbation of their preexisting identity tensions for regime change ends.

The Solomon Islands was recently destabilized by large-scale riots that prompted the government to request a military intervention from its historical Australian allies and nearby Fiji. The unrest was driven by people from the country’s most populous island, Malaita, who traveled to the capital on Guadalcanal to protest against the government’s recognition of Beijing as the legitimate government of China in late 2019. That move prompted the province to flirt with separatist aspirations a year later, which were also promoted during last week’s riots.

The author asked at the time, “Is The Quad Plotting To Provoke A Proxy War With China In The Solomon Islands?” The basis for this prediction was that Malaita is openly loyal to Taipei while Honiara, the capital of the Solomon Islands, nowadays supports Beijing. The issue of Taiwan’s status is an extremely symbolic and highly strategic one for both China and its Quad rivals. For that reason, the author predicted that tensions would eventually boil over in order to destabilize this new Chinese-friendly government.

Prime Minister Sogavare claimed that the recent riots were incited from abroad and aimed to carry out a regime change against him while the Chinese Foreign Minister expressed confidence that they’ll fail to disrupt bilateral ties. These official statements lend credence to the author’s prediction last year about a brewing plot to punish the Solomon Islands for recognizing Beijing in a way that relies heavily upon the Malaita factor to disguise the true motivation behind the expected unconventional acts of aggression. It can therefore be concluded that the latest events perfectly fit into the predicted model.

The requested Australian military intervention added a curious twist to this Hybrid War since that country is fiercely against China nowadays yet just dispatched troops to prop up this nearby Chinese-friendly government despite the criticism that this provoked from Malaita’s leader. Canberra helped Honiara in order to advance several objectives: preempt a possible Chinese intervention in that country’s support; flex its regional leadership; and possibly set the basis for a Quad-led “peacekeeping” mission in the future, one which might ultimately lead to an independence referendum for Malaita.

Evidently, Australia doesn’t feel comfortable “surrendering” its historical influence in the Solomon Islands, especially not after literally being requested by its government to once again militarily intervene there. This shows that Canberra plans to compete with Beijing for influence, which it might begin doing in increasingly creative ways. It remains unclear whether it had a role in provoking the latest riots, but one can likely exclude that scenario since the Solomon Islands wouldn’t have realistically asked it to dispatch troops to quell the riots if it had any credible suspicion that it did.

That, however, doesn’t mean that the other Quad countries’ potential involvement can be dismissed. The US might have worked together with Taiwanese intelligence in order to engineer last week’s regime change scenario. Australia’s requested intervention could thus lead to the Quad playing a game of “good cop, bad cop” whereby Canberra fulfills the former role while Washington fulfills the latter. That would give the alliance maximum strategic flexibility in shaping events. Australia might even soon be expected to offer reconstruction aid to the Solomon Islands to pair with the US’ existing aid to Malaita.

What this Hybrid War on the Solomon Islands has thus far shown is that small nations which switch their recognition from Taipei to Beijing will be punished through the external exacerbation of their preexisting identity tensions for regime change ends. Even if these kinetic provocations fail to overthrow those new Chinese-friendly governments, they’ll still serve as politically convenient pretexts for the US and its allies to exert influence over them, even if initially in the form of support in quelling the same disturbances that the Quad was responsible for provoking. All of this could complicate Chinese diplomacy.