Nigeria’s Racing Towards A Nightmare Scenario 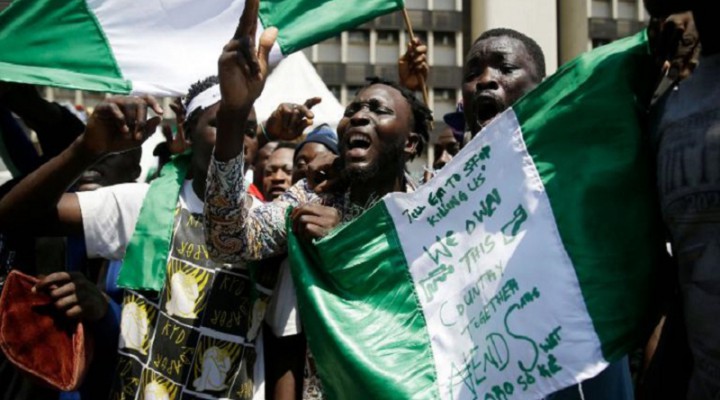 The sudden outbreak of multisided violence in Nigeria’s largest city is pushing Africa’s most populous country towards the nightmare scenario of full-fledged destabilization which could have tremendous humanitarian and geopolitical consequences if it isn’t stopped before the situation spirals even further out of control.

The world’s attention abruptly turned towards Africa’s most populous country on Wednesday after the sudden outbreak of multisided violence in Nigeria’s largest city of Lagos. The situation is still extremely fluid and there isn’t any consensus on exactly what happened except that the security services and protesters clashed over the contentious issue of the Special Anti-Robbery Squad (SARS) that was earlier accused by Amnesty International of committing very serious human rights violations. Some accounts claim that the security services opened fire on peaceful protesters, others say that the protesters themselves started attacking the security services without provocation and were therefore the first to cross the escalation threshold, while another interpretation is that provocateurs (possibly sent by the government) infiltrated the protest and provoked the second-mentioned scenario. At least a dozen people have been killed according to Amnesty International’s estimate and Lagos was placed on a 24-hour curfew.

An Inordinate Amount Of International Attention

Casual observers might be surprised by how much attention this event has generated since much worse acts of violence routinely happen in other parts of African such as Burkina Faso and the Congo but rarely become mainstream news. Nigeria’s situation is different since it’s Africa’s most populous country and largest economy, which means that it simply can’t be ignored. In addition, the Nigerian diaspora is very patriotic and passionate about their homeland, which greatly helps to raise awareness about events there. So quickly did this violence go viral that many American celebrities soon chimed in on social media to offer their support to the anti-SARS protesters, which might have either been sincerely expressed or just a shrewd business calculation. Regardless of their motivation, they helped ensure that everyone in the world was talking about Nigeria, which also happened to coincide with both Democratic presidential candidate Biden‘s and former Secretary of State Clinton‘s condemnations of the government.

Before discussing the dark scenarios that might soon unfold in the near future, it’s important for the reader to obtain a better understanding of how everything got to this point. Nigeria’s cosmopolitan society has many pent-up frustrations, both general ones such as economic and anti-corruption issues but also more particular grievances related to the interests of its many different identity groups (oversimplified for brevity’s sake along the regional North-South and religious Muslim-Christian axes as well as ethnic). The state, which has historically been under the heavy influence of the military, is feeling this pressure and might also have its own legitimate concerns related to its fear that sudden destabilizations could spiral out of control and “Balkanize” the country according to the Hybrid War scenarios that the author identified in his extensive 2017 strategic risk study. The presently identity-diverse anti-SARS movement is agitating for structural reform of the security services while their target is cautious about changing too much too quickly for fear of losing its capabilities and control.

The state’s superficial reform of disbanding SARS and promising to replace it with a new Red Cross-trained police unit didn’t satisfy the protesters who want its former members to be held to account instead of simply redeployed to other units. They also don’t trust that new training would be sufficient for ensuring that the alleged abuses don’t repeat themselves and are therefore calling for more oversight, transparency, and psychological evaluation of the new unit’s officers. From the security service’s perspective, this might hamstring their ability to thwart legitimate threats even though it would provide a strong safeguard against their representatives committing more humanitarian abuses against the populace. Following the outbreak of violence that resulted from unclear circumstances, both sides apparently went wild attacking the other, with the rioters torching many buildings including the High Court of Lagos while the security services literally hunted some of them down in the streets and might have even killed innocent people.

Several scenarios can develop apart from the best-case one of de-escalation. The first is that the security services (indefinitely?) impose a harsh martial law-like regime, using that time to round up suspects and possibly even terrorize the population by targeting innocent people too with the (counterproductive) intent of forcing them into submission and deterring any repeat of the riots. The second is that the clashes continue, albeit with differing frequency and intensity irrespective of whether the martial law-like regime is extended. This and the third scenario of wider unrest that spreads throughout the country could be exploited by more identity-specific groups (ethnic, regional, religious, etc.), including those that utilize terrorist means. All four scenarios can radicalize people to the point where they’re susceptible to those aforementioned groups’ messages, lead to significant international pressure through sanctions and other means, and/or result in regime tweaking (reform), regime change (self-explanatory), or a regime reboot (radical constitutional change).

Regardless of what transpires, a few observations can be made about what’s happened thus far. The first is that the anti-corruption movement has thus far proven its ability to unite many of Nigeria’s diverse people under the banner of a single cause, which is significant. Secondly, their protests were facilitated by mobile phone and social media proliferation, which is booming in Nigeria. Thirdly, although elements of Color Revolution technology are being employed, it’s not black and white in the sense that it shouldn’t automatically be assumed that this means that a foreign hand is behind the events or that the cause itself is illegitimate. The fourth point is that the protest movement has been able to bring so many people out into the streets simply because they have the opportunity to protest since many don’t have formal jobs, if any at all, thus speaking to the political consequences of Nigeria’s economic challenges that could be exacerbated by sanctions. And fifth, self-sustaining cycles of unrest aren’t difficult to provoke in tense contexts regardless of which side is to blame.

The worst-case scenario that nobody wants to see happen is that the anti-SARS situation escalates to the point of a national crisis which risks triggering the collapse of Africa’s largest country by worsening its many fault lines to the point of a multisided civil war. Thus far, the chances of that happening are low, but still shouldn’t be discounted. From the Western perspective, a slightly less terrible scenario would be that the state doesn’t concede to the protesters’ demands despite what might be heavy sanctions pressure in the coming future. Under those circumstances and especially if the violence continues to rage, the population might become more desperate and radicalized while the authorities might pivot more closely to China in response to being rebuffed by its then-former Western partners. In that event, even if a regime tweaking/change/reboot eventually commences, the West’s top geopolitical rival might be able to deepen its influence within the country to the point of ensuring that such outcomes don’t endanger its newfound entrenchment of interests there.

It’s difficult to tell what will happen next in Nigeria since no observer has enough information about the protest movement, international pressure plans, and the security services’ calculations to make very accurate predictions about this dynamic situation. Nevertheless, it’s still possible to analyze the origins, recent development, and larger contours of this situation in order to obtain a better understanding about everything as a whole like the author has sought to do. This should hopefully assist observers in tracking relevant trends related to these possibly emerging crisis that could thenceforth facilitate the creation of more finely tuned analytical products for better forecasting its possible evolution. Although the situation seems to be an entirely domestic one at the moment, the upsurge of international attention from influential political figures hints that foreign players might soon try to indirectly influence the course of events through sanctions or even more directly by supporting certain anti-government forces, which could make everything much worse.

0 thoughts on “Nigeria’s Racing Towards A Nightmare Scenario”