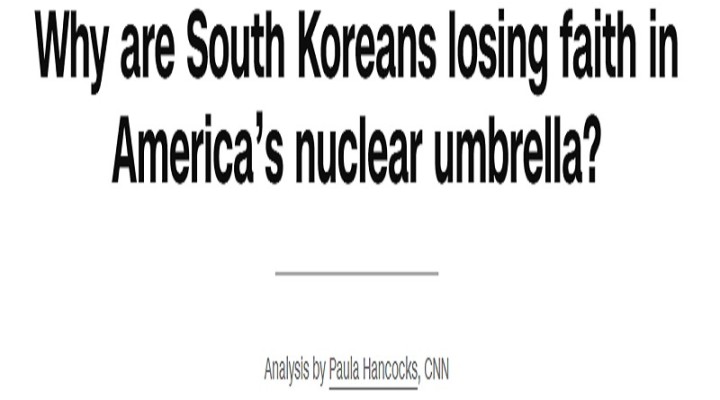 South Korea has no independent agency when it comes to this sensitive subject since it’s unrealistic to expect it to defy Washington’s will by going forward with a nuclear weapons program without its military patron’s permission.

CNN is perhaps the most pro-Democrat Mainstream Media (MSM) outlet in the world, which is why it’s curious that one of its recent articles implied that the Biden Administration has failed to secure South Korea’s trust in the US’ mutual defense commitments to that country. In their article asking “Why are South Koreans losing faith in America’s nuclear umbrella?”, Seoul-based international correspondent Paula Hancocks claimed that her host’s society doubts that Washington would really protect it.

“The Republic Of Korea Mustn’t Obtain Nuclear Weapons No Matter What” because this could trigger an uncontrollable nuclear arms race, which the writer herself admittedly also acknowledges in her article, yet Hancocks’ piece nevertheless still serves to justify that country’s nuclear ambitions. In fact, it’s arguably a very clever psychological operation intended to make it seem like this scenario is beyond the US’ control and might very well be a fait accompli even though neither are truly the case.

South Korea has no independent agency when it comes to this sensitive subject since it’s unrealistic to expect it to defy Washington’s will by going forward with a nuclear weapons program without its military patron’s permission. Rather, what appears to be happening after President Yoon Suk-yeol’s shocking declaration of this intent earlier in the month (which he subsequently walked back though his words were unconvincing) is that the MSM is now preconditioning the public to expect this scenario.

To that end, CNN is taking the lead with its latest front page article explaining why Seoul might supposedly defy the US by independently developing up to 4,000 nuclear weapons in response to alleged public pressure generated by supposed doubts over Washington’s mutual defense commitments. This angle is meant to artificially manufacture the false narrative that South Korea’s nuclear weapons program would be aligned with so-called “democratic values”.

There are several reasons not to take CNN’s piece at face value. First, as was earlier mentioned, it’s perhaps the most pro-Democrat MSM outlet in the world so it comes off as insincere that Hancocks claims that Biden failed to secure South Korea’s trust in his declining unipolar hegemon’s mutual defense commitments. Second, although she attempts to strike a balance between pros and cons in her article, she’s clearly implying in her piece that Seoul’s nuclear ambitions are justified.

Third, the purpose behind this psy-op is to proactively manipulate Western perceptions on this sensitive issue, particularly with respect to making it seem like the US wouldn’t be involved in this scenario even though it’s unrealistic to expect that Washington wouldn’t have a hand in it. Fourth, this “plausible deniability” is intended to help the US “save face” in the increasingly probable event that South Korea violates the Nuclear Proliferation Treaty (NPT) by deciding to develop nuclear weapons.

And fifth, all of this is aligned with the US’ “Lead From Behind” stratagem of supporting some of its regional vassals’ aggressive ambitions in order for them to “share the burden” of containing multipolar leaders like Russia and China, exactly as it’s presently doing with Germany and Japan respectively. South Korea figures into this model since it’s the US’ top mainland outpost in Asia, hence why the sequence of destabilizing events that Washington is encouraging Seoul to catalyze should be followed very closely.