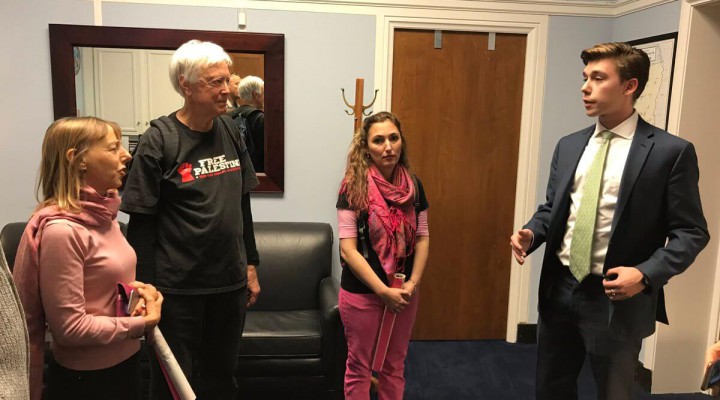 MPN- “Instead of her [Rep. Tlaib] talking about things, she’s new here, she ought to listen and learn and open her mind and then come to some conclusions.” — Representative Eliot Engel (D-NY), chairman of the House Foreign Affairs Committee.

Representative Rashida Tlaib (D-MI), the first Palestinian American elected to Congress, is encountering roadblocks erected by a senior Democrat and a Republican lawmaker in her bid to bring a congressional delegation to the illegally occupied West Bank.

Tlaib’s plans are meant as a rebuke of the tours of Israel sponsored by the American Israel Public Affairs Committee (AIPAC), the leading pro-Israel lobby in the United States. The organization has, for decades, organized trips to Israel for freshman lawmakers to get a crash course in hasbara talking points. In 2017, AIPAC’s sister organization, American Israel Education Foundation, spent $2 million on lawmakers’ trips to Israel but cut down on spending during the 2018 election.

The trips have been criticized by human rights defenders and pro-Palestine advocates for whitewashing the illegal and inhumane occupation of Palestinian territories and for indoctrinating lawmakers into the “liberal Zionist” ideology that posits Israel as the sole beacon of democracy in the Middle East.

Dem. lawmaker exerts his influence to try to cancel the trip

Some Democrats, however, aren’t too keen on the idea of rookie legislators being exposed to alternative points of view when it comes to Israel. “Instead of her talking about things, she’s new here, she ought to listen and learn and open her mind and then come to some conclusions,” Representative Eliot Engel (D-NY), chairman of the House Foreign Affairs Committee, told Al-Monitor. Presumably, Engel believes Tlaib should “open her mind” to the Israel lobby.

“If you’re going to be close-minded and have your views, no one’s going to change her views. But I would hope that once you’re elected to Congress, you would at least care to see the other side of the coin,” Engel added.

In order to get the ball rolling on the trip to the West Bank, Tlaib needs approval from a committee she sits on. Tlaib is on the House Oversight Committee but is not on Engel’s Foreign Affairs Committee. Still, reports Al Monitor, Engel’s “opinion on foreign affairs carries weight with other committee leaders.”

Representative Brian Babin (R-TX), has also petitioned House Speaker Nancy Pelosi and every other committee leader to block Tlaib’s request. Babin argued that Tlaib’s trip would send the wrong message to Israel and that her rhetoric disqualifies her from such diplomatic endeavors. Earlier this month, Tlaib referred to President Donald Trump as a “motherfucker.”

“I want to see something that shows a little bit more discretion and a little better judgment there than what we’re seeing,” Babin told Al Monitor. Babin, who has been in the House since 2014, had no such objections to the diplomatic globetrotting of the late Senator John McCain, who slurred Vietnamese people as “gooks” whom he hates in 2000.

Tlaib has hinted that she may seek funding for the trip from NGO’s if she cannot get the approval from Congress.

51 people are talking about this

On Wednesday, protesters with the anti-war women’s group CODEPINK gained entry to Engel’s and Babin’s offices demanding that they allow “Congress to see the occupation.” Engel’s staff responded by calling the police. 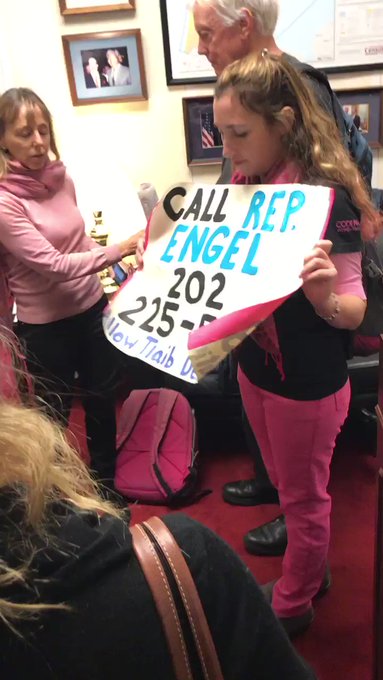 109 people are talking about this

The protest was led by CODEPINK founder Medea Benjamin and national co-director Ariel Gold. Benjamin recently shut down multiple meetings featuring the DC-based supporters of the coup in Venezuela. Last year, Gold, an American Jew, was deported from Israel over her support for the non-violent Boycott, Divestment, and Sanctions movement.

On Wednesday, Gold asked supporters to call Engel’s office to ask “why the Representative does not want to allow Congress to see what’s on the other side of Israel’s apartheid wall” before she was interrupted by someone in the office.

31 people are talking about this

We were so excited when [Tlaib announced that she’d be organizing] a different delegation; she’s going to show people the ‘other side.’

And now, we have some of these old boys, in this old boy network that said ‘there is no other side, there is only one side, and it is the pro-Israel, pro-Netanyahu side.’ So it’s just an amazingly clear example of what people are up against when it comes to the Congress. It has been in the pocket of AIPAC and the right-wing Israeli government.”

0 thoughts on “US Rep. Calls Police on Supporters of Congresswoman Trying to Organize Delegation to West Bank”