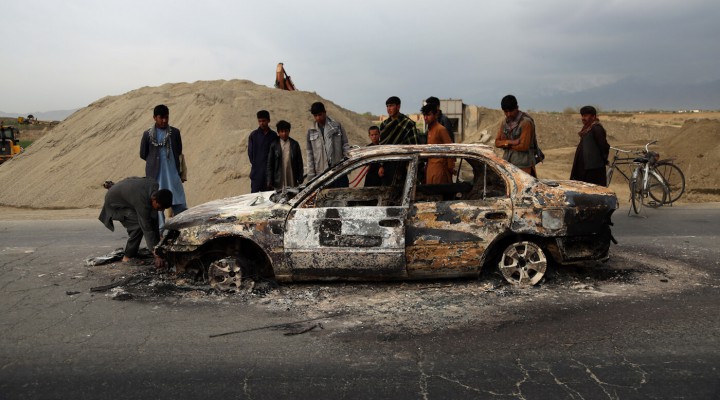 MPN- The Trump administration has increasingly relied on bombing missions in an attempt to turn the tide in Afghanistan, where the Taliban has been able to gain more and more land under its control in recent years.

For the first time in recorded history, the U.S. and the Afghan government, whose forces are trained by Americans, killed more civilians than did the Taliban in the first quarter of 2019, according to a United Nations report. Increased bombing campaigns by the U.S. and increasingly reckless search operations by pro-government forces have fueled the trend reversal.

While the U.S. war in Afghanistan was bloodiest in its infancy, little data is available until 2009, when the UN started keeping track of civilian casualties and the U.S. started accounting for the bombs and munitions it drops on the country.

While the U.S. war in Afghanistan is now in its 18th year, the United Nations only began keeping tabs on civilian casualties in 2009. Overall, civilian casualties decreased in the quarter, largely driven by a 76 percent reduction in suicide bombings.

The UN body found that pro-government forces killed 305 civilians and injured another 303 between January 1 and March 31, 2019, a 39 percent increase from the same period of time in 2018.

In February, the UN stated that 2018 was the deadliest year for Afghan civilians since it began keeping track in 2009.

This past quarter, the bulk of civilian casualties from pro-government forces — some 228, including 145 deaths and 83 injuries — came from “aerial operations,” almost all of which were by the U.S. Women and children “comprised half of the civilian casualties” from such missions.

Let’s see what a bunch more bombs can do!

The Trump administration has increasingly relied on bombing missions in an attempt to turn the tide in Afghanistan, where the Taliban has been able to gain more and more land under its control in recent years.

Near the end of 2018 the Afghan government controlled the smallest amount of territory since a U.S. military watchdog — the Special Inspector General for Afghanistan Reconstruction (SIGAR) — started keeping track in 2015.”

Tadamichi Yamamoto, the UN secretary general’s special representative for Afghanistan, said that “a shocking number of civilians continue to be killed and maimed each day. All parties must do more to safeguard civilians.”

MintPress News reported that in 2018, the U.S. “dropped more bombs on Afghanistan than during any other year on SIGAR record, which goes back to 2009.”

So far, data from SIGAR on U.S. bombs dropped in Afghanistan in 2019 is available only for the months of January and February. In that time, the U.S. dropped 790 bombs and other munitions. In the same time period in 2018, 847 were dropped, meaning that U.S. aerial operations decreased slightly despite becoming more deadly to civilians.

Meanwhile, some pro-government forces have come under increasing scrutiny, which may be responsible for the increase in civilian deaths from “search operations.” As MintPress News recently reported, elite CIA-backed death squads ”are leaving a trail of carnage in the country. As such units do not operate under the umbrella of the Department of Defense, they have been given near-impunity despite standing accused of war crimes.”

Some of those elite squads are reportedly able to call in airstrikes. MintPress News has recounted the harrowing tales of the victims of such units.