The Future is Female (Death Merchants): MSM Celebrates Women in the War Machine 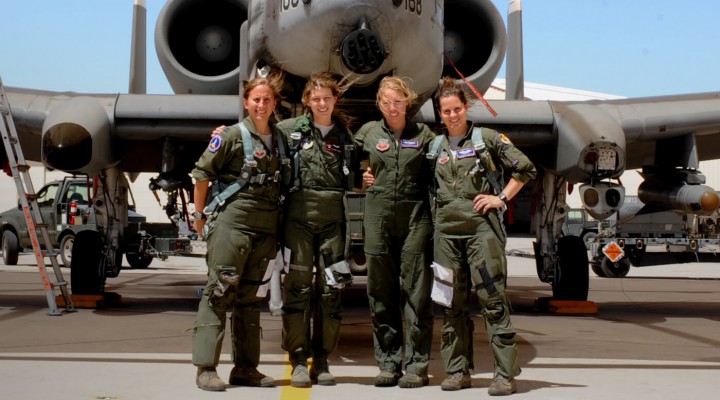 MPN- While it’s significant that Winiecki was the first female F-35 test pilot to complete a mission, it is also significant that the accident-prone, $1.5 trillion dollar boondoggle that is the F-35 completed a mission.

he mainstream media has made a noisy effort over the years to humanize America’s war machine. But now, outlets like MSNBC are doubling down on efforts in 2019, celebrating the feminization of America’s institutions of destruction and foreign sabotage.

You may think you’ve seen it all: from the “humanitarian intervention” canard whitewashing bloody regime-change operations and proxy warfare to fighter jets painted pink to “raise awareness” about breast cancer, to the pinkwashing of the military industrial complex with Lockheed Martin’s sponsorship of Pride festivities and Raytheon being named the “best place to work” for LGBTQ people in 2017 by the nonprofit Human Rights Campaign.

If you thought this alternate universe of benevolent arms peddlers has peaked, you’d be mistaken, and — if you’ll pardon the pun — gravely, at that.

Last week, MSNBC’s Ali Velshi devoted a segment to the military industrial complex. As you may have guessed, it didn’t focus on the revolving door between defense giants and government, America’s bloated military budget and huge handouts to the industry, or anything else that you may think would be provided to you in a “news” report. No, MSNBC celebrated that the chief executives of four of the “big five” defense firms are women.

That segment is entitled “The military-industrial complex is now run by women.”

Meanwhile, earlier this week, NBC News profiled the “sisterhood of spies” taking shape at the Central Intelligence Agency, citing a “U.S. intelligence official” as saying that the CIA is now comprised of nearly 50 percent women.

Moreover, former torture overseer and now director of the agency, Gina Haspel, was the first woman to be appointed to the position and is staffing the upper echelons of the spy agency with other women. Her appointment of Cynthia Rapp to deputy director for analysis marks the first time ever that women have headed all three top directorates of the CIA.

‘With her engaging leadership style and reputation for objectivity, [Rapp] will excel in leading our talented analytic cadre,” said CIA Director of Public Affairs Brittany Bramell.

Congratulations to Sonya Holt. I’m sure that she’ll do an excellent job making sure that when the CIA tries to instigate a coup d’etat against a leftist third world government, agents on the case will be LGBT at a proportional rate to the US population. https://twitter.com/JennaMC_Laugh/status/1032335201882595329 …

CIA Director Haspel appoints multiple additional senior leaders at CIA, including a chief diversity and inclusion officer—an area that had many concerned under leadership of Pompeo, as I had reported.

Haspel also named Sonya Holt to be the chief diversity and inclusion officer in August.

The liberal viral video shop Now This tweeted that such moves constitute “another stride towards progress” on Wednesday.

The CIA's highest level positions are now all held by women — another stride towards progress 💪 pic.twitter.com/Sz4rDw4U7m

Also this week, the U.S. Air Force reached a “significant milestone” in its history, according to a Dayton Daily News article republished by the U.S. military veteran publication Task & Purpose. That because a “female pilot completed a routine F-35 Lightning II flight.”

“I am grateful for the women who have broken barriers previously; they built the path,” the airwoman, Maj. Raechel Winiecki said. “I look forward to the day when sorties like this are a regular occurrence.”

While it’s significant that Winiecki was the first female F-35 test pilot to complete a mission, it is also significant that the accident-prone, $1.5 trillion dollar boondoggle that is the F-35 completed a mission. F-35s are plagued by countless defects — 966 of them as of June, to be precise. Problems with the U.S. military’s most expensive war toy have included an ejection mechanism that poses a “serious risk” of death to pilots and cockpits that cause them to suffocate — so buckle up, ladies!

The Future is Female (Death Merchants): MSM Celebrates Women in the War Machine

0 thoughts on “The Future is Female (Death Merchants): MSM Celebrates Women in the War Machine”