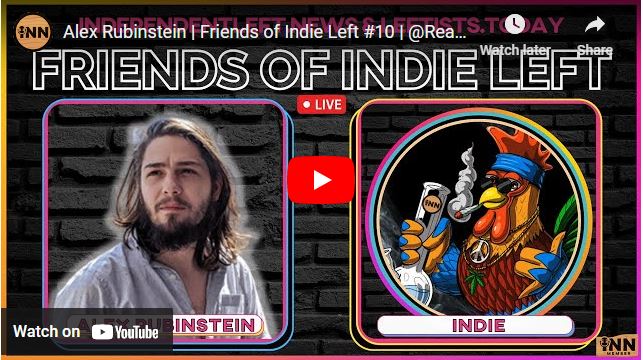 Episode 10 of Friends of Indie Left features an independent journalist who isn’t afraid to question US Government talking points on a variety of topics.

Alex Rubinstein is an independent journalist who has shared live coverage of social movements in the United States including Black Lives Matter, Standing Rock, Charlottesville, the inauguration protests against Pres. Trump, and from inside the besieged Venezuelan Embassy in Washington, DC. He currently lives in Mexico City.

Alex has published a multitude of investigative reports throughout his career. He worked at Russia Today and Sputnik throughout the years-long heights of manufactured anti-Russian hysteria and was among the first reporters to question bogus Russiagate narratives. He has written extensively and broken news about the international effects of neoliberalism and regime change policies of the United States for Mint Press News and The Grayzone. He also co-hosts Pro-Democracy Pod on Rokfin with Mila Ghorayeb.

He’s written in-depth exposes on corruption, worked for “dissident” outlets, regularly attends and films direct action, covers & reports on protests. We’ll learn all about his journey and ask him to share a few stories he may have never told before.

Alex Rubinstein on Covering Palestine-Israel as a Lefty Jew

Alex Rubinstein on Living Under AMLO’s Presidency in Mexico