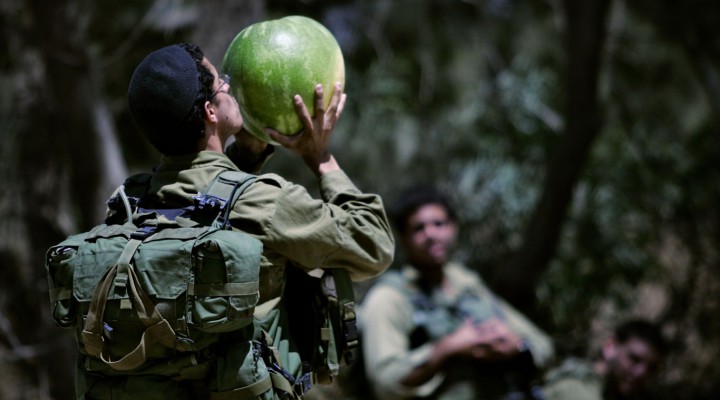 In Israel, a country that cares about animals more than its indigenous human population, you can be vegan, but you can’t support Palestinian rights.

MPN– Most of us are now aware that we constantly receive micro-targeted advertisements in our social media feeds based on our interests, location or habits. Those in the vegan community are no exception. However, an increasing number of promoted posts targeted at vegans on apps like Facebook or Twitter are clearly Israeli Defense Force (IDF) propaganda. Most of these are videos discussing, in English, how accommodating to the plant-based lifestyle the IDF is and how easy it is to be a vegan soldier.

Israel, its government tells us, is a vegan paradise of tolerance and open-mindedness, where its soldiers can serve their country according to their ethical principles, eating vegan food and wearing clothes free from leather, wool, or other animal products. There are now around 10,000 vegan soldiers in the IDF, and that figure is quickly rising. Meanwhile, Tel Aviv markets itself to foreigners as the “vegan capital of the world”.

The perfect place to be vegan doesn’t exi- pic.twitter.com/TxPRExAz4M

But while Israeli society is open to many progressive ideas like veganism and LGBT acceptance, that tolerance does not extend to the Palestinian population inside the country, nor to the 5.5 million refugee descendants of those it forced from the land in 1948. In fact, the United Nations describes Israel as imposing an “apartheid regime” on those Palestinians still living inside its border, who are forced to use inferior roads, schools, deprived of their homes and denied all manner of basic civil and human rights. So while the IDF’s uniforms may be cruelty-free, the injustice they perpetuate certainly is not. Incidentally, the Israeli population is overwhelmingly supportive of such measures, and around 50% advocate for the immediate and complete ethnic cleansing of the remaining Palestinian population, according to a 2016 poll conducted by the Pew Research Center.

There is a fundamental contradiction between veganism and apartheid. Veganism at its core is an ideology of radical compassion for and non-violence towards all sentient beings. As vegan website Live Kindly explains, it means “to live in a way which shows appreciation to our humanity, our home and those who share it with us.” It should go without saying that this is completely incompatible with successive Israeli governments going back to 1948 and Israel’s commitment to being a Jewish supremacist state. Thus, in Israel, a country that cares about animals more than its indigenous human population, you can be vegan, but you can’t support Palestinian rights.

Nevertheless, Israel continues to use the fact that thousands of its soldiers abscond from animal products as proof that it is a forward-thinking, progressive nation. Mainstream and corporate media have, unsurprisingly, parroted this assertion. The BBC, for instance, tells the story of an IDF soldier, Daniella Yoeli, so moral that “had the army not been able to provide conditions that had harmed no living creatures, she might not have enlisted in a combat unit where she would not have been able to provide her own food.” Unexplored in the article was whether or not Palestinian humans qualified as human beings to her.

More alarming, however, is how many vegetarian and vegan outlets have swallowed the bait as well. Veg News reports how Israeli soldiers march to war in leather-free boots and have plentiful plant-based ration options. Live Kindly noted how the IDF’s deputy chief of staff is a vegetarian and how it recently appointed its first vegan officer. Meanwhile, PETA went so far as to advise the Swiss Army to “take a leaf out of the Israel Defense Forces’ book”. But especially troubling is that none of the articles even mentioned any criticism of the IDF, the government, or their actions, effectively amplifying Israeli propaganda worldwide.

With a host of celebrity advocates, including Tobey Maguire, Emily Deschanel and Zac Efron, veganism is growing exponentially across the West. Noting that a quarter of 25-34 year old Americans are vegetarian or stricter, The Economist labeled 2019 the “year of the vegan.” Yet uncritical regurgitation of IDF press releases subtly presents the Middle East region as liberal, forward-thinking Israelis vs. backward, close-minded Arab Muslims.

This framing is particularly misleading for a number of reasons. Firstly, much of the most commonly celebrated Israeli vegan food (falafel, hummus, baba ghanoush, stuffed vine leaves) is simply the appropriated cuisine of the local peoples Israel displaced during its creation. Secondly, the great irony is that the Organization for Economic Co-Operation and Development statistics show that Israelis actually consume the most poultry per capita in the world, with 80% of the population eating it every day. As a whole, Israelis eat over 200 pounds of meat every year, more than even the famously carnivorous Americans.

Furthermore, as the Palestinian Animal League notes, while 3% of Israeli Jews are vegan, the number of their Palestinian Israeli counterparts is twice as high. Therefore, the narrative begins to disintegrate upon even modest inspection.

From Vegan Washing to Pink Washing

In a similar fashion, Israel presents itself as a haven of acceptance for the LGBT community in a region of intolerance. After winning the event in 2018, the country received the right to host the Eurovision Song Contest, a continent-wide celebration of flamboyantly gay music and culture (despite not being a European nation).

The Israeli government saw the country’s victory as a huge diplomatic triumph, with Prime Minister Benjamin Netanyahu declaring winning performer Netta Barzilai as its “best ambassador.” Barzilai flew back home to perform at a government-sponsored victory celebration. The same day the IDF slaughtered at least 58 Palestinians. There was a considerable amount of pushback to the idea of Israel hosting the competition this year, with some acts refusing to perform. Nevertheless, the show went ahead as planned in Tel Aviv, another coup for the government.

While Israel is indeed a land that is both comparatively tolerant of LGBT people and accommodating to vegans, the general progressiveness that implies does not extend to the realm of politics, where the country continues to lurch ever more rightward to the point where even its former Prime Minister, Ehud Barak, has warned that the country is “infected” with fascism and the government must be stopped. Thus, in the Jewish-only state, female bulldozer drivers can destroy Palestinian villages, vegan tank commanders can run over wheelchair-bound children, and transgender pilots can bomb wedding receptions. The trick the IDF is trying to play is to get as much of the world to concentrate on its (limited) liberal inclusivity and ignore its near-genocidal military policy. And it appears to be working.

Feature photo | An Israeli soldier kisses a watermelon before eating it near a Jewish settlement outside the Gaza Strip, May 22, 2008. Dan Balilty | AP

0 thoughts on “Vegan Washing: How Israel Uses Veganism to Gloss Over Palestinian Oppression”