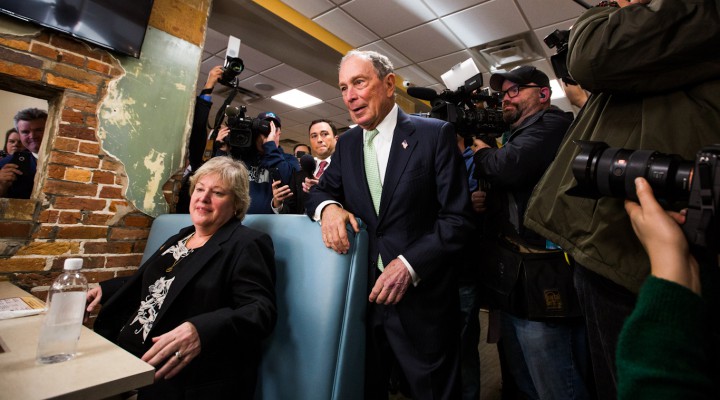 The New Yorker’s presidential bid highlights the contradictions between both extreme wealth and a for-profit, corporate advertiser-driven media landscape and democracy and freedom of expression.

MPN– After months of speculation, former New York City Mayor Michael Bloomberg formally announced a high-profile, big-money campaign to become the Democratic Presidential nominee on November 24. The 77-year-old former Republican has decided that he is the perfect candidate to prevent the president from achieving a second term. Bloomberg has a long history of support for conservative positions, including endorsing George W. Bush’s War on Terror and defending Israel’s 2014 assault on Gaza.

In 2014, Michael Bloomberg went so violently right wing, that the White House's Valerie Jarrett had to stop him and say that Israel's bombing of 500 sleeping Palestinian children was inexcusable. He defended it.

The primary reason why the self-described conservative has the ability to credibly enter the race at such a late date is his financial clout. Bloomberg is the world’s ninth richest individual, enjoying a net worth of nearly $55 billion and he owns a huge eponymous media network, one of the largest in the world.

His recent entry into the ring has proven controversial with many who see the plutocrat’s power and influence as an unfair advantage. Sawyer Hackett, the National Press Secretary for his Democratic nomination opponent Julian Castro noted that if someone had made half a million dollars per day since the United States’ founding in 1776, they would still be far poorer than Bloomberg himself is. Hackett concluded, “that kind of wealth shouldn’t be allowed to leverage success in our primaries.”

Writer and former New York Times columnist Anand Giridharadas pointed out that Bloomberg’s pitch to the American people, that his wealth makes him incorruptible and therefore more trustworthy, was illogical, given that the Democratic Party is currently attempting to impeach a billionaire president on corruption charges, arguing that “being very rich gives you more interests, not less.” It is for this reason that Elizabeth Warren has accused him of trying to essentially “buy the nomination.”

“Someone who can’t be bought.”@MikeBloomberg is running on the idea of the ultra-rich being especially incorruptible — at the moment we are impeaching a rich president, who said he’d be incorruptible, for corruption. Turns out being very rich gives you more interests, not less. https://t.co/mKPHYhKLSi

Yet Bloomberg’s run for President highlights another danger: that of freedom of the press. As the New Republic warned, the 2,700 journalists working directly under him in his extensive media network are in an impossible position. Can they truly report fairly and in an unbiased manner on the presidential race when their owner has such an obvious and important stake in its proceedings? If history is any judge, the answer to that will be “no.” Silvio Berlusconi, for instance, used his vast media empire to propel him and keep him in power as the Prime Minister of Italy for nine years.

Bloomberg Editor in Chief John Micklethwait announced a series of top-down measures attempting to head off this problem, instructing the company to simply not cover their boss or any of the other candidates in the Democratic primaries. How a major news outlet is going to ignore such an important ongoing process was not explained.

Yet the company appears to already be breaking this promise. The organization ran three negative stories on Elizabeth Warren in a 24-hour period earlier this week. Was this as a response to her criticism of his actions or an attempt to undermine one of the most popular rival candidates’ chances? That is a question that arises uniquely in a situation where a politician owns the means of communication.

Bloomberg the billionaire has muddied the waters between his political interests and his media empire even further by hiring David Shipley and Tim O’Brien, Executive Editors from his news outlet, to key positions in his presidential campaign.

Yet another important danger to media freedom is the fact that Bloomberg is promising to lavish enormous amounts of money to corporate media outlets in the form of political advertising. Even before he had officially announced his candidacy, he already spent $33 million in television advertising alone, beaming his message nationally and in 98 local markets. With the prospect of a bonanza of a seemingly bottomless pile of advertising money, will corporate media outlets, under intense financial pressure, be influenced in their coverage of the billionaire’s activities? There is always a quid pro quo when one accepts funding from any powerful person or organization.

The billionaire already has a list of ringing media endorsements from some of America’s most influential media figures. The New York Times’ Thomas Friedman claimed as President he would “forcefully put a Democratic pro-growth, pro-innovation, pro-business agenda on the table” in a column entitled “Why I like Mike.” His colleague Bret Stephens cheered him on. His article “Run, Mike Run!” argued that the wonderful thing in choosing a conservative Republican as Democratic candidate was that all the usual Republican talking points about the Democrats being too liberal would not work on Bloomberg. Meanwhile, one New York Post commentator said he was “delighted” that the plutocrat was “saving the party” from out-of-touch socialists like Warren.

Can we be sure that these are genuine expressions of support, or merely a calculated quid pro quo? This is again a question that only arises in a corporate, advertiser-dominated media ecosystem. Corporate media have every reason to prop up the multi-billionaire’s campaign, keeping him in the race as long as possible, knowing that the money will continue to flow, as long as they do not portray him poorly. (Rest assured that MintPress News has not been approached to carry water for his campaign).

The New Yorker’s presidential bid highlights the contradictions between both extreme wealth and a for-profit, corporate advertiser-driven media landscape and democracy and freedom of expression. Any expansion of democracy and solution to these dilemmas requires seriously questioning whether either of the first two are legitimate. As Bernie Sanders said, “Billionaires shouldn’t exist.”