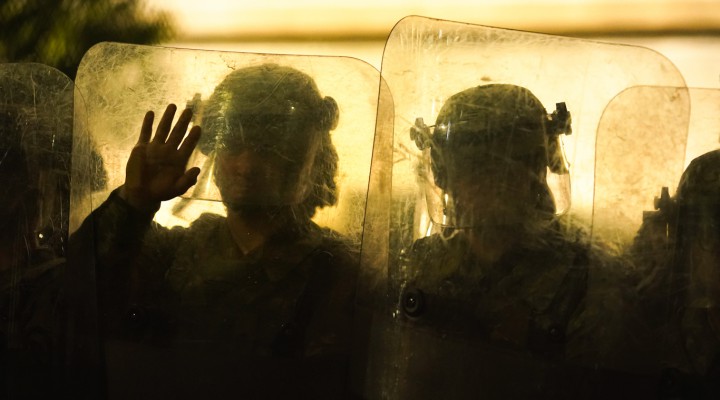 In 2018, Sheriff David Beth went on a bizarre eugenics rant, claiming that the police’s job should be to stop “these males” from “getting ten other women pregnant and having small children,” among other troubling comments he made on video.

MPN– The Kenosha Police Department has come under heavy scrutiny in recent days after one of its officers shot Jacob Blake multiple times in the back at close range. Later, after protests erupted, its officers stood shoulder-to-shoulder with local militia, one of whom — a 17-year-old boy — would go on to shoot three people, returning to police lines, where they did not arrest him, allowing him to continue unabated.

The American Civil Liberties Union (ACLU) has called for the resignation of the city’s police chief, Daniel Miskinis, and the county’s sheriff, David Beth. “Sheriff David Beth’s deputies not only fraternized with white supremacist counter-protesters on Tuesday, but allowed the shooter to leave as people yelled that he was the shooter,” they wrote in their statement. The ACLU also drew attention to an obscene rant Beth went on in 2018, in reaction to a shoplifting incident.

“I’m to the point where I think society has to come to a threshold where there are some people that aren’t worth saving,” Beth said, from his podium, in front of the press. “We need to build warehouses to put these people into it and lock them away for the rest of their lives,” with “no recreational time” whatsoever, he added. This was in response to the arrest of five black people for shoplifting. He then went on a bizarre eugenics rant, claiming that the police’s job should be to stop “these males” from “getting ten other women pregnant and having small children.” “Let’s put them away,” he said, “at some point, we have to stop being politically correct.” Beth attempted to justify his opinion, stating that the five black suspects, “drove through a red light, they stole thousands of dollars worth of clothing, and they don’t care.”

The ACLU also condemned Miskinis for his response to the Blake shooting and subsequent murders, noting that he blamed the unidentified victims in Tuesday night’s shooting for their own deaths, saying they should not have broken curfew. “Their actions uphold and defend white supremacy, while demonizing people who were murdered for exercising their First Amendment rights and speaking out against police violence,” said Chris Ott, Executive Director of the ACLU of Wisconsin. “The only way to rectify these actions is for both Sheriff Beth and Police Chief Daniel Miskinis to immediately tender their resignations.”

On Sunday afternoon, Kenosha police officer Rusten Sheske shot Jacob Blake, a local 29-year-old black multiple times in the back from point blank range. While Blake was left paralyzed and fighting for his life, video of the incident was going viral, sparking nationwide protests. Sheskey was placed on administrative leave, little more than paid vacation in some commentators’ eyes. Officers claim that Blake had a knife on his person. Protests engulfed Keshona, with Governor Tony Evers declaring a state of emergency. Right-wing militias also converged on the small Wisconsin city. Among them was 17-year-old Kyle Rittenhouse, who got his mother to drive him across state lines with an illegal firearm. Rittenhouse was filmed shooting three people, killing two, before rushing back to police lines, where he was protected from the protestors. Despite killing two people in front of dozens of police officers, he was not arrested until the next day. Indeed, video emerged showing police fraternizing with the militias before the shooting, telling Rittenhouse and his crew that “we appreciate you guys, we really do,” just before the shootings.

The overlap between law enforcement and racist militias has been well studied. Far-right groups are infiltrating police departments nationwide, something the government has known about and monitored for years. Facing a recruitment crisis, the military has also been recruiting Neo-Nazis to join its ranks. During the racial justice protests occurring nationwide throughout the summer, police have been caught coordinating with far-right groups and making white power gestures.

Trying to gauge the exact level of crossover between police and the far-right is not easy, although a recent study by the group Injustice Watch makes for worrying reading. The study found that 20 percent of police officers post openly racist content or share content glorifying police violence against protesters on their public Facebook pages. This figure rises to 40 percent of retired cops. And the two most common professions of readers of right-wing conspiracy website InfoWars are police officer and soldier. Thus, while Sheriff Beth’s remarks might shock the public, those who closely follow the issue are likely less surprised.