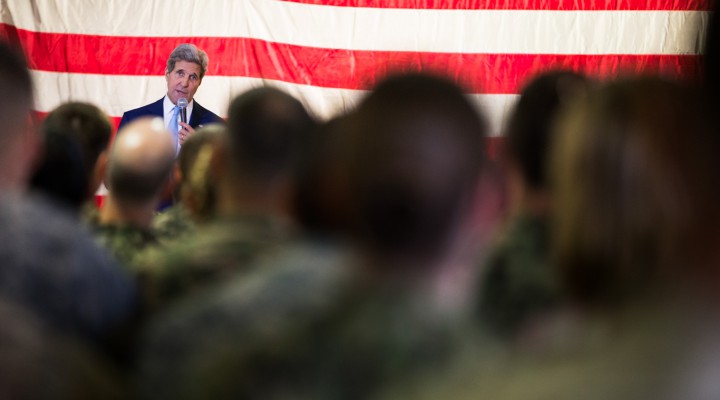 “America will soon have a government that treats the climate crisis as the urgent national security threat it is.” — John Kerry

MPN– Recently-appointed Special Presidential Envoy for Climate John Kerry has announced his intention of dealing with the pressing issue of global warming as a national security concern. “America will soon have a government that treats the climate crisis as the urgent national security threat it is,” the 76-year-old former Secretary of State wrote. “I am proud to partner with the President-elect, our allies, and the young leaders of the climate movement to take on this crisis.”

The announcement drew praise from many professional climate activists and groups, perhaps assuming that Kerry was taking his lead from Bernie Sanders, who has for years been saying the same thing. Executive Director of the Sunrise Movement, Varshini Prakash said his statement was an “encouraging move,” while 350.org’s Bill McKibben, predicted Kerry would be an excellent climate czar. Yet, as media critic Adam Johnson argued, Kerry’s proclamation should deeply concern progressive activists and will likely lead to expanding the already bloated military budget.

Kerry is a founding member of the Washington think tank, the American Security Project (ASP), whose board is a who’s who of retired generals, admirals and senators. The ASP also hailed the appointment of their man, explaining, in a little-read report, exactly what treating the climate as a national security threat entails. And it is nothing like what Sanders advocates.

For the ASP, climate change constitutes an “accelerant of instability” and a “threat multiplier” that will “affect the operating environment,” and notes that Kerry will have three priorities in his role as President Biden’s right-hand man. What were those three priorities? Making sure people in the Global South could eat and have access to safe drinking water? Reparations? Disaster relief or response teams? Cutting back on fossil fuel use? Indeed not. For the ASP, the primary objectives were:

The ASP notes that rising sea levels will neutralize or destroy dozens of American naval bases around the world, including the world’s largest such base in Norfolk, VA. The ASP recommends “prioritizing the measures that can protect readiness” of the military to strike at any time, also warning that rising sea levels will hurt the combat readiness of the Marine Expeditionary Force. Thus, a rebuilding of the U.S.’ worldwide network of military bases is in order. The report notes that the nations most immediately affected by climate change are South Pacific island chains like Vanuatu or the Marshall Islands, claiming that these countries are “strategically important in the contest between the U.S. and China.” It recommends that the U.S. must use all tools available to remain in control of those islands, claiming that China is “showering cash” on them, building seawalls, ports, and clean energy stations that are a threat to U.S. dominance of the region.

The ASP also notes that the Arctic is the fastest-warming area of the world, and envisions a pitched battle with Russia to control the area, which is increasingly open to maritime traffic thanks to melting arctic ice. “NATO faces a severe military challenge in the European Arctic area of operation,” it writes, advocating that, “the U.S. military should actively participate in Arctic joint exercises, and publicize U.S. military deployments to the region, with particular focus on the Russian border – perhaps by returning the U.S. Marine deployment to Norway.” “There is no time to waste,” it concludes, insisting that, “the region needs a concerted diplomatic, security, and economic push from the U.S. government.”

What will the designation of the climate crisis as a “national security threat” entail domestically? Last year, the ASP wrote that “Given that climate change will force more families to migrate, funding for border security should include improving facilities for holding and transporting migrants.” In other words, an expansion of the militarized border and network of detention centers, often condemned as “concentration camps.”

Michelle Flournoy, tipped by many for a top job in Biden’s team, also argued that the military as part of the solution to climate change, suggesting it could be turned into a force for environmentalism. Yet there is little chance of this happening. The Pentagon is the largest single polluter in the world, and the U.S. has historically insisted on exempting the military from any climate treaties. Just one B-52 bomber consumes as much fuel in an hour as an average car driver uses in seven years. As the Institute for Policy Studies wrote, “militarism and climate justice are fundamentally at odds” while “climate change and border militarization are inextricably linked.”

While many activists may have taken heart at Kerry’s tough words, it is doubtful whether occupying Norway or expanding the network of ICE camps was exactly what they had in mind when they said they wanted the government to act on climate change.

Feature photo | U.S. Secretary of State John Kerry speaks to troops at America’s only base in Africa, Camp Lemmonier in Djibouti, Djibouti, May 6, 2015. Andrew Harnik | Pool via AP