HOME / SOCIAL/CULTURAL / “Here Are the Superheroes To Come and Save Us”: Media Waste No Time Fawning Over Biden 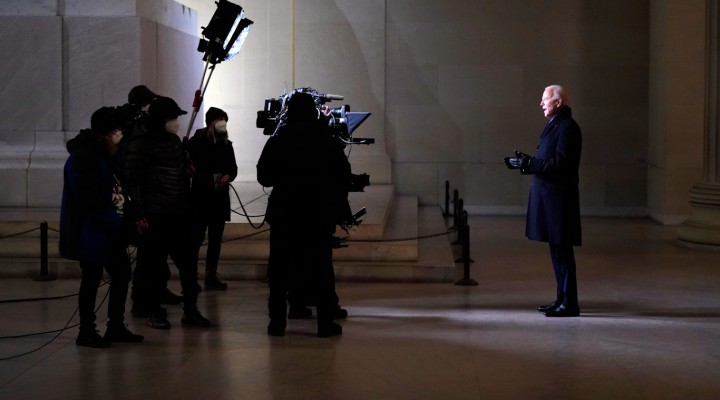 The same media that behaved as attack dogs against Trump for four years (unless he was carrying out aggressive actions abroad) are likely to turn into lap dogs now that there is a Democrat in the White House.

MPN- We rely on the media to hold the powerful to account. But in its first hours in office, the corporate press has celebrated, rather than challenged, the new Biden administration.

It began immediately during the 78-year-old Delawarean’s inauguration, with senior figures in the media barely able to contain their emotions watching what they saw. “As Lady Gaga sang the national anthem, the sky opened up and sunlight reflected off of the Capitol, illuminating the flag,” wrote Olivia Nuzzi, the New Yorker’s Washington correspondent. The New York Times was in a similarly poetic mood. “Whether or not related to the former president’s absence, a bipartisan lightness seemed to prevail across the stage at President Joe Biden’s inauguration. Snow flurries gave way to sun,” ran its subheadline.

If it were not clear enough that corporate media intends to spend the next four years propping up, rather than scrutinizing President Biden, then senior CNN figures spelled it out.

“Trump—>Biden. Lies—>truth. Ignorance—>knowledge. Amorality—>decency. Cruelty—> empathy. Corruption—>public service” wrote CNN’s White House correspondent John J. Harwood on Twitter, attributing several extremely positive (and questionable) qualities to the incoming president. Meanwhile, the company’s head of strategic communications, Matt Dornic, was in an even more bombastic mood. Sharing a picture of fireworks exploding over the Washington Monument, he remarked that, “This team truly understands optics. These images will inspire our friends and shake our foes.”

Leaving aside why some colorful pyrotechnics would terrify Russia, China or any nation, Dornic’s rhetoric worried many who felt the nation’s top journalists should see themselves as the government’s adversaries, rather than their allies. “Note how this CNN imperial stenographer fearmongers about foreign bogeymen with his “foe” rhetoric. The real foe of average working-class Americans isn’t any foreign nation; it’s the parasitic capitalist oligarchs who control everything and their lackeys in politics and the media,” replied Ben Norton of The Grayzone.

This team truly understands optics. These images will inspire our friends and shake our foes. pic.twitter.com/8i6qjUiJC5

Channeling similar energy to a born again Christian preacher praising Trump, former Fox News and NBC News host Megyn Kelly announced that, “Today, I feel deep love for our country, and am praying for President Biden, Vice President Harris and for all of us as we navigate what comes next.”

Perhaps the most adulatory coverage of the inauguration came from MSNBC, however, with analyst John Heilemann depicting the senior politicians present as almost mythical ubermensch. “What was to me so striking about today was that comforting sense,” he said. “The sight of the Clintons and the Bushes and the Obamas — The Avengers, the Marvel superheroes back up there together all in one place with their friend Joe Biden.” He later went on to compare Biden’s speech to Abraham Lincoln’s second inaugural address of 1865 after the union victory in the American Civil War and claimed there was a deep sense of relief washing over the nation’s capital..

PBS's @Yamiche: Biden's cabinet picks was like "The Avengers" —

"It felt like we are being rescued from the craziness and now here are the superheroes to come and save us all." pic.twitter.com/QLKlPG6RQt

This sentiment was apparently not shared by ordinary people on the street. Even as it was praising Biden, the New York Times reported that “The few who ventured near the Capitol were mostly somber, as if they were attending a vigil.” “It feels a little postapocalyptic, to be honest,” one told them.

Comparing politicians they are, in theory, supposed to be challenging to superheroes has unfortunately become a common occurrence on corporate media. In November, PBS NewsHour White House correspondent Yamiche Alcindor said Biden and co. were like The Avengers. “It felt like we are being rescued from the craziness and now here are the superheroes to come and save us all.”

Today on MSNBC, Alcindor insisted that she and her White House press colleagues would “ask tough questions” of Biden even as she was heaping praise on his administration. Yet this has already proven not to be the case. On her first day as White House press secretary, Jen Psaki was thrown a number of softball questions by reporters, including whether Biden was planning to stick with Trump’s color scheme change on Air Force One.

Despite What You Heard, There Was No Peaceful Transition

Trust in media has been falling since the 1970s, and particularly in the last few years. Part of that is due to ultra partisan reporting, a practice pioneered by Fox News in the 1990s. What Rupert Murdoch realized was that capturing a loyal following from a small segment of the population could actually be more profitable than trying to appeal to as broad an audience as possible. Since then, Fox’s model has been copied by other outlets, notably MSNBC, the New York Times, and the Washington Post, who have positioned themselves as anti-Trump and pro-Democrat news sources. The result has been to create an extremely polarized media ecosystem, with each side championing their leaders and not willing to listen to the other. Unsurprisingly, Fox has been highly critical of the new president, with top host Sean Hannity attacking Biden, claiming he is physically and mentally unfit for office. “The country should be asking tonight, Mr. Unity, Mr. Frail, Weak, Cognitively Struggling Joe, I know this is past your bedtime,” he opined.

This has seriously deleterious effects on the political system. An adversarial media is the cornerstone of any functioning democracy. Thomas Jefferson once remarked that “Were it left to me to decide whether we should have a government without newspapers, or newspapers without a government … I should not hesitate a moment to prefer the latter.” Unfortunately, if Biden’s first few days are any indicator, the press will choose to prop up rather than scrutinize the new president. Media that behaved as attack dogs against Trump for four years (unless he was carrying out aggressive actions abroad) are likely to turn into lap dogs now that there is a Democrat in the White House — something that is unlikely to be a positive thing for the country.

Feature photo | President Joe Biden speaks to the media at the Lincoln Memorial in Washington, Jan. 20, 2021, after his inauguration. Joshua Roberts | Pool photo via AP

0 thoughts on ““Here Are the Superheroes To Come and Save Us”: Media Waste No Time Fawning Over Biden”