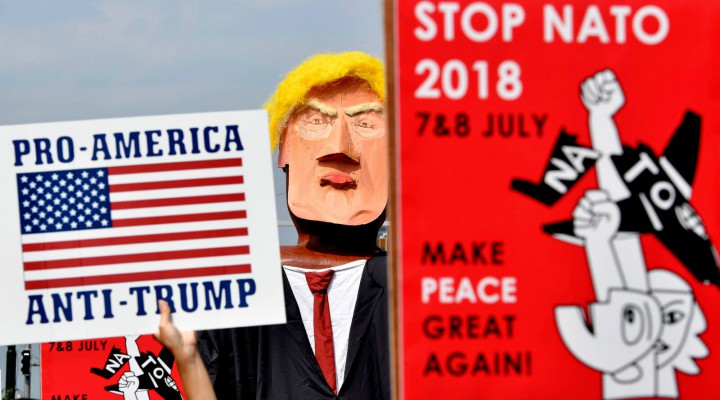 Like a snake shedding its skin, NATO is attempting to rebrand itself in an effort to remain of service to empire, greatly expanding its remit as it did after the fall of the Soviet Union.

MPN– The North Atlantic Treaty Organization (NATO) is currently meeting in Washington to celebrate the military alliance’s 70th birthday. But the occasion is far from festive. This week NATO officials identified China, not Russia, as their number one adversary, signaling a new military buildup against the world’s most populous nation. “China is set to become the subject of the 21st century on both sides of the Atlantic,” German Foreign Minister Heiko Maas stated.

The shift in attention to China is a continuation of established U.S. foreign policy. In 2011 President Barack Obama announced an American “pivot to Asia,” entailing the deployment of nearly two-thirds of U.S. naval forces to the region by 2020 and a military buildup that now sees over 400 American military bases — from the Middle East and Afghanistan, to Australia, Guam and Japan — encircling China.

Late last year Vice-President Mike Pence condemned China for its “empire and aggression” in the South China Sea, a comment those familiar with decoding Orwellian political-speak will be alarmed by. More ominously, President Donald Trump has demanded that European NATO members “pull their own weight” inside the organization, a phrase that implies a new arms buildup. It had been reported that Trump was considering withdrawing from NATO. However, it appears from this week’s summit that the possibility has receded as the mercurial president has turned his attention to other matters.

NATO was officially founded on April 4, 1949, and was originally a collective of 12 North American and Western European states. By 1989 it had expanded somewhat to include Greece, Turkey, West Germany and Spain. Its stated purpose was to counter the possibility of a Soviet invasion of Europe.

The USSR dissolved in 1991, meaning there was no longer any Soviet threat. However, far from disbanding, NATO began to expand drastically, both in its size and scope. This was in complete contrast to what Western officials had promised Soviet leader Mikhail Gorbachev. Secretary of State James Baker had told him that, if the USSR permitted German reunification, NATO would not expand even “one inch to the east.”

Ignoring American promises, NATO has ballooned in size to 29 official member states today, including former Soviet republics Estonia, Latvia and Lithuania. The combined military spending of the organization’s members constitutes around 70 percent of the global total, according to the Stockholm Institute for Peace Research Initiative. However, it is the United States that is by far the dominant partner, spending around as much on war as every other country in the world combined. Trump has also recently floated the possibility of inviting Colombia and Brazil to become member state s as well, officially moving the organization into the global south.

From guard dog to attack dog

In 1999, NATO bombed Russian ally Yugoslavia and carved out a piece of it to form a new country, Kosovo — a state Russia, China, and around half of the world’s nations do not recognize. Since then, the organization has been at the forefront of destabilizing the world through military interventions. In 2001 it attacked and occupied Afghanistan, leading to the country’s devastation and a war ongoing to this day.

The most bellicose NATO members — the U.S. and U.K. — led an invasion and occupation of Iraq in 2003 based on phony evidence, which resulted in around one million killed and millions more displaced. NATO was formally involved in the occupation by 2004. In 2011 it began bombing Libya, greatly exacerbating a violent civil war that led to the overthrow and extra-judicial execution of Colonel Muammar Gaddafi and the fall of the most advanced African nation into the hands of jihadists, who now preside over a failed state replete with slave markets. NATO members like the U.S., U.K., France and the Netherlands have also played key roles in supporting various armed groups in the Syrian Civil War, extending and aggravating the bitter conflict by supporting groups euphemistically described as “moderate rebels” in our press. Any pretense of the organization being a purely defensive one is well and truly over.

The cause of the refugee crisis starts at home

The Mediterranean and Middle East region is beset by a full-blown refugee crisis. This crisis has become a major political issue in Europe and across the world. However, politicians and the media rarely discuss the link between large numbers of displaced people and the West’s wars in precisely those countries. The top three countries of origin of asylum seekers in the EU since 2014 are Syria, Iraq and Afghanistan. Indeed, between 2014 and 2017 nearly one million Syrians alone applied for asylum in EU member states. In contrast, there is no mass exodus from states such as Iran or Lebanon that NATO has not invaded. In fact Iran hosts around 1 million refugees and Lebanon, a state smaller than Connecticut, holds 1.4 million.

NATO members, particularly the U.S. and U.K., bear prime responsibility for the destruction of the entire region, leading to a humanitarian crisis of epic proportions. But instead of taking on the responsibility of housing the victims of their wars, political capital has been made of presenting refugees and migrants as a threat that must be stopped. One columnist in Britain’s best-selling newspaper described them as “cockroaches.” Meanwhile, President Trump is continually planting the idea that refugees from Central America are rapists, terrorists or other criminals.

From conventional to cyber warfare

Talk at NATO’s 70th-anniversary meeting is centering on new theaters of confrontation, particularly information warfare. Secretary of State Mike Pompeo called on the organization to “adapt” to a new digital era and move into cyber warfare. Likewise, the former supreme allied commander of NATO, James Stavridis, declared that in 10 years NATO would be “far more engaged in… cyber security” and would have far greater “offensive cyber capability.”

This is a worrying omen for those concerned with freedom of speech and of the media online. NATO’s offshoot, the Atlantic Council, is already partnering with Facebook to help the social media giant differentiate between what is “trustworthy” and what is “fake news,” promoting the former while deleting the latter. Forty-five percent of Americans get their news from Facebook, with similar numbers in other countries as well. When an organization headed by Henry Kissinger, Condoleezza Rice, Colin Powell and ex-CIA directors like Leon Panetta and Michael Hayden is deciding what Americans (and the world) sees and does not see on their feeds, it is tantamount to state censorship.

Changes to Facebook’s algorithm have greatly reduced traffic to progressive and alternative media outlets, such as Common Dreams and MintPress News. This is one reason why, more than ever, alternative media must be supported. The social-media giant has also deleted pages owned by NATO enemies, such as media connected with the Iranian and Venezuelan governments. In contrast, it works closely with the Israeli government to agree on what Palestinian voices it should censor. An Intercept report found that Facebook complied with 95 percent of Israeli requests.

There appears, however, to be increasing public disillusionment with the organization. A YouGov survey of six key NATO member states (including the U.S.) published this week found that support for the organization was falling, leading to a rising public ambivalence towards it. Fewer than 50 percent of Americans responded that they supported their country’s membership in NATO, as did fewer than 40 percent of French respondents. This ambivalence, however, has not transformed into active opposition, and it is not known whether this is simply part of a trend of growing popular mistrust of public organizations, such as the government or the media.

As NATO reaches its 70th birthday, a growing number of commentators have pondered its uncertain future. “If NATO didn’t exist, would we invent it? I suspect not,” asked MIT political scientist Barry Posen, who called for a re-evaluation of the US role in the organization last month in the New York Times. Perhaps the organization has finally reached its retirement age, given its less-than-exemplary track record of destruction around the world. However, like a snake shedding its skin, NATO is attempting to rebrand itself in an effort to remain of service to empire, greatly expanding its remit as it did after the fall of the Soviet Union. If NATO is to depart the stage, it will likely be because of public pushback against war rather than as a result of the unpredictable decisions of Donald Trump. When all you have is a hammer, everything begins to look like a nail. The longer it continues the more wars and destruction NATO will cause.

0 thoughts on “As Increasingly Unpopular NATO Turns 70, Has the Organization Reached its Retirement Age?”