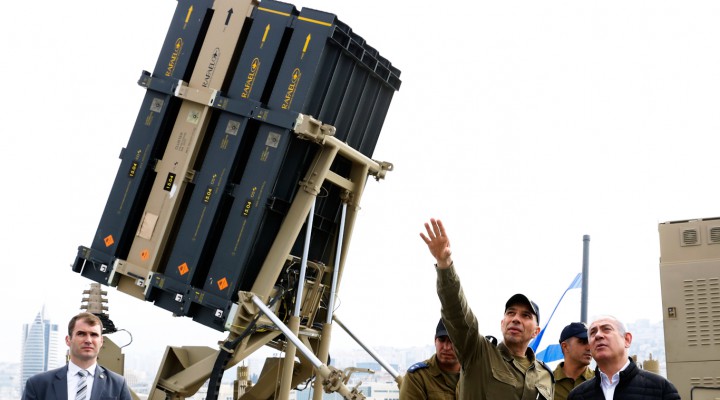 US Secretary of Defense Mark Esper, a former lobbyist for Raytheon, may soon step in to reverse the decision following pressure from Israel, given that Raytheon co-develops the system with Israeli firms.

MPN– After spending $373 million to buy two batteries of the Israeli-made Iron Dome missile defense system, the U.S. Army has announced that it is unable to integrate the batteries it purchased with its other air defense systems because Israel has refused to provide the Army with the source code. The Army asserted that without the source code, the system could not be integrated without causing grave cybersecurity vulnerabilities. As a result, the Army has now scrapped its plans to purchase an additional $600 million worth of Iron Dome components.

Adding insult to injury is the fact that the Iron Dome system itself was largely financed by U.S. taxpayers after Congress authorized over $1.5 billion in taxpayer funds to be used by Israel for the development and production of the Iron Dome system, which has suffered from a series of embarrassing failures since it entered the market.

It remains to be seen if the other countries that have signed deals with Israel to purchase Iron Dome, including Azerbaijan and India, will take notice of the U.S. Army’s decision and similarly scrap those plans given Israel’s apparent refusal to provide the source code to even its closest military ally following purchase.

News of the Army’s decision was made public last Thursday when Gen. Mike Murray, commander of Army Futures Command, spoke to the House Armed Services Tactical Air and Land Forces Subcommittee. “We believe we cannot integrate them into our air-defense system based upon some interoperability challenges, some cyber[security] challenges and some other challenges. So what we ended up having is two stand-alone batteries that will be very capable, but they cannot be integrated,” Murray told the subcommittee. Secretary of Defense under Obama and Ehud Barak deliver statements during a visit to an Iron Dome battery in Ashkelon, Israel, Aug. 1, 2012. Tsafrir Abayov | AP

Murray further stated that it would prove “exceptionally difficult to integrate Iron Dome into our layered air-defense architecture [and] to get Iron Dome to talk to other systems [and] other radars, specifically the Sentinel radar.” “What you’re probably – almost certainly – going to see is two stand-alone systems. And if the best we can do is stand-alone systems, we do not want to buy another two batteries,” Murray added.

If future international purchases of Iron Dome are to be impacted by the U.S. Army’s decision, it will not only be a setback for Israel’s defense industry, but also that of the United States, given that U.S. weapons manufacturer Raytheon produces some of the system’s components and markets the systems within the United States. Notably, current U.S. Secretary of Defense Mark Esper is a former lobbyist for Raytheon, a company that closely collaborates with Israel’s defense industry on other systems as well, such as “David’s Sling.”

Esper’s history may be a factor in a potential reversal of the Army’s recent decision, which was urged by Israel’s Defense Ministry following Gen. Murray’s statements before Congress. Israel’s Defense Ministry asked the Army to reconsider their decision to halt future purchases and overlook the existing cybersecurity hurdles in integrating those already purchased “as it would express confidence and recognition of the system’s ‘exceptional capabilities’ and the quality of Israel’s defense industries,” the Jerusalem Post reported.

Israel’s decision to not reveal the source code of a system the U.S. helped finance and subsequently purchased is striking, particularly given that their refusal to do so has resulted in the loss of considerable revenue and the potential collapse of future international sales of the system. Israel’s history of using backdoors in software for intelligence and military purposes, including at sensitive U.S. government facilities, raise obvious concerns about the motive for such a decision.

Yet, while the U.S. Army has raised cybersecurity concerns about the lack of transparency regarding Iron Dome’s source code, the same company that creates Iron Dome’s software has its software running on critical infrastructure systems throughout the United States. Indeed, Iron Dome’s software was created by mPrest, whose largest stakeholder is Israeli weapons manufacturer Rafael Advanced Defense Systems, which in turn is a state-owned company. Rafael is also the principal developer of the Iron Dome system.

In just the past few years, mPrest has become a major provider of software to U.S. utility companies across the country — from California to New York — and has also entered the European and Australian markets. It remains to be seen if the scrutiny over mPrest’s code for the Iron Dome system and the motives behind it will lead to scrutiny of the software that is being used at critical points of the U.S. power grid, particularly at a time when government officials and private companies (including Israeli-American cybersecurity company Cybereason) are warning that “foreign actors” are targeting the U.S. power grid with malicious intent.