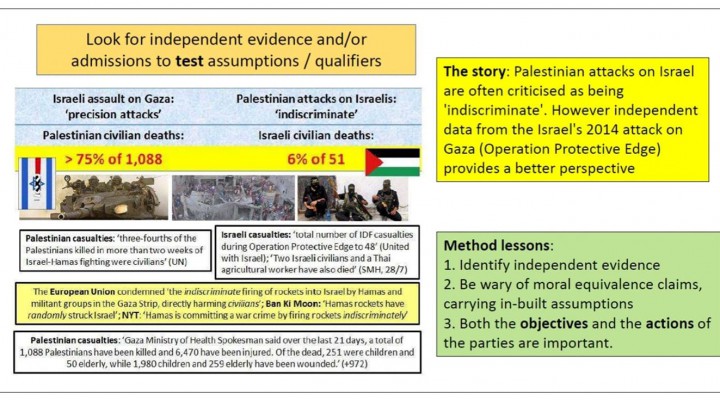 Quite a number of people have asked me what is happening with the review of my ‘suspension pending expulsion’ from the University of Sydney, following managers’ attempts to censor some of my public comments.

I give an update here, along with the discussion of one matter that emerged in discussion with Provost Stephen Garton, at the Review Committee yesterday. That concerns the management attempt to advance reactionary politics under the guise of ethics. My infographic on ‘Gaza casualties’ (above) helps illustrate this point.

The Review Committee is an internal university process, with a panel of three comprising one management representative, a staff representative and an independent chair. Yesterday they heard from me and Stephen Garton. They will deliver a report to university management within 2 weeks. If the report goes against Stephen’s demand to dismiss me from my position, the report will be sent to Vice Chancellor, Michael Spence. Managers are not obliged to adopt the committee’s recommendations but they usually do. The report will be public and management may look bad if they reject the results of their own process. At the same time, because it is their own process, I do not expect a report that will be fiercely critical of management. Actually, I have no idea how the committee will report. If this process does not resolve the matter, I do have some legal options.

Lobbyist incited attacks on me began back in January 2014, as a result of my writing and campaigning against the dirty war on Syria. These attacks were led by the Murdoch media, which resumed attacks at the time of (and to assist) Donald Trump’s April 2017 missile attacks on Syria. Recall that fake chemical weapons pretexts were used back then. See my most recent article on this:‘WMD take two: chemical weapons claims in Syria’.

In 2018 the chief lobbyists against me were Channel Seven (like the Murdoch media, deeply invested in Israel and supporting every single US intervention and war in the Middle East) and several public and private friends of Israel. The Zionist lobby has always conscripted a few parliamentarians to join in, especially those who have traveled to Israel on their regular junkets.

I became aware that several other academics in Australia (Jake Lynch; Sandra Nasr; Scott Poynting) and in the USA (Angela Davis; Marc Lamont Hill; Rabab Abdulhadi) were also under attack from Zionist lobbyists. Our criticisms of Israel, and support for the Palestinian people, is always said to be ‘anti-semitic’. That influences some feeble minded people.

My Review Committee was not interested in the activity of lobbyists, just the actions of the managers and their allegations against me. I rejected all the allegations, over 2017-2018. Most in 2017 were to do with my alleged ‘inappropriate’ criticism of journalists for their war disinformation; then I was attacked in 2018 for some perceived insults to Israel, buried in the background of two social media posts.

My defense was based on intellectual freedom grounds (not to be censured unless there is ‘harassment or intimidation’), that management used wrong standards for intervention (saying simply they considered some comments ‘inappropriate’ or ‘offensive’) and that an asymmetric media war was carried out, with managers, on the one hand, demanding secrecy from me and on the other issuing media releases against me and a colleague.

Much of the hearing involved a discussion with Stephen Garton, who had made the findings of ‘misconduct’ against me in 2017 and 2018. He appeared as the sole ‘witness’, but the proceedings were much less formal than those of a court.

Stephen’s responses over my ‘Gaza casualties’ graphic (which I use in my teaching materials) revealed our different assumptions about history and pedagogy, but also his political values in viewing the Gaza casualties graphic as both ‘offensive’ and sanctionable.

I had criticized him for focusing on a distorted Israeli flag in the background, and ignoring what the graphic was really about, i.e. (1) an analysis of civilian casualties and (2) how to identify independent and biased (self-serving) sources of evidence. That second part forms part of a series of teaching slides on ‘how to read controversies’. Stephen was only interested in what seemed (at high magnification) to be a Nazi flag superimposed on part of the Israeli flag. This was not even visible, at normal magnification. Whatever that might mean, a wider question arose.

Stephen said he felt the fact that the Palestine flag was presented correctly, while the Israeli flag was altered and placed vertically, showed an ‘imbalance’ or a lack of ‘even-handedness’. He commented that my unit of study ‘Human Rights in Development’ seemed a “good course”, but that the graphic “undermined the credibility” of my teaching. He added that the imagery of an altered Israeli flag was “not necessary”. I asked him if he was talking about even-handedness in relation to apartheid Israel? He responded along these lines: “Well you can produce studies saying Israel is an apartheid state but I can produce just as many saying it is not”.

I told the committee that I see the matter differently. My course ‘Human Rights in Development’ begins by looking at imperialism and self-determination, and the history leading up to the twin human rights covenants of the 1960s. Both begin with the right of peoples to self-determination. That is a right placed in international law by the formerly colonized peoples, as a reaction to and rejection of imperialism and colonization. As a result, no educational process in the 21st century should have to regard colonial regimes as ‘morally equivalent’ to anti-colonial movements.

Israel’s several dozen racially discriminatory laws, its occupation, and theft of Syrian, Lebanese and Palestinian land, its racial ideology and its denial of equal citizenship to Palestinians all give it the character of a colony and, in recent years, that of an apartheid state. Under international law an apartheid state is a crime against humanity and the international community has a responsibility to see it dismantled. This is not me saying this, this is a series of UN statements and reports. See my 2018 essay ‘The Future of Palestine’. See also the excellent report prepared for the UN in 2017 by Richard Falk and Virginia Tilley, ‘Israeli practices towards the Palestinian people and the question of apartheid’.

When it came to my text, Stephen cited one of my comments (“How to read the colonial media, and untangle false claims of ‘moral equivalence’. The colonial violence of Apartheid Israel neither morally not proportionately equates with the resistance of Palestine”) and my research article (‘The Future of Palestine’) as part of his ‘allegations’ of 26 October 2018.

Even though my comment specifically disavowed moral equivalence for colonial regimes, and the research article discusses parallels between the racial ideologies of Nazi Germany and Israel, he did not object to them. He accepted that context was always important but relied on a fragment of imagery which he claimed was ‘not necessary’.

What was he doing here? He refused to engage with my textual arguments but attacked an associated image, ostensibly because it was not fully explained.

I concluded that Stephen’s insistence that my ‘Gaza casualties’ graphic was both ‘offensive’ and sanctionable came from his reactionary and outdated political views. He was attempting to elevate reactionary politics to ‘ethics’. I say that is illegitimate.