HOME / WORLD / How Turkey Lost A Battle Of Wills, And Force, To Russia 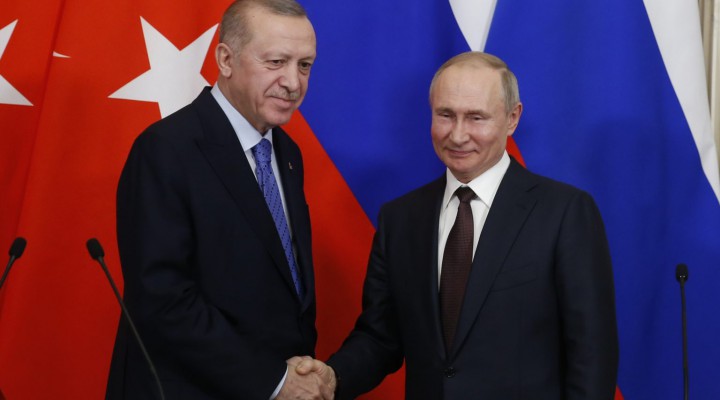 Erdogan talked tough, but in the end had to surrender gains to Moscow and Damascus.

When the history of the Syrian conflict is written, the fighting that took place between the Syrian Army and its allies on the one side, and the Turkish military and Turkish-backed Syrian rebels on the other, from early February through early March 2020 in and around the Syrian town of Saraqib, will go down as one of the decisive encounters of that war.

Representing more than a clash of arms between the Syrian and Turkish militaries, the Battle for Saraqib was a test of political will between Turkish President Recep Erdogan and his Russian counterpart, Vladimir Putin. History will show Turkey lost on both accounts.

The Battle for Saraqib had its roots in fighting that began back in December 2019, in the form of an offensive carried out by the Syrian Army, supported by the Russian Air Force, against pro-Turkish opposition forces in and around Idlib province. The Syrian-Russian offensive represented the collapse of the so-called Sochi Agreement of September 17, 2018, which established what were known as “de-escalation zones” separating the Syrian Army from anti-government rebel forces in Idlib. As part of the Sochi Agreement, Turkey set up a dozen “observation posts”—in reality, fortified compounds housing several hundred troops and their equipment—throughout the Idlib de-escalation zone.

In exchange for legitimizing the existence of fortified Turkish observation posts, the Sochi Agreement mandated specific actions on Turkey’s part, including overseeing the establishment of a “demilitarized zone” within the de-escalation zone where tanks, artillery and multiple rocket launchers were to be excluded, and from which all “radical terrorist groups” would be removed by October 15, 2018. Moreover, Turkey was responsible for restoring transit traffic on two strategic highways linking the city of Aleppo with Latakia (the M4 highway) and Damascus (the M5 highway.)

While Turkey established its fortified observation posts, it failed to live up to any of its commitments under the Sochi Agreement—no demilitarized zones were created, no heavy equipment evacuated, and no “radical terrorist groups” removed from the de-escalation zone. This last point was of particular note, since the most prominent of these “radical terrorist groups”—Hayat Tahrir al-Sham, or HTS—was also the largest and most effective of the anti-Assad groups operating in Idlib province.

The objective of the December 2019 Syrian military offensive was to achieve through force of arms what Turkey had failed to do—restore transit traffic capability for both the M4 and M5 highways and, in doing so, evict HTS and other anti-Assad rebel groups from the de-escalation zones. By early February 2020 the Syrian Army had, through its advances, surrounded a number of Turkish observation posts, putting Turkey in the politically difficult situation of sitting and watching while the anti-Assad forces it had helped create, train and equip were being defeated on the field of battle.

Turkey sought to blunt the Syrian advance on Feb. 3, by reinforcing its observation post located near the strategic town of Saraqib, which overlooked the juncture of the M4 and M5 highways. Whomever controlled Saraqib likewise controlled both highways. When a large Turkish military convoy heading toward Saraqib was brought under Syrian artillery fire, killing five Turkish soldiers and three Turkish civilian contractors, Turkey responded by shelling Syrian Army positions, killing scores of Syrian soldiers. This was the opening round of what would become the Battle for Saraqib and represented the first large-scale combat between the Syrian and Turkish militaries since the Syrian crisis began in 2011.

The Syrian attack on the Turkish Army in Idlib was a red line for President Erdogan, who in a statement made before Turkish parliamentarians on Feb. 5, warned that “if the Syrian regime will not retreat from Turkish observation posts in Idlib in February, Turkey itself will be obliged to make this happen.” Erdogan backed up his rhetoric by deploying tens of thousands of Turkish troops, backed up by armor and artillery, to its border with Syria, while continuing to dispatch reinforcements to its beleaguered observation posts inside Idlib.

On Feb. 6, the Syrian Army captured Saraqib. Four days later, on Feb. 10, Turkish-backed rebels, backed by Turkish artillery, launched a counterattack against Syrian Army positions around Saraqib, which was beaten back by heavy Syrian artillery fire. In the process, the Turkish observation near the village of Taftanaz was hit by Syrian shells, killing five Turkish soldiers and wounding five others. The Turks responded by striking Syrian Army positions throughout Idlib province with sustained artillery and rocket fire.

Speaking to Turkish parliamentarians after the attack on Taftanaz, Erdogan declared that “we will strike regime forces everywhere from now on regardless of the Sochi deal if any tiny bit of harm comes to our soldiers at observation posts or elsewhere,” adding that“We are determined to push back (regime forces) behind the borders of the Sochi deal by the end of February.”

The capture of Saraqib and the vital M4-M5 highway juncture allowed the Syrian Army to seize control of the entire M5 highway for the first time since 2012. The Syrian Army then proceeded to push west, toward the city of Idlib, closing to within eight miles of the provincial capital. In order to blunt the Syrian advances, Turkey deployed hundreds of Special Forces who integrated into the ranks of the anti-regime units, helping coordinate their attacks with Turkish artillery and rocket supporting fires. Starting Feb. 16, the rebel fighters, supported by Turkish Special Forces, launched a relentless attack against Syrian Army positions in and around the village of Nayrab, located mid-way between Idlib and Saraqib. Nayrab eventually fell on the night of Feb. 24. The cost, however, was high—hundreds of rebel fighters were killed, along with two Turkish soldiers.

The Turks and their rebel allies then turned their sights on Saraqib itself, pushing out of Nayrab and securing a foothold in Saraqib’s eastern suburbs and cutting the M5 highway in several locations. The Syrian Army had shifted most of its offensive power to the southwest, where they were advancing toward the M4 highway. The Syrians called in fighters from Hezbollah and pro-Iranian militias to help stabilize the Saraqib front. The Turkish military, in an effort to break up Russian and Syrian aerial attacks, began employing man-portable air defense systems (MANPADS), firing more than 15. While none of these hit their targets, they did cause the Russians and Syrian to abort their attacks and leave the area.

In retaliation for the Turkish employment of MANPADS, Russia and Syrian aircraft struck a Turkish mechanized battalion operating in southern Idlib on Feb. 27, killing more than 33 Turkish soldiers, and wounding some 60 more. This attack sent shock waves through Turkey, with Erdogan threatening to punish all parties responsible, including the Russians (who denied their involvement in the attack, despite evidence to the contrary.)

On March 1 President Erdogan ordered Turkish forces to carry out a general offensive in Idlib, named Operation Spring Shield, intended to drive Syria and its allies back to the positions they held at the time of the Sochi Agreement in September 2018. The combined Turkish-rebel offensive immediately stalled in the face of steadfast Syrian resistance, backed by Russian air strikes. The Syrian Army recaptured Saraqib and took control of the entire M5 highway, reversing the earlier Turkish gains.

By March 4, the situation facing the Turkish-backed rebel fighters was so dire that they gave up all pretense of independent operations, and instead intermixed themselves within the Turkish outposts to avoid being targeted by the Russian Air Force. Erdogan, recognizing that the game was up, flew to Moscow on March 5 for an emergency summit with Russian President Vladimir Putin, where they negotiated the terms of a new ceasefire agreement.

The Moscow Summit was a bitter pill for Erdogan to swallow. Although formulated as an “additional protocol” to the existing September 2018 Sochi Agreement, the deal struck between Erdogan and Putin in Moscow was very much a document of surrender for the Turks. His fiery rhetoric and threats to push the Syrian Army and its allies out of Idlib the contrary, Erdogan was compelled to accept a new “de-escalation” zone defined by the frontlines as they stood on March 6.

Moreover, the Turks were now compelled to share enforcement and monitoring of a 12-kilometer “demilitarized zone” straddling the M4 highway with Russian military patrols. Lastly, adding insult to injury, the Turks were denied a no-fly zone over Idlib, ceding control of the air to the Russian Air Force, while still being required to disarm and remove all persons belonging to terrorist organizations, which in this case meant HTS, the most numerous and effective of the anti-Assad rebel groups. In short, Russia secured for Syria all its hard-won victories, while ceding nothing to Turkey save a face-saving ceasefire.

For Syria and Russia, the Battle of Saraqib was about restoring Syrian sovereignty over the totality of Syrian territory; for Turkey, it was about securing lasting Turkish control and influence over the northwestern Syrian province of Idlib. Turkey lost on both accounts. While Turkey has been allowed to maintain its chain of fortified “observation posts”, the vast majority of these are surrounded by the Syrian Army, and of no military value.

Moreover, the dismal performance of the Turkish Army and its anti-Assad allies against the Syrian Army and its allies, including the Russian Air Force, in the Idlib campaign as a whole, and the Battle of Saraqib in particular, have put to rest any thoughts Erdogan might have retained about imposing Turkey’s will on either Damascus or Moscow; Turkey now knows that there will not be a Turkish military solution to the problem of Idlib.

How Turkey Lost a Battle of Wills, and Force, to Russia

0 thoughts on “How Turkey Lost A Battle Of Wills, And Force, To Russia”