HOME / Economy / Russia-India-China will be the big G20 hit

Russia-India-China will be the big G20 hit 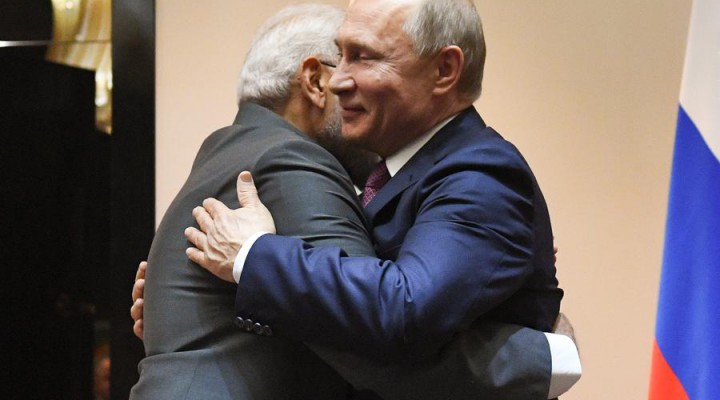 India under Modi, an essential cog in US strategy, gets cozy with China and Russia

It all started with the Putin-Xi Jinping summit in Moscow on June 5. Far from a mere bilateral, this meeting upgraded the Eurasian integration process to another level. Putin and Xi discussed everything from the progressive interconnection of the New Silk Roads with the Eurasia Economic Union, especially in and around Central Asia, to their concerted strategy for the Korean peninsula.

A particular theme stood out: They discussed how the connecting role of Persia in the Ancient Silk Road is about to be replicated by Iran in the New Silk Roads, or Belt and Road Initiative. And that is non-negotiable. Especially after the Russia-China strategic partnership, less than a month before the Moscow summit, offered explicit support for Tehran signaling that regime change simply won’t be accepted, diplomatic sources say.

At the SCO summit we had Putin, Xi, Modi, Imran Khan and Iran’s Rouhani sitting at the same table. Hanging over the proceedings, like concentric Damocles swords, were the US-China trade war, sanctions on Russia and the explosive situation in the Persian Gulf.

Rouhani was forceful – and played his cards masterfully – as he described the mechanism and effects of the US economic blockade on Iran, which led Modi and leaders of the Central Asian “stans” to pay closer attention to Russia-China’s Eurasia road map. This occurred as Xi made clear that Chinese investments across Central Asia on myriad BRI projects will be significantly increased.

Russia-China diplomatically interpreted what happened in Bishkek as “vital for the reshaping of the world order.” Crucially, RIC – Russia-India-China – not only held a trilateral but also scheduled a replay at the upcoming G20 in Osaka. Diplomats swear the personal chemistry of Putin, Xi and Modi worked wonders.

The RIC format goes back to old strategic Orientalist fox Yevgeny Primakov in the late 1990s. It should be interpreted as the foundation stone of 21st century multipolarity, and there’s no question how it will be interpreted in Washington.

India, an essential cog in the Indo-Pacific strategy, has been getting cozy with “existential threats” Russia-China, that “peer competitor” – dreaded since geopolitics/geostrategy founding father Halford Mackinder published his “Geographical Pivot of History” in 1904 –  finally emerging in Eurasia.

RIC was also the basis on which the BRICS were set up. Moscow and Beijing are diplomatically refraining from pronouncing that. But with Brazil’s Jair Bolsonaro seen as a mere Trump administration tool, it’s no wonder that Brazil has been excluded from the RIC summit in Osaka. There will be a perfunctory BRICS meeting right before the start of the G20 on Friday, but the real deal is RIC.

Pay attention to the go-between

The internal triangulation of RIC is extremely complex. For instance, at the SCO summit Modi said that India could only support connectivity projects based on “respect of sovereignty” and “regional integrity.” That was code for snubbing the Belt and Roads Initiative – especially because of the flagship China-Pakistan Economic Corridor, which New Delhi insists illegally crosses Kashmir. Yet India did not block the final Bishkek declaration.

What matters is that the Xi-Modi bilateral at the SCO was so auspicious that Foreign Secretary Vijay Gokhale was led to describe it as “the beginning of a process, after the formation of government in India, to now deal with India-China relations from both sides in a larger context of the 21st century and of our role in the Asia-Pacific region.” There will be an informal Xi-Modi summit in India in October. And they meet again at the BRICS summit in Brazil in November.

Putin has excelled as a go-between. He invited Modi to be the guest of honor at the Eastern Economic Forum in Vladivostok in early September. The thrust of the relationship is to show to Modi the benefits for India to actively join the larger Eurasia integration process instead of playing a supporting role in a Made in USA production.

That may even include a trilateral partnership to develop the Polar Silk Road in the Arctic, which represents, in a nutshell, the meeting of the Belt and Road Initiative with Russia’s Northern Sea Route. China Ocean Shipping (Cosco) is already a partner of the Russian company PAO Sovcomflot, shipping natural gas both east and west from Siberia.

Xi is also beginning to get Modi’s attention on the restarting possibilities for the Bangladesh-China-India-Myanmar (BCMI) corridor, another major Belt and Roads project, as well as improving connectivity from Tibet to Nepal and India.

Impediments, of course, remain plentiful, from disputed Himalayan borders to, for instance, the slow-moving Regional Comprehensive Economic Partnership (RCEP) – the 16-nation theoretical successor of the defunct Trans-Pacific Partnership. Beijing is adamant the RCEP must go into overdrive, and is even prepared to leave New Delhi behind.

One of Modi’s key decisions ahead is on whether to keep importing Iranian oil – considering there are no more US sanctions waivers. Russia is ready to help Iran and weary Asian customers such as India if the EU-3 continue to drag the implementation of their special payment vehicle.

India is a top Iran energy customer. Iran’s port of Chabahar is absolutely essential if India’s mini-Silk Road is to reach Central Asia via Afghanistan. With the Trump administration sanctioning New Delhi over its drive to buy the Russian S-400 air defense system and the loss of preferred trade status with the US, getting closer to Bridge and Road – featuring energy supplier Iran as a key vector – becomes a not-to-be-missed economic opportunity.

With the road map ahead for the Russia-China strategic partnership fully solidified after the summits in Moscow, St. Petersburg and Bishkek, the emphasis now for RC is to bring India on board a full-fledged RIC. Russia-India is already blossoming as a strategic partnership. And Xi-Modi seemed to be in synch. Osaka may be the geopolitical turning point consolidating RIC for good.

Far from quiet on the US vs Russia-China front