Barbarism begins at home in America 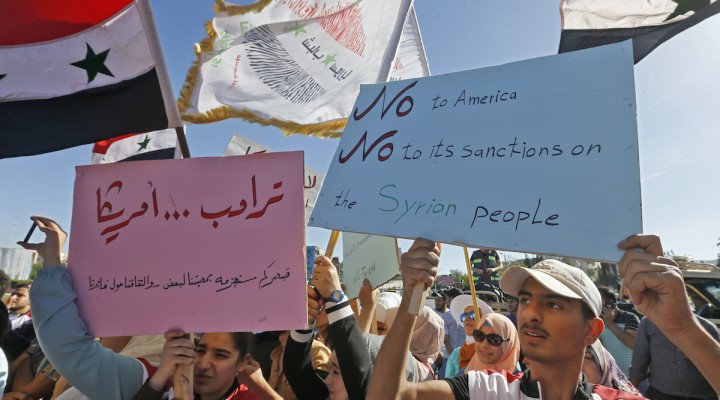 Greece invented the concept of barbaros. Imperial Rome inherited it as barbarus.

The original meaning of barbaros is rooted in language: an onomatopoeia meaning “unintelligible speech” as people go “bar bar bar” when they talk.

Homer does not refer to barbaros, but to barbarophonos (“of unintelligible speech”), as in those who don’t speak Greek or speak very badly. Comic poet Aristophanes suggested that Gorgias was a barbarian because he spoke with a strong Sicilian dialect.

Barbaru meant “foreigner” in Babylonian-Sumerian. Those of us who studied Latin in school remember balbutio (stammer, stutter, babble).

So it was speech that defined the barbarian compared to the Greek. Thucydides thought that Homer did not use “barbarians” because in his time Greeks “hadn’t yet been divided off so as to have a single common name by way of contrast”. The point is clear: the barbarian was defined as in opposition to the Greek.

The Greeks invented the barbarian concept after the Persian invasions by Darius I and Xerxes I in 490 and 480-479 BC. After all they had to clearly separate themselves from the non-Greek. Aeschylus staged The Persians in 472 BC. That was the turning point; after that “barbarian” was everyone who was not Greek – Persians, Phoenicians, Phrygians, Thracians.

Adding to the schism, all these barbarians were monarchists. Athens, a new democracy, considered that to be the equivalent of slavery. Athens extolled “freedom” – which ideally developed reason, self-control, courage, generosity. In contrast, barbarians – and slaves – were childish, effeminate, irrational, undisciplined, cruel, cowardly, selfish, greedy, luxurious, pusillanimous.

From all of the above two conclusions are inevitable.

1. Barbarism and slavery was a natural match.

2. Greeks thought it was morally uplifting to help friends and repel enemies, and in the latter case Greeks had to enslave them. So Greeks should by definition rule barbarians.

History has shown that this worldview not only migrated to Rome but afterwards, via Christianity post-Constantine, to the “superior” West, and finally to the West’s supposed “end of history”: imperial America.

Rome, as usual, was pragmatic: “barbarian” was adapted to qualify anything and anyone that was not Roman. How not to relish the historical irony: for the Greeks, the Romans were also – technically – barbarians.

Rome focused more on behavior than race. If you were truly civilized, you would not be mired in the “savagery” of Nature or found dwelling in the outskirts of the world (like Vandals, Visigoths, etc..) You would live right in the center of the matrix.

So everyone who lived outside of Rome’s power – and crucially, who resisted Rome’s power – was a barbarian. A collection of traits would establish the difference: race, tribe, language, culture, religion, law, psychology, moral values, clothing, skin color, patterns of behavior.

People who lived in Barbaria could not possibly become civilized.

Starting from the 16th century, that was the whole logic behind the European expansion and/or rape of the Americas, Africa and Asia, the core of the mission civilisatrice carried as a white man’s burden.

With all that in mind, a number of questions remain unanswered. Are all barbarians irredeemably barbarous – wild, uncivilized, violent? The “civilized”, in many cases, may also be considered barbarian? Is it possible to configure a pan-barbarian identity? And where is Barbaria today?

The end of secularized religion

Barbarism begins at home. Alastair Crooke has shown how in an extremely polarized US “both parties” are essentially accusing each other of barbarism: “these people lie, and would stoop to any illegitimate, seditionist (i.e. unconstitutional) means, to obtain their illicit ends.”

Adding to the complexity, this clash of barbarisms opposes an old, conservative guard to a Woke Generation in many respects aping a Mao Cultural Revolution mindset. “Woke” could easily be interpreted as the opposite of the Enlightenment. And it’s an Anglo-America phenomenon – visible among the aimless, masked, unmasked, socially disillusioned, largely unemployed and not-distanced victims of the raging New Great Depression. There is no “woke” in China, Russia, Iran or Turkey.

Yet the central Barbaria question goes way beyond street protests.  The “indispensable nation” may have irretrievably lost the Western equivalent of the Chinese “mandate of heaven”, dictating, unopposed, the parameters of its own construct: “universal civilization”.

The fundaments of what amounts to a secularized religion are in tatters. The “narrow, sectarian pillar” of “liberal core tenets of individual autonomy, freedom, industry, free trade” was “able to be projected into a universal project – only so long as it was underpinned by power.”

Roughly for the past two centuries this civilizational claim served as the basis for the colonization of the Global South and the West’s uncontested domination over The Rest. Not anymore. Signs are creeping everywhere. The most glaring is the evolving Russia-China strategic partnership.

The “indispensable nation” lost its military cutting edge to Russia and is losing its economic/trade preeminence to China. President Putin was compelled to write a detailed essay setting the record straight on one of the pillars of the American Century: that only happened, to a large extent, due to the sacrifices of the USSR in WWII.

It’s quite enlightening to check how the civilizational claim is unraveling across Southwest Asia – what the Orientalist perspective defines as the Middle East.

In a paroxysm of missionary zeal, the self-appointed heir to imperial Rome – call it Rome on the Potomac – is bent, via the Deep State, on destroying by all means necessary the allegedly “barbarian” Axis of Resistance: Tehran, Baghdad, Damascus and Hezbollah. Not by military means, but via economic apocalypse.

This testimony, by an European religious figure working with Syrians, concisely shows how the Caesar Act sanctions – perversely depicted as a “Civilian Protection Act” and drafted under Obama in 2016 – are designed to harm and even starve local populations, deliberately steering them towards civil unrest.

James Jeffrey, the US envoy to Syria, even rejoiced, on the record, that sanctions against “the regime” have “contributed to the collapse” of what is essentially Syrian livelihood.

Rome on the Potomac sees the Axis of Resistance as Barbaria. For one hegemonic US faction, they are barbarous because they dare to reject the superior, “moral” American civilization claim. For another no less hegemonic faction, they are so outright barbarian that only regime change would redeem them. A great deal of “enlightened” Europe happens to supports this interpretation, slightly sweetened by humanitarian imperialism overtones.

The Wall of Alexander

It’s Iraq all over again. In 2003, the beacon of civilization launched Shock and Awe on “barbarian” Iraq, a criminal operation based on entirely falsified intel – very much like the recent chapter of never-ending Russiagate, where we see malign Russkies playing the role of paymasters to Taliban with the intent of killing (occupying) US soldiers.

This “intel” – corroborated by no evidence, and parroted uncritically by corporate media – comes from the same system that tortured innocent prisoners in Guantanamo until they confessed to anything; lied about WMDs in Iraq; and weaponized and financed Salafi-jihadis – sweetened as “moderate rebels” – to kill Syrians, Iraqis and Russians.

It’s no wonder that across Iraq in 2003, I never ceased to hear from Sunnis and Shi’ites alike that the American invaders were more barbarous than the Mongols in the 13th century.

One of the key targets of the Caesar Act is to close for good the Syrian-Lebanese border. An unintended consequence is that this will lead Lebanon to get closer to Russia-China. Hezbollah’s secretary-general Hassan Nasrallah has already made it very clear.

Nasrallah added a subtle historical insight – emphasizing how Iran has always been the strategic, cultural go-between for China and the West: after all, for centuries, the language of choice along the Ancient Silk Roads was Persian. Who’s the barbarian now?

The Axis of Resistance, as well as China, know that a festering wound will have to be tackled: the thousands of Salafi-jihadi Uighurs scattered across the Syria-Turkey border, which could become a serious problem obstructing the overland, northern Levant route of the New Silk Roads.

In Libya, part of the Greater Middle East, utterly destroyed by NATO and turned into a wasteland of warring militias, the “leading from behind” fight against Barbaria will take the form of perpetuating the warring – local populations be damned. The playbook is a faithful replay of the 1980-1988 Iran-Iraq war.

In a nutshell, the “universal civilization” project has been able to utterly destroy the “barbarian” state structures of Afghanistan, Iraq, Libya and Yemen. But that’s where the buck stops.

Iran has drawn the new line in the sand. Profiting from the hardened experience of living four decades under US sanctions, Tehran sent a large business delegation to Damascus to schedule the supply of necessities and is “breaking the fuel siege of Syria by sending several oil tankers” – much as the breaking of the US blockade on Venezuela. The oil will be paid in Syrian lira.

So Caesar Act is actually leading Russia-China-Iran – the three key nodes in myriad strategies of Eurasia integration – to get closer and closer to the “barbarian” Axis of Resistance. A special feature is the  complex diplomatic-energy ties between Iran and China – also part of a long-term strategic partnership. That includes even a new railway to be built linking Tehran to Damascus and eventually Beirut (part of BRI in Southwest Asia) – which will also be used as an energy corridor.

On Surah 18 of the Holy Quran, we find the story of how Alexander the Great, on his way to the Indus, met a faraway people who “could scarcely understand any speech”. Well, barbarians.

The barbarians told Alexander the Great they were being threatened by some people they called – in Arabic – Gog and Magog, and asked for his help. The Macedonian suggested they get a lot of iron, melt it down and build a giant wall, following his own design. According to the Quran, as long as Gog and Magog were kept away, behind the wall, the world would be safe.

But then, on Judgment Day, the wall would fall. And hordes of monsters would drink away all the waters of the Tigris and the Euphrates.

Buried beneath some hills in northern Iran, the fabled Sadd-i-Iskandar (“Wall of Alexander”) is still there. Yes, we will never know what sort of monsters, engendered by the sleep of reason, lurk across Barbaria.

0 thoughts on “Barbarism begins at home in America”