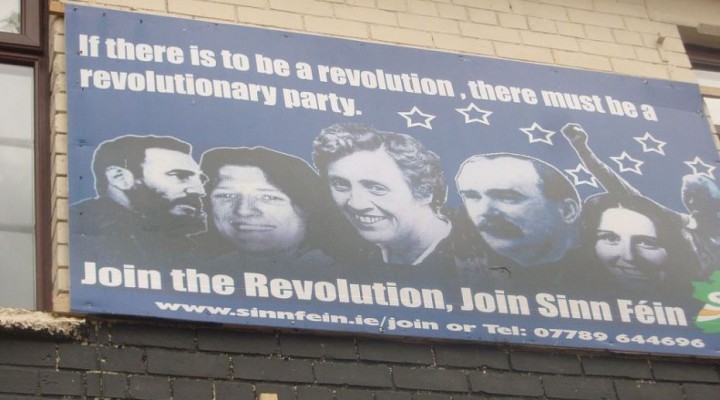 Sinn Fein is capitalizing on the electoral results to push for its long-coveted goal of full independence from Britain to create a united Ireland.

Pro-Irish unity party Sinn Fein is ramping up calls for a referendum on the reunification of Ireland following its stunning election victory this week. This bangs another nail in the constitutional coffin of the United Kingdom following its divisive Brexit departure from the European Union.

With Britain having officially exited from the EU that seismic shift has fired up long-held claims for independence in Scotland and for the reunification of Ireland. Scottish nationalists, who want to remain in the EU, have stepped up demands for a referendum on independence from Britain since the general election in December when their party won by a landslide in Scotland.

Now the Irish question has gained powerful impetus from the historic victory of Sinn Fein in the general election this week held in the Republic of Ireland. The party came first in the popular vote, beating the two main establishment parties which have dominated government in Dublin for nearly a century. The two-party status quo has been smashed by Sinn Fein’s electoral breakthrough.

Mary Lou McDonald, the leader of Sinn Fein, announced that the British government must now prepare for holding a referendum in Ireland on the issue of reunification of the Republic of Ireland with Northern Ireland. The latter has been British-held territory since 1921 when a separatist movement in Ireland failed to gain full territorial independence from Britain’s empire.

Sinn Fein, formerly the political wing of the guerrilla movement, the Irish Republican Army (IRA), is the only party to have an all-Ireland structure. In the British election held in December, Sinn Fein became the leading party in Northern Ireland. Demographic changes over the past century have resulted in nationalists outnumbering unionists who want to remain part of the United Kingdom.

In the Republic of Ireland, Sinn Fein has now gained the biggest popular vote. It is capitalizing on the electoral results in both jurisdictions of Ireland to push for its long-coveted goal of full independence from Britain to create a united Ireland.

Due to the different electoral system in the Republic of Ireland – a system of proportional representation – there is as yet no party to emerge this week with a clear majority to form a government in Dublin. Sinn Fein won 37 seats out of a total of 160 in the Dublin parliament. The two traditional ruling parties, Fianna Fail and Fine Gael, won 38 and 35 seats respectively. Fianna Fail picked up one more seat than Sinn Fein despite losing the popular vote because of transferred votes from other parties.

Sinn Fein’s success was due to the party tapping widespread popular disgust with the two centrist parties which are wedded to neoliberal economics and austerity. Aching social problems of economic inequality, chronic housing shortages and failing public services propelled voters to back Sinn Fein’s leftwing manifesto for “workers and change”.

The election was a popular rebuke for the two traditional main parties. Both lost significant seats compared with the last election in 2016. Sinn Fein’s gain was also matched by similar gains for a host of other small leftwing parties and independents.

McDonald, the Sinn Fein leader, says her party is now aiming to forge a coalition administration with the other small parties to form a “people’s government for change”. If that can be negotiated successfully, that would see McDonald becoming the next prime minister of the Republic of Ireland.

Combined with a Sinn Fein majority in Northern Ireland the political configuration across Ireland now represents a formidable mandate for Irish reunification and independence from Britain.

There would seem to be an unstoppable dynamic of natural justice. Sinn Fein is the oldest political party in Ireland. Formed in 1905, it historically spearheaded the movement for independence when the whole of Ireland was formerly under British colonial rule. In a British general election in 1918, Sinn Fein won over 70 per cent of the vote across the entire island on a platform for independence. London rejected the mandate back then, which resulted in a bloody war of independence and the partitioning of Ireland to produce partial freedom for what became the Republic of Ireland and a British entity known as Northern Ireland.

Neither of the erstwhile two main parties in the Republic of Ireland, Fianna Fail or Fine Gael, ever gave much advocacy to Irish reunification as an aspiration. Their shared political establishment devolved over the decades into parochial politics of cronyism and complacency.

For decades Sinn Fein was damaged politically because of the armed conflict in the North of Ireland between the IRA and British state forces. Many Irish voters were alienated by the association of politics and guns. The British and Irish news media, as well as political establishments, ran intensive campaigns to demonize Sinn Fein as “terrorist sympathizers”. There is still a residual antipathy among the Irish establishment. Even today, the two traditional parties have sniffily said they would not form a coalition government with Sinn Fein, owing its past connection with the IRA.

The conflict in Northern Ireland ended more than two decades ago in 1998 with the signing of a peace agreement, the Good Friday Accord. In that internationally binding accord, the British government committed itself to Irish unity if a majority of the population on the island agreed to it.

Many voters have evidently moved on from the past conflict. The old demonization trick against Sinn Fein has lost its allure. Social and economic issues have come to dominate voter concerns, and the two previous ruling parties are seen to be part of the problem, not the solution.

An eventual referendum which takes Northern Ireland out of the United Kingdom in addition to the Scottish nationalists clamoring for independence spells the break-up of Britain’s constitutional amalgam of England, Wales, Scotland and Northern Ireland.

A major part of the dissolution dynamic has been British Prime Minister Boris Johnson’s desire for Brexit which has unleashed separatist forces within the UK with a vengeance. In which case, it might be said: ought to have been careful what you wished for Boris!