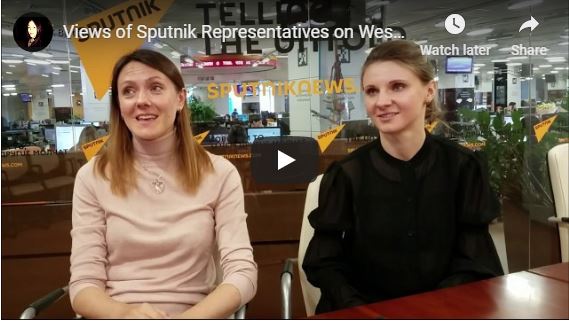 When in Moscow in August, I met Victoria Polikarpova, head of the International News Desk at Sputnik News, and Daria Gerasina, head of the English language newswire.

Victoria was showing me around Sputnik and we got to speaking about the reflexive Russiophobic reaction some people have when it comes from news emanating from Sputnik (or RT.com).

Victoria and Daria speak of the attacks (from the US mainly) on Sputnik and cognitive dissonance media consumers face regarding Russian news.

“…It’s hard to work in this atmosphere, because you’ve been labelled as ‘disinformation’, and you cannot access officials, especially US officials.

During the last three years, it’s been awful in terms of getting any kind of interviews, especially with Congressmen, Senators, and even with experts, because they’re afraid to be labelled propaganda too. Because if you speak to a Russian agency, then you can be accused of working for the Kremlin.”