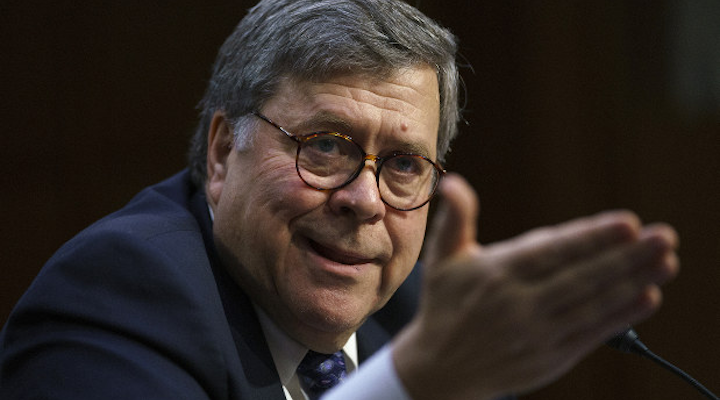 In an interview with Associated Press, US Attorney General William Barr put all conspiracy theories to rest once and for all by assuring the world that alleged sex trafficker and alleged billionaire Jeffrey Epstein’s death was simply the result of a very, very, very long series of unfortunate coincidences.

“I can understand people who immediately, whose minds went to sort of the worst-case scenario because it was a perfect storm of screw-ups,” Barr told AP on Thursday.

This perfect storm of unlucky oopsies include Epstein being taken off suicide watch not long after a previous suicide attempt and shortly before his successful suicide, suggestions that the first attempt may have actually been an assault via attempted strangulation inflicted by someone else, two security guards simultaneously falling asleep on the job when they were supposed to be checking on Epstein, one of those guards not even being an actual security guard, security footage of two cameras outside Epstein’s cell being unusable due to a mysterious technical glitch, at least eight Bureau of Prisons officials knowing Epstein wasn’t meant to be left alone in his cell and leaving him alone in his cell anyway, Epstein’s cellmate being transferred out of their shared space the day before Epstein’s death, Epstein signing a will two days before his death, unexplained injuries on Epstein’s wrists and shoulder reported by his family after the autopsy, and a forensic expert who examined Epstein’s body claiming that his injuries were more consistent with homicide than suicide.

Attorney General William P. Barr acknowledged his own initial suspicion that Mr. Epstein may have been murdered but said the evidence ultimately showed the financier hanged himself.

“The attorney general also sought to dampen conspiracy theories by people who have questioned whether Epstein really took his own life, saying the evidence proves Epstein killed himself,” AP reports. “He added that he personally reviewed security footage that confirmed that no one entered the area where Epstein was housed on the night he died.”

Well if reporting that he’s reviewed footage which we were previously told didn’t exist isn’t enough to dampen those kooky conspiracy theories, I don’t know what is.

So there you have it. The US government says that an intelligence asset with damning information on many powerful individuals did in fact kill himself due to an admittedly bizarre and wildly unlikely series of strange coincidences. I for one have no more questions. Checkmate, conspiracy theorists.

“Mr. Epstein’s death in August at a federal detention center in Manhattan set off a rash of unfounded conspiracy theories on social media that were picked up and repeated by high-profile figures, including Mayor Bill de Blasio and former Mayor Rudolph W. Giuliani. No matter their ideology, the refrain of the theories was the same: Something did not add up,” says The New York Times in its report Barr’s statements.

Couldn’t have said it better myself. It’s a completely unfounded conspiracy theory to believe that someone with ties to powerful institutions and individuals might be murdered in a way that was made to look like a suicide. We don’t live in a world where opaque organizations do evil things in secret, we live in a world where the government is always our friend and the TV would never lie to us. I’m glad these comments made by Barr (whose father in another strange coincidence gave Epstein his first job) have at long last struck a fatal blow to anyone who would doubt the beneficent hand of our beloved institutions.

He added that he personally reviewed security footage that confirmed that no one entered the area where Epstein was housed on the night he died. https://apnews.com/4ff27f28f32d446795b65ac7dd8cc4ac …

AG Barr: Epstein’s death was a ‘perfect storm of screw-ups’

It’s hard to imagine what more the US government and its allied political/media class could possibly do to quell conspiracy theories that now have Hollywood celebrities clamoring for government internet censorship. I guess if they really, really wanted to dampen conspiracy theories, there are a few more extremely drastic steps that could be taken. Steps like not lying all the time. And maybe not hiding immense amounts of information about what the most powerful institutions in the world are doing behind thick walls of government opacity. And maybe cease promoting conspiracies themselves, as with Russiagate. And maybe stop secretly doing depraved things. And maybe stop engaging in conspiracies.

Pretty sure Barr’s assurances will be enough to do the trick, though.

0 thoughts on “Barr Says Epstein Died By A Series Of Coincidences, Ending All Conspiracy Theories Forever”