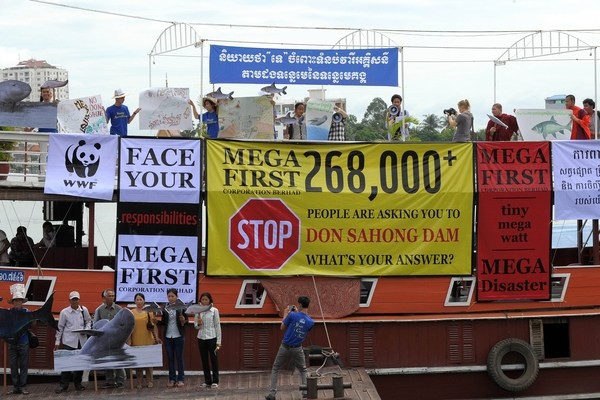 At first glance the human rights and environmental issues surrounding a proposed dam seem like serious objections to their construction. In some cases they may be.

In other cases – these concerns are manufactured, promoted, and cynically exploited by foreign special interests who seek to impede dam construction and likewise impede the march forward of the developing nations seeking to build them.

The key to knowing the difference is following the money behind groups opposing construction – and in many cases – the same handful of opposition groups can be found protesting the construction of dams across the entire developing world.

Much of what is claimed and promoted in the West to be “international” often merely means Western fronts seeking to impose themselves and their interests “internationally.”

“International Rivers” is no different. As a supposed nongovernmental organization (NGO) – it claims to be “at the heart of the global struggle to protect rivers and the rights of communities that depend on them.”

In reality, International Rivers is a Western corporate-funded foundation dedicated to imposing control over the use of rivers worldwide through a network of likewise Western-funded “local” NGOs.

International Rivers’ opposition to dam construction in the developing world is not predicated on any genuine concern for human rights or environmental issues surrounding rivers – or “the rights of communities that depend on them” – but instead is dictated by who is constructing the dam.

Dams financed by the likewise deceptively named World Bank receive only token attention from International Rivers – which was only created toward the end of the World Bank’s own dam building spree – while those financed and constructed jointly with China are now the target of years-long protest campaigns promoted endlessly across the Western corporate media.

International Rivers – over the years – has been funded by the following; The Sigrid Rausing Trust, Tides Foundation, Google, Open Society, the Ford Foundation, and many others.

Many of those contributing to International Rivers are in turn creations of corporate-financier interests themselves.

Direct sponsors, such as the Sigrid Rausing Trust, Ford Foundation, and Open Society, are also involved in funding policy think tanks such as the Brookings Institution – a pro-war, pro-corporate conglomeration that features alongside the Sigrid Rausing Trust as donors (.pdf), banking empires including JP Morgan, Bank of America, and Barclays Bank, big-oil interests including Exxon, Chevron, Shell, and Statoil, as well as big-defense corporations Boeing, Northrop Grumman, and Raytheon.

It is clear that these special interests are not concerned with the human or environmental impact of hydroelectric energy production – considering many are directly overseeing the global petroleum racket and the many much more serious human and environmental abuses that stem from it.

Instead, this objection to dam construction represents a desire to eliminate both potential competitors, as well as any semblance of independence in regions of the planet the West seeks to project its power into.

With think tanks like Brookings drawing up plans for literal wars as a means of projecting Western power across the globe, it is not difficult to understand lesser forms of projecting power – through co-opted NGOs operating under the guise of “human rights” and “environmentalism” – are also very much amongst their tools.

Not What is Being Built or Where, But Who is Building it and Why That is the “Problem”

In fact, the notion that International Rivers and the Western media promoting their work are politically motivated – merely hiding behind human rights and environmentalism rather than upholding either – is buttressed by International Rivers itself in a post titled, “Banks and Dam Builders.” It admits:

Traditionally, the World Bank Group has been the most important financier of large dams. For decades, the World Bank funded the construction of mega-dams across the world.
In recent years, however, Chinese financial institutions have taken over this role, and have triggered a new boom in global dam building. Other public sector national banks, including Brazilian banks, Thai banks, and Indian banks, have also financed an increasingly important share.
Here, International Rivers admits the real problem is not dams in and of themselves, but dams being financed and built independently of Western involvement and benefit. The recent surge in dam projects is taking place in a region of the world the West openly seek to influence, manipulate, exploit, and even use as a collective proxy against China. It cannot do so if the region is working together on massive multinational infrastructure projects with China and each other.

Fake News to the Rescue

The Foreign Correspondents’ Club of Thailand (FCCT) has already repeatedly been exposed taking money from the very same corporate-funded foundations underwriting International Rivers – and lying about it.

The FCCT – a front of Western corporate media organizations including the BBC, AFP, AP, Reuters, and others – poses as a journalist network but in reality functions as a public relations front promoting Western interests in both Thailand and wider Southeast Asia, merely under the guise of journalism.

That the FCCT recently hosted International Rivers and a panel discussion on, “Silencing the Mekong The making of Xayaburi dam,” targeting the joint Thai-Laotian project should come as no surprise. The idea of either nation let alone both cooperating in the construction of essential infrastructure independently of the West and its interests sets a precedent for both nations to continue doing so in the future and for other nations in the region to follow suit.

Many of the supposed concerns revolve around protecting remote impoverished villages whose inhabitants are actually the cause of overfishing and placing several species on the endangered list – rather than allowing the project to move forward, providing energy, flood control, and economic development that could provide better and more sustainable occupations for local communities.

The FCCT’s various individual media members have taken turns writing favorable articles promoting protesters opposed to this dam and others. The FCCT panel discussion itself includes several of these supposedly local “NGOs” including Salforest which is in fact also funded by Western corporate and government foundations.

Nothing about the funding of those opposed to the dams is mentioned, nor any critical questions regarding possible motivations of foreign-funded opposition groups beyond “human rights” and “environmental” concerns.

If the US and Western Europe believe Facebook ads allegedly funded by foreign interests and targeting their elections constitutes an “attack” on their sovereignty – what does an entire protest movement funded and directed from the other side of the planet constitute when it attempts to block massive and beneficial infrastructure projects tied to national and regional development in Southeast Asia?

Let the nations along the Mekong River decide themselves on whether or not to build dams – free of foreign interference and money tied to interests already guilty of serial offenses against both human rights and the environment – and offenses many times worse than the construction of any dam could possibly pose.

Since the FCCT represents Western media organizations guilty of aiding and abetting special interests in those serial abuses – no one is less qualified than the FCCT to host a panel discussion on affairs that are ultimately those of Thailand and Laos. And once again, the FCCT is caught meddling under the guise of journalism rather than just reporting the news.