“Donald Trump has had a closer relationship with Israeli leaders than any president in American history. I think he genuinely doesn’t care that the Israelis spy on the United States. I think he doesn’t see the harm in this and does not feel threatened by it.” — CIA Whistleblower John Kiriakou

MPN- The culprit behind a massive spying scandal in the U.S. capital has been exposed. A slew of surveillance devices found around the District of Columbia over the years was the work of Israeli spies. But it’s unlikely that the U.S. will take any action.

Three former U.S. officials have informed Politico that the devices — International Mobile Subscriber Identity (IMSI) catchers, or “Stingrays” — that were discovered near the White House, Senate and other sensitive locations belonged to the Israeli government.

Typically used by police, Stingrays, a dragnet as opposed to a targeted surveillance device, work like miniature cell phone towers. When one is set up, it sucks in all cell phone communications within a specific radius, intercepting them before they make it to the tower to be transmitted to the intended recipient. The metadata sent — including texts and other private information — by everyone within the radius is then viewable by whoever is controlling the Stingray.

Freddie Martinez, executive director of the Lucy Parsons Labs, an organization that has fought successfully for government disclosure on the use of Stingrays, told MintPress News:

These devices are an extremely low cost way to discover who a person or group of people are and track their movements in real time. As the price of technology drops, the risk of intelligence and corporate espionage only increases. In an extreme example, you [could use a Stingray] to find out everyone who routinely goes to an embassy and try to learn about their patterns of life… Generally, they are used to track the real-time location of people or hunt down a person based on an identifier like their phone numbers.

They [Stingrays] can function because of technical exploits in cellphone networks and it is up to international bodies to “fix” the problem. Given the billions of phones already in the world and how complex their capabilities’ range — from older models of 10 years ago to newer 5G devices — there doesn’t seem to be any appetite to take on such a huge technical problem.”

DHS confirms unauthorized Cell-Site Simulators in Washington, DC. This map from 2014 shows where 15 of the 18 known unauthorized Stingrays were in/around the District of Columbia. 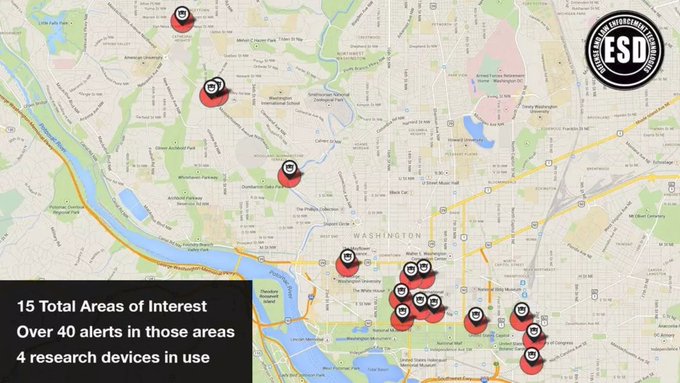 16 people are talking about this

John Kiriakou, the former CIA officer who blew the whistle on the agency’s torture program, told MintPress that the Israelis have a reputation for harebrained or otherwise brazen operations.

The Israelis are indeed notorious in the intelligence community for taking risks that other intelligence services would never even consider. The Israelis are also famous for their ‘us against the world’ mentality. Federal law enforcement officers have told me that the Israelis have dozens, perhaps hundreds, of intelligence agents at work across the United States, without the permission or consent of the U.S. government, stealing American secrets at every opportunity and working to infiltrate the policy community, think tanks, government, and defense contractors.”

The U.S. government has known about the devices — which cost about $150,000 a pop — for years. But in the past two years, the FBI, Secret Service, and the Department of Homeland Security (DHS) concluded that the Israelis were behind the operation.

One source told the outlet that analyzing the devices can “tell you a little about their history, where the parts and pieces come from, how old are they, who had access to them, and that will help get you to what the origins are.”

While the Chinese, who have been regularly caught doing intelligence operations in the U.S., were also seen as potential suspects, they were determined as unlikely to have placed the devices based on a close analysis of the devices.”

“It was pretty clear that the Israelis were responsible,” one former intelligence official told the publication.

The outlet’s sources went on at length about red flags they’d seen in terms of Israeli spying. “There were suspicions that they [the Israelis] were listening in,” one said, because they “flaunted” knowledge that “was hard to explain otherwise.”. March 2018 letter from the Department of Homeland Security to Sen. Ron Wyden in response to his questions about the use of Stingrays by a foreign government in Washington, D.C.

Denials no one in the know believes

The highest levels of the Israeli and American governments — Prime Minister Benjamin Netanyahu and President Donald Trump, respectively — have both responded to the report with vehement denials.

“I don’t think the Israelis are spying on us; I really would find that hard to believe. My relationship with Israel has been great,” Trump told reporters.

It’s a claim made frequently by Israeli officials and often scoffed at by American spies. Kiriakou told MintPress that the Israelis should not be taken seriously. “It is disingenuous to the point of offensiveness for the Israelis to protest that they do not spy on the United States,” he said.

According to Politico, the targets of the surveillance devices around the White House were people close to Trump, with whom he keeps in regular contact. That jibes with previous instances of Israeli spying on the U.S. — for instance, when Netanyahu was reported to have used tapes of phone calls between President Bill Clinton and intern Monica Lewinsky that were said to be “steamy” as leverage for the release of Israeli spy Jonathan Pollard from prison. The Stingrays were first spotted by DHS, working in partnership with a private company called ESD America to drive through Washington with equipment to detect the devices in January 2017.

In response to a letter demanding answers on the matter from Senator Ron Wyden (D-OR), DHS wrote in March 2018:

[The National Protection and Programs Directorate of DHS] believes the use of these devices by malicious actors to track and monitor cellular users would be unlawful and threaten the security of communications, resulting in safety, economic, and privacy risks. [We agree] that the use of IMSI catchers by foregin governments may threaten U.S. national and economic security.”

The department’s wording is careful: using qualifiers like “malicious actors” and “may threaten.” But it is accurate in its assessment of the economic and privacy risks. The volume of metadata gathered by Stingrays can be used to predict, for example, a corporate merger, lawsuits, or the Federal Reserve changing interest rates, experts have argued. Not to mention the privacy threats to people engaging in First Amendment-protected activity — such as the large, annual rally against the conference of the American Israel Public Affairs Committee (AIPAC).

Generally, the reason we don’t hear much about Stingrays is that they are operated by spies [on a federal and international level] and police at the local level. The details of who owns them, how they are being used, and what their capabilities are remain hidden from the public, through either classification laws or non-disclosure agreements.”

Reports on documents exfiltrated by NSA whistleblower Edward Snowden characterized one file from the CIA as saying that intelligence sharing between the United States and Israel against third parties is unrivaled and that Israel had also established an expansive spy network conducting espionage against the U.S.

While the United States is technically forbidden (a rule it systematically undermined, as the Snowden documents also showed) from spying on its own citizens, that Israel has received not even a slap on the wrist over the Stingray operation in D.C. begs the question: would the United States accept and exploit Israeli intelligence gathered on its own soil?

“Donald Trump has had a closer relationship with Israeli leaders than any president in American history,” Kiriakou said. “I think he genuinely doesn’t care that the Israelis spy on the United States.  I think he doesn’t see the harm in this and does not feel threatened by it.”

0 thoughts on “Trump Brushes Israeli Dragnet Surveillance of D.C. Under the Rug”