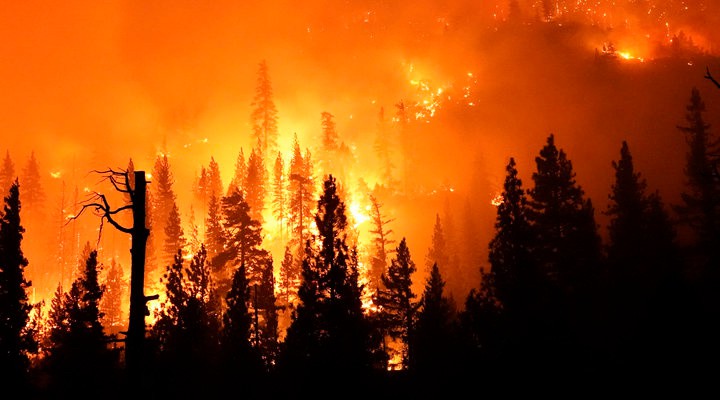 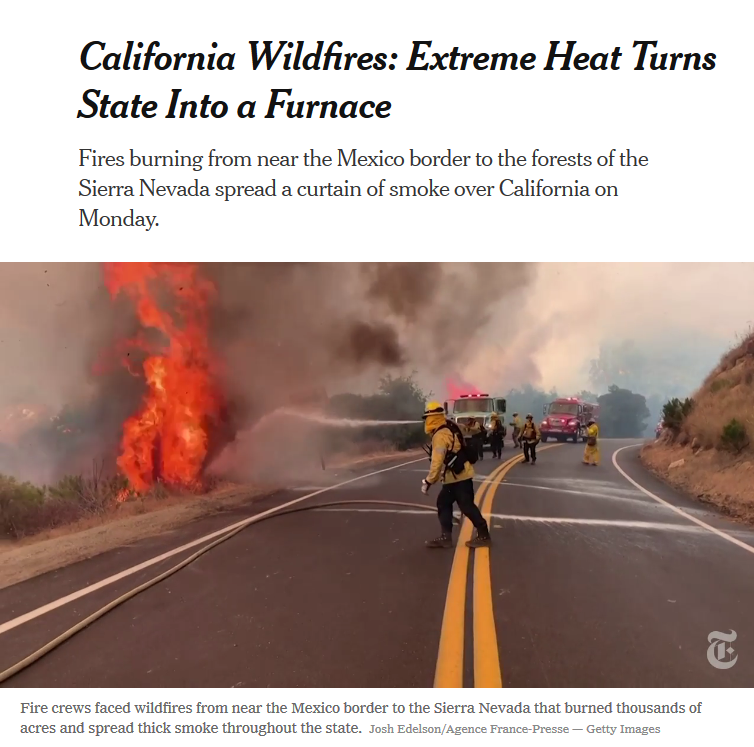 Six New York Times reporters (9/7/20) teamed up to produce more than 1,700 words about how “extreme heat [was] roasting California.” None of those words was “climate.”

The West is on fire, quite literally. A record-breaking heatwave has sparked unprecedented wildfires up and down the coast, turning the sky an apocalyptic, terrifying shade of red. Six of California’s 20 largest-ever fires have occurred this year, over half a million Oregonians have been forced to flee their homes and the destruction from this week’s blazes alone in Washington qualify it as the state’s second-worst fire season in history.

The heatwave and the fires in turn are caused in no small part by human-made global warming. As Scientific American (8/24/20) explains, hotter temperatures, less dependable precipitation and melting snowpack lead to drier soils and parched vegetation, a tinderbox for wildfires. Temperatures have increased by 1.8 degrees Fahrenheit in California since 1980, while rain has decreased by 30% over the same period (Scientific American, 4/3/20).

Yet when discussing the heatwave and the fires, corporate media have been extremely hesitant to even mention climate change, let alone frame the discussion around it. A great many ostensibly in-depth stories discussing the blazes don’t include the words “climate change” (e.g., New York Times, 9/7/20, 9/7/20; LA Times, 9/5/20; NPR, 9/7/20).

Cable news was no better, especially Fox News, where only two of 54 segments on the events discussed climate change, one being a Tucker Carlson monologue attacking the idea, claiming that there was “no evidence” of a connection between climate change and catastrophic fires,  and suggesting anyone bringing it up was simply “lying” (Tucker Carlson Tonight, 9/10/20). Meanwhile, 11 of 37 MSNBC and just five of 49 CNN segments included any mention of climate change.

Even the Weather Channel mostly hasn’t mentioned climate change in its coverage of the West Coast fires (e.g., 9/9/20), though it did have one stand-alone story headlined “Will Extreme Weather Keep Getting Worse? Scientists Say Yes” (9/11/20). 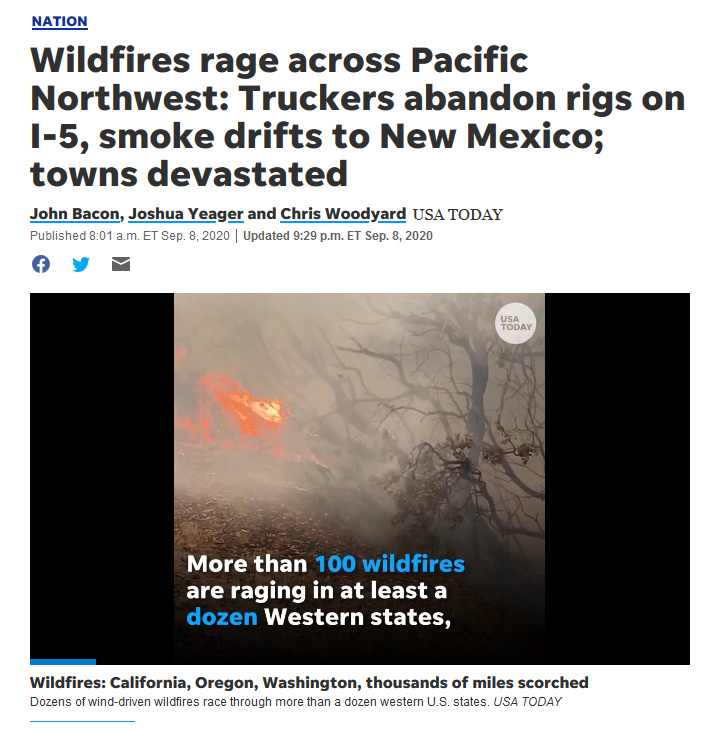 A USA Today story (9/8/20) had one phrase reporting that California Gov. Gavin Newsom said the number of wildfires was “evidence of the effects of climate change”—but devoted more space to noting that one fire “was caused by a smoke-generating pyrotechnic device used by a couple to reveal their baby’s gender.”

In fact, media were more willing to blame gender reveal parties for the historic blazes than climate change. A comprehensive 2,300-word report from USA Today (9/8/20), a newspaper with a particularly egregious history with regard to the environment (FAIR.org, 10/21/18, 12/6/18, 1/1/19), included one sentence noting that “California Gov. Gavin Newsom says wildfire count in the state so far this year is far beyond the number last year, evidence of the effects of climate change,” but devoted an entire section of the article to the gender reveal party.

But the USA Today article was among the better examples of media, with countless others pointing the finger at gender reveal parties without even mentioning climate change at all (e.g., Associated Press, 9/7/20; NPR, 9/7/20; CNN, 9/8/20; CBS News, 9/8/20). Unsurprisingly, Carlson also blamed the party.

The world is currently heating at a faster rate than even the worst-case projections of the ’90s and 2000s. Experts agree that anything over a 2 degree Celsius (3.6 degrees Fahrenheit) rise in temperatures from preindustrial levels would be catastrophic, threatening organized human survival. Yet many are now expecting a 5 degree Celsius (9 degrees Fahrenheit) increase by the end of the century, barring dramatic changes in energy use, making the planet essentially unlivable. Scientists also warn that increased temperatures will create feedback loops, like melting ice sheets and the release of trapped methane, that will accelerate further warming. Surely this would be more relevant information to include than a stray firework at a gender reveal party?

Worse still, a host of media from across the corporate spectrum illustrated their stories about the terrifying heatwave with pictures of people frolicking in streams or by the sea (e.g., CBS News, 9/5/20, 9/6/20; LA Times, 9/6/20; Fox News 9/6/20). None of these examples mentioned climate change, either. Even in an article entitled “California is dangerously hot this weekend,” the New York Times (9/4/20) chose an image of a crowded Santa Monica beach to accompany it, sending mixed signals about just how serious the situation was.

Even in more sober reporting that did put climate change at the front and center there were serious problems. A New York Times story (9/12/20) on the Oregon fires went into detail about how constantly drier weather is leading to far more wildfires, and how they are spreading to the wetter coastal areas, but treated climate change as an unchangeable fact of life, as if it were the ocean’s tides or the orbit of the Earth, not even mentioning that the phenomenon is caused by people—let alone referring to the actions that could be taken to reverse it, such as removing the trillions of dollars of government subsidies on fossil fuel, a Green New Deal, public transport initiatives or a reduction in consumption. 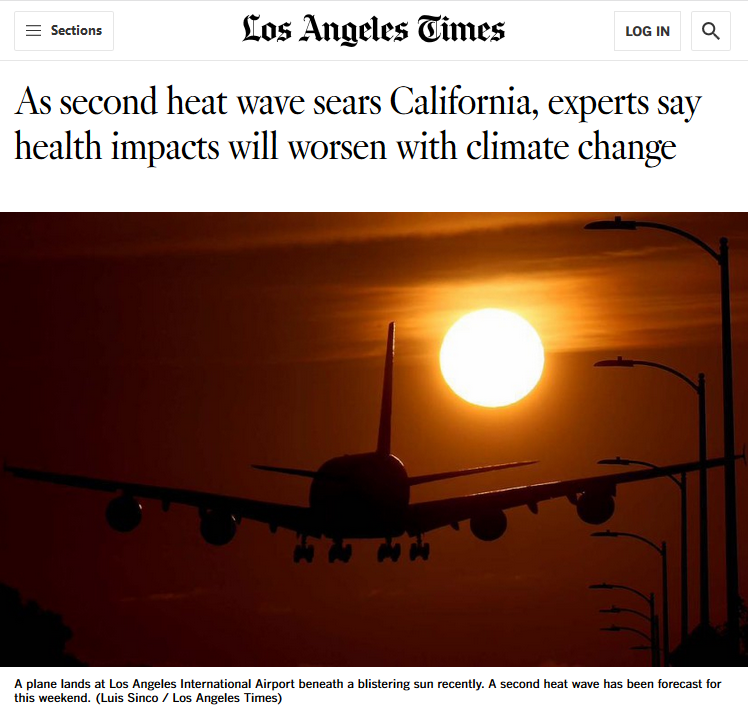 An LA Times article (9/5/20) described climate change as an “unfortunate reality that Californians will increasingly have to get used to.”

LA Times (9/5/20) did the same in its article detailing the health implications of a warming California, giving a list of expert recommendations on keeping cool and avoiding heat stroke during heat waves. But at no point did it address what is causing the increase in temperatures—the unsustainable way in which society is organized around ever-increasing fossil fuel use—let alone any discussion on how to combat it. It’s just an “unfortunate reality that Californians will increasingly have to get used to,” the paper reported.

As the most powerful and influential nation in the world, and also the country that has produced by far the most carbon dioxide emissions historically, the United States has a particular responsibility to lead the fight against climate change. Yet Washington, on the world stage, had proven more of a barrier to action than a leader.

Unfortunately, corporate media has been almost as uninterested in the subject. FAIR (6/3/17) found that in a dozen 2017 interviews with the president, journalists failed to ask President Donald Trump a single climate-related question, allowing him to avoid hard questions about his administration’s destruction of international climate accords. And during the 2016 presidential debates, neither candidate was asked a single climate-related question (FAIR.org, 10/19/16). This cycle’s Democratic candidate debates were little better (FAIR.org, 11/27/19).

When extreme weather events hit, when the public is paying the most attention, corporate media have consistently failed to link those events to human-caused climate change (FAIR.org, 8/1/11, 10/23/19, 1/3/20). They also downplay any connection between global warming and the global refugee crisis, spurred by climate disruption’s forced migrations (FAIR.org, 7/30/19). While there is a long term trend in media towards (slightly) more climate reporting, most of these stories, Emily Atkin of Heated (9/8/20) notes, are stand-alone articles, with media still failing to integrate climate change into day-to-day coverage. Corporate media has also given ample publicity to climate change deniers (FAIR.org, 5/1/07, 1/8/14), while undermining or dismissing serious political attempts to address the problem (FAIR.org, 9/6/19, 11/20/19, 1/31/20).

By failing to inform readers about the (human) cause of catastrophes like the West Coast wildfires (as nearly 80% of Americans want them to), the corporate press — often funded by some of the world’s top polluters—are effectively hindering us from organizing around solutions to the most pressing crisis facing humanity. While it is unreasonable to expect all journalists to be familiar with environmental science, the least they could do is make the connection between human activity and the increasingly common catastrophic weather, and stop illustrating stories about dangerous heat waves with people having fun at the beach.

US Fires as Metaphor