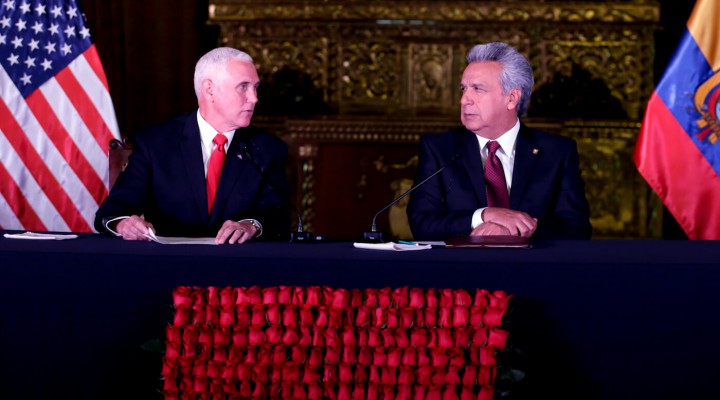 Moreno’s willingness to quickly enact the various other requirements of the IMF loan begs the question of how quickly he will seek to enact the alleged U.S. government demands that have also been linked to the loan, namely Assange’s asylum and Ecuadorian citizenship.

Chelsea Manning’s fight against her subpoena in the U.S. Department of Justice’s grand-jury case targeting WikiLeaks founder and former publisher Julian Assange this past week has revealed several uncomfortable truths, not only about that investigation but also about the fate of Assange, whose asylum in Ecuador’s London embassy hangs precariously in the balance.

While reporting on the probe has largely focused on the nature of the still-sealed DOJ case, most reports have largely missed the fact that the marked increase in activity relating to the probe is directly related to the fact that Ecuador has, by all indications, agreed to rescind Assange’s asylum so that he may be extradited to the United States. As a consequence, the U.S. is moving forward with its case against Assange and WikiLeaks — which began nearly a decade ago in 2010 — now that it has received assurances that Assange’s extradition is a matter of when, not if.

Just days into 2019, the former president of Ecuador, Rafael Correa, who had originally granted Assange asylum in 2012, shared via Twitter a document showing that Ecuador’s current government, led by Lenín Moreno, was “auditing” Assange’s asylum as well as Assange’s Ecuadorian citizenship, which he had been granted in late 2017.

According to the document shared by Correa, the audit will examine the period from January 1, 2012, to September 20, 2018, and will “determine whether the procedures for granting asylum and naturalization to Julian Assange were carried out in accordance with national and international law.” 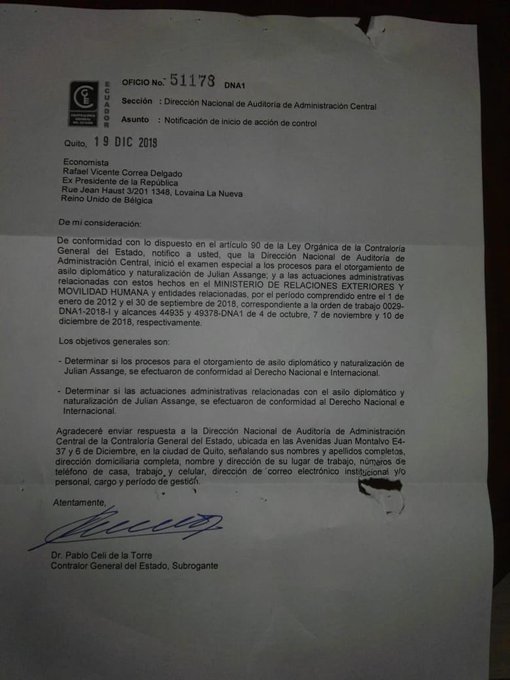 WikiLeaks subsequently shared Correa’s tweet and noted that this seemingly unusual reevaluation of Assange’s asylum was directly related to the Moreno administration’s efforts to secure a loan from the International Monetary Fund (IMF) for a total of $10 billion. Per WikiLeaks, some of the conditions set for Ecuador’s receipt of the IMF loan included U.S. government demands of “handing over Assange and dropping environmental claims against Chevron” for the oil giant’s role in polluting Ecuador’s rainforest and poisoning many of its indigenous inhabitants.

Ecuador has initiated a formal “Special Examination” of Julian Assange’s asylum and nationality (nationals cannot be extradited) as it seeks a $10billion+ IMF bailout for which the US government demanded handing over Assange and dropping environmental claims against Chevron. https://twitter.com/MashiRafael/status/1080503452747341830 … 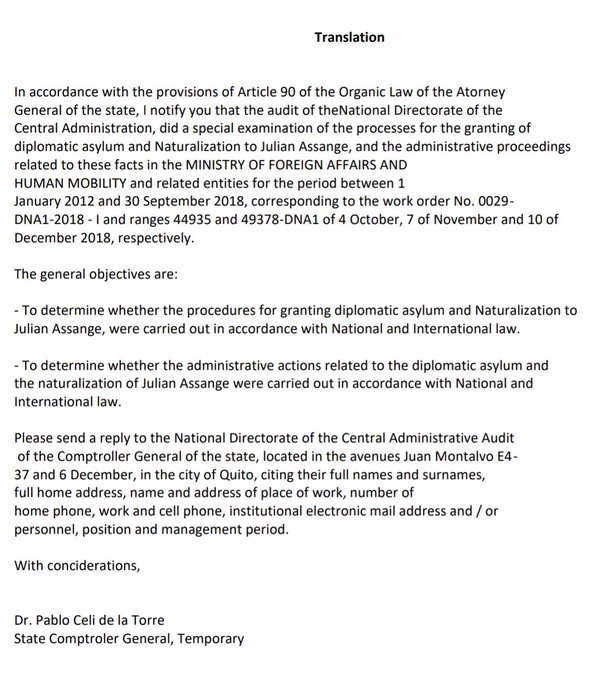 Furthermore, a leaked U.S. Army manual on “Unconventional Warfare” published by WikiLeaks in 2008 noted that the IMF was considered by the U.S. government to be a “financial weapon” to be used in “unconventional warfare” scenarios. As MintPress News recently noted, the manual states that the U.S.’ “persuasive influence” over the IMF can be used by the U.S. military to create “financial incentives or disincentives to persuade adversaries, allies and surrogates to modify their behavior at the theater strategic, operational, and tactical levels,” with such unconventional warfare campaigns highly coordinated with the State Department and the intelligence community.

It is also worth pointing out that Ecuador has been threatened with the financial might of the United States for much more minor issues than Assange’s status, despite its return to Washington’s “good graces” under Moreno’s leadership. For instance, last July, the U.S.threatened Ecuador with “punishing trade measures” if it introduced a measure at the UN that supported breastfeeding over infant formula — a stunning move that showed the international community the U.S.’ willingness to use “economic weapons,” even against allies. Ecuador, of course, immediately acquiesced under the threat of U.S. retribution.

Less than two weeks ago, on February 21, Ecuador signed a deal securing the controversial IMF loan for a total of $4.2 billion, in addition to another $6 billion from other U.S.-dominated financial institutions like the World Bank, for a total of $10.2 billion. If WikiLeaks’ early January warning is to be believed, it can be assumed that deal was secured by Ecuador offering the U.S. assurances that it would soon “hand over” Assange.

Moreno, since he signed on the IMF’s dotted line, has wasted no time in putting into practice the “structural adjustments” and other conditions required by the IMF for Ecuador’s receipt of the loan, including job cuts. In just three days, from February 28 to March 1, Moreno’s government fired nearly 10,000 public officials, according to Ecuadorian media. This is remarkable considering that the deal has not even been granted final approval by the IMF, demonstrating that Moreno is eager to show his willingness to enact the demands of the loan package.

Public ire over the mass firing has grown steadily in recent days, aggravated by the fact that Moreno was implicated in a major corruption scandal just two days before the IMF agreement was signed.

Furthermore, there are indications that Moreno’s government is preparing to drop charges against Chevron — one of the two U.S. government demands made to Ecuador in exchange for the IMF deal, with the other being Assange’s extradition. According to a report published on Wednesday by UPI, Moreno’s government is moving forward with a clean-up of the area that Chevron polluted. As UPI noted:

After 26 years of legal actions in Ecuador, the United States, Canada and Europe that failed to result in any significant cleanup effort of areas affected by crude oil spills, Ecuadorian authorities will start to clean up polluted areas to try to stop the damage.”

This is notable because, as UPI writes, “previously, authorities could not interfere with the spills because the pollution was used as evidence in lawsuits against Chevron.” Thus, the Moreno-led government’s move to clean up the area that had served as key evidence in past Chevron lawsuits suggests that they are preparing to drop their claims against Chevron.

Moreno’s willingness to quickly enact these requirements of the IMF loan begs the question of how quickly he will seek to enact the alleged U.S. government demands that have also been linked to the loan, namely Assange’s asylum and Ecuadorian citizenship. With both now under review since early January, there is reason to believe that the results of this politically-motivated audit could soon be revealed and are likely to be Washington’s liking.

Further evidence that the U.S. is convinced that Ecuador is set to move to strip Assange of his legal protections granted by his asylum and his status as a citizen of Ecuador has come from the progress made by the sealed U.S. charges against the WikiLeaks founder. The existence of the case, which had long been suspected, was inadvertently yet officially confirmed last November when a “clerical error” revealed that the U.S. has criminal charges waiting for Assange should he be extradited to the United States. A subsequent lawsuit to unseal those charges was unsuccessful.

Chelsea Manning revealed on February 28 to the New York Times that she has been ordered to appear before a grand jury regarding the U.S. case against Assange. The subpoena was first issued on January 22, just a few weeks after Ecuador announced it was “auditing” Assange’s asylum and citizenship.

Manning had originally been ordered to appear on February 5, but for still unknown reasons the date was postponed to March 5. Manning had announced she would fight the subpoena, but it was upheld by the court despite the efforts of Manning and her legal team.

Manning’s subpoena notably revealed that the case against Assange is related to WikiLeaks’ publications and his actions well prior to the 2016 publication of emails from the Democratic National Committee and former Hillary Clinton campaign chair John Podesta by the transparency group. This was confirmed by U.S. officials who spoke to the Washington Post. Many of the documents published by WikiLeaks during this time, including the information given by Manning to the group, exposed horrific war crimes that took place under the Bush administration.

Washington Post confirms: “U.S. officials speaking on the condition of anonymity because of grand jury secrecy say the case is based on [Assange’s] pre-2016 conduct, not the election hacks that drew the attention of special counsel Robert S. Mueller” https://www.washingtonpost.com/local/legal-issues/chelsea-manning-fights-subpoena-in-wikileaks-probe/2019/03/05/8351dafa-3eb8-11e9-9361-301ffb5bd5e6_story.html?utm_term=.df1318456361 …

According to a report published last November by the Wall Street Journal, the Department of Justice announced that it was “preparing to prosecute” Assange and was “increasingly optimistic it will be able to get him into a U.S. courtroom.” The report also stated that the DOJ planned to indict Assange in such a way that it would trigger his extradition to the United States to stand trial, following sensitive negotiations with foreign governments, namely Ecuador.

With Ecuador now having signed off on the IMF deal — and with it, demonstrated its willingness to submit to the demands underpinning that deal — the U.S.’ optimism seems to have only grown since last year, a sign that does not bode well for Julian Assange or for anyone who values the public’s right to know and press freedom in the United States and beyond.