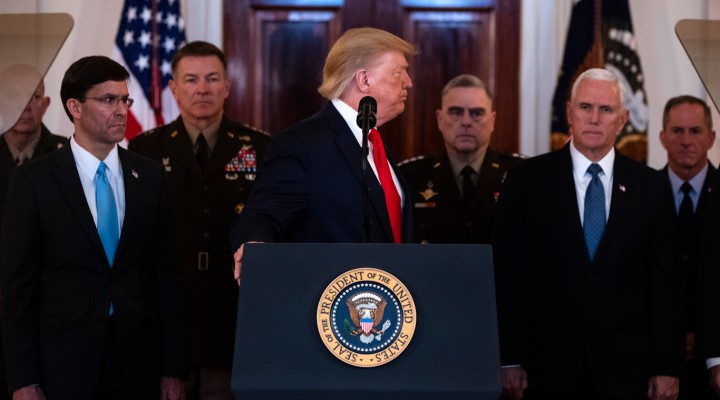 Following Iran’s military response to the deaths of Soleimani and his Iraqi ally, Trump’s tone — at least publicly — was dramatically less bellicose than his recent tweets promising to strike Iranian territory should Tehran retaliate against the US.

MPN- In a statement delivered late Wednesday morning, President Donald Trump made it clear that the U.S. would not militarily respond to the missile strikes launched by Iran on U.S. military installations in Iraq on Tuesday, strikes that were themselves retaliation for the Trump administration’s killing of Iranian General Qassem Soleimani and the leader of Iraq’s Popular Mobilization Front, Abu Mahdi al-Muhandis.

Despite the ultimate de-escalation following several hours of tension after Iranian missiles struck the Ain al-Assad base in western Iraq, Trump struck a tough tone towards Iran and outlined few new policies to be pursued in his short speech. Among the policies outlined in Trump’s speech was the imminent imposition of “new punishing sanctions” against Iran, which is already heavily sanctioned by the U.S., and calls to increase NATO’s involvement in the Middle East, reflecting the president’s unwillingness to pursue a direct military approach to Iran without at least some international backing. This despite the fact that several NATO allies have already begun to withdraw their troops from the Middle East amid fears of a direct war between the U.S. and Iran.

Trump also called for a diplomatic solution with Iran, deriding the JCPOA, the binding deal signed during the Obama administration between Iran, China France, Germany, Russia, United Kingdom, and the United States. Trump’s offer is likely to be ill-received as the deal’s European signatories, China, Russia and the Iranian government have all sought to salvage the deal from which Trump unilaterally withdrew nearly two years ago.

Trump’s statement ultimately ended with an unexpected call for peace, a stark departure from his earlier threats to strike 52 Iranian targets, including cultural sites, should Iran retaliate militarily for the assassination of General Soleimani. “To the people and leaders of Iran, we want you to have a future and a great future, one that you deserve. One of prosperity at home and harmony with the nations of the world. The United States is ready to embrace peace with all who seek it,” the president said.

Perhaps more telling than what President Trump did say is what he left out of his speech. He did not comment on the several disputed reports of U.S. troops withdrawing from bases in Iraq, Kuwait or Syria prior to and after the Iranian strike. If these claims are substantiated, they would explain Iran’s limited reprisal as Iranian officials have stated multiple times since the assassination of General Soleimani that their new policy, and ultimately their revenge, would be to force the U.S. to remove its military assets from the Middle East entirely. Trump also failed to address now confirmed reports that the U.S., as well as Iraq, received advanced warnings of the Iranian strike before it took place, which signaled that Iran had little desire to spill the blood of the American and Iraqi soldiers present at the bases targeted during the strikes.

A recent vote by Iraq’s Parliament to expel U.S. troops and claims made by Iraq’s Prime Minister Adil Abdul-Mahdi that Trump threatened his life and the life of Iraq’s Defense Minister if they pursued reports of a “third side” attacking both Iraqi protesters and Iraqi security forces near the U.S. embassy in the lead-up to the U.S.’ killing of Soleimani and al-Muhandis were also left unaddressed. Adil Abdul-Mahdi has asserted that the motives behind these threats were the U.S. administration’s desire to see Iraq’s government rescind an “oil for reconstruction” deal with China.

Following Iran’s military response to the deaths of Soleimani and his Iraqi ally, Trump’s tone — at least publicly — was dramatically less bellicose than some of the president’s recent tweets promising to strike Iranian territory should Tehran retaliate against the United States. While the promised strikes on those sites did not materialize, they did signal a new era for the U.S. military in the Middle East and potentially the world, one in which U.S.’ hegemony is more dubious than ever. Indeed, the United States military has not been directly targeted by another government in recent memory, especially without being followed by an overwhelming U.S. military response.

0 thoughts on “Trump Backs Away from Threats to Retaliate for Iranian Missile Strikes, Promises New Sanctions”