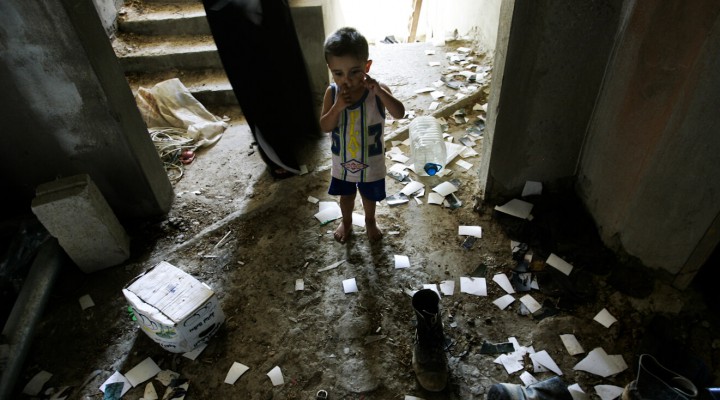 Key figures in Israel’s government apparently believe that the grand scale of planned attacks on Lebanese civilians and civilian infrastructure will result in so much destruction and death that it will help to ensure an Israeli victory.

Erdan claimed that groups like Lebanon’s Hezbollah use existing international laws of war “to destabilize the ability of democracies to defend their citizens” and “force [democracies] to fight against terrorists with their hand chained behind their backs.” The ILC’s director, Nitsana Darshan-Leitner, seconded Erdan’s claim but argued that changing international law is difficult, thus making it more practical to change how existing laws of war are interpreted, a task she suggested be performed by military prosecutors.

According to the Jerusalem Post, the laws currently governing international warfare are aimed specifically at reducing the suffering of civilians and, as the Post article suggested, Erdan wanted to change these measures aimed at protecting civilians prior to the “next war” between Israel and Lebanon because in that war “Israel will have no choice but to harm Hezbollah rocket sites and Lebanese infrastructure.”  Erdan’s argument hinges on the commonly repeated accusation by Israeli officials that Hezbollah uses civilians as cover for military operations, but a comprehensive 249-page study by Human Rights Watch found that not to be the case. In fact, the study found that even “a simple movement of vehicles or persons – such as attempting to buy bread or moving about private homes – could be enough to cause a deadly Israeli airstrike that would kill civilians.”

As MintPress previously reported, Israel’s government has been preparing for an imminent war with Lebanon and specifically Hezbollah — which is a strong political force in Lebanon, with the coalition of which it is part holding a legislative majority in Lebanon’s parliament — for well over a year. It has warned prominent U.S. Senators no only that it planned for a “bloody” war against Lebanon, but that the Israeli military planned specifically to target Lebanese civilians and civilian infrastructure, including residential areas.

During a visit to Israel last March, U.S. Senator Lindsey Graham (R-SC), a close ally of the Trump administration, stated that Israel’s Likud-led government was requesting “ammunition, ammunition, ammunition” from the U.S. government, as well as diplomatic support for when Israel strikes civilian targets — such as “civilian apartment buildings, hospitals, and schools” — because Hezbollah has become “integrated” into these structures. Prominent Israeli politicians have also made the case for targeting Lebanese civilians in the coming war between Israel and Lebanon. For instance, Naftali Bennett, who until recently was Israel’s minister of education, told Haaretz in 2017 that civilians “must” be targeted the next time Israel and Lebanon go to war:

The Lebanese institutions, its infrastructure, airport, power stations, traffic junctions, Lebanese Army bases –- they should all be legitimate targets if a war breaks out… This will mean sending Lebanon back to the Middle Ages.”

Under existing international law, the bombing of residential buildings, hospitals and schools is a clear war crime, though this hasn’t stopped Israel’s government from bombing these same structures in Gaza with regularity in recent years. In addition, during the 2006 war between Israel and Lebanon, Israel’s military killed at least 1,109 civilians, injured over 4,000 and displaced an estimated 1 million according to figures compiled by Human Rights Watch. The staggering civilian death toll sparked condemnation from international human-rights groups.

Thus, Erdan’s recent comments suggest that Israel’s government, in a war against Lebanon it plans to instigate under the guise of “preventative” defense, is planning to commit war crimes on a much larger scale than what was done in 2006 and is thus pushing for international law to be changed to accommodate those plans. However, Israel has long been able to avoid accountability for war crimes, especially following the U.S. adoption of the “Negroponte doctrine” to protect Israel from criticism as well as any punitive action taken by the U.N. Security Council in relation to war crimes committed by Israel.

This makes it more likely that this current push led by Erdan to alter international law is aimed more at global public opinion, by redefining international law so that Israel could avoid being accused of war crimes for such attacks on civilians and civilian infrastructure in a future war. A man repairs a home, in the background buildings destroyed by Israeli airstrikes in the southern suburbs of Beirut, Lebanon, Aug. 27, 2006. Photo | AP

Part of the strategy in targeting Lebanese civilians specifically appears to be Israel’s strong desire to win a “decisive victory” against Hezbollah in this future war, as opposed to the humiliating defeat its military suffered in 2006. It appears that key figures in Israel’s government believe that the grand scale of planned attacks on Lebanese civilians and civilian infrastructure will result in so much destruction and death that it will help to ensure an Israeli victory.

Though it is unlikely Israel’s effort will succeed in changing international law, it may change how its government interprets such laws — as Darshan-Leitner recently suggested — and use such interpretations to secure even more robust diplomatic cover from its more influential allies such as the United States and to more easily avoid the war crime label from international media outlets and foreign governments. Such a move may also prompt the Trump administration in the U.S. to do the same, particularly given the slew of recent pardons given to accused and convicted U.S. war criminals by President Donald Trump.

US troops “prepared to die for the Jewish state”

In addition, the U.S. military itself is likely to quickly become embroiled in this coming Israel-Lebanon war, given that head of U.S. Central Command (CentCom), Lt. Gen. Richard Clark, told the Jerusalem Post last year that IDF leadership (as opposed to American military leadership) would “probably” have the last word as to whether U.S. forces would join the IDF during a future war and that U.S. troops were “prepared to die for the Jewish state.” IDF Brigadier General Zvika Haimovitch responded to Clark’s comments by stating: “I am sure once the order comes we will find here U.S. troops on the ground to be part of our deployment and team to defend the state of Israel.”

While much media attention has focused on the possibility of an imminent U.S. war with Iran, it is important to point out — especially in light of Israel’s comments — that Israel has been planning for over a year to go to war with Lebanon. Indeed, last year, Israeli officials told U.S. Senators Lindsey Graham and Chris Coons (D-DE) that “Southern Lebanon is where the next war is coming.”

Yet, the push for war with Iran and the planned war against Lebanon may be related, given that Hezbollah’s Secretary-General Sayyed Hassan Nasrallah stated the following late last month:

Any attack on Iran will not remain confined to Iran’s borders. The entire region will burn, leading to all U.S. forces and interests in the region being annihilated.”