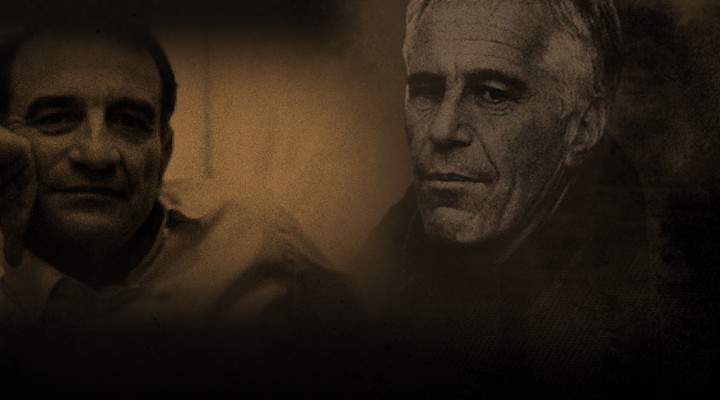 MintPress speaks with Ari Ben-Menashe, a former Israeli spy who worked closely with Robert Maxwell, Ghislaine Maxwell’s father, as part of their work with Israeli military intelligence and had frequent encounters with Jeffrey Epstein.

MPN– In recent weeks, renewed attention has been brought to the allegations that Jeffrey Epstein and Ghislaine Maxwell’s sex trafficking and sexual blackmail operation was run on behalf of Israeli military intelligence. Those claims revolve around statements made by a former Israeli military intelligence official turned public relations consultant Ari Ben-Menashe, whose allegations regarding the Epstein scandal were reported by MintPress this past October.

Ben-Menashe’s claims related to Epstein first surfaced in an interview between Ben-Menashe and Zev Shalev of the independent news outlet, Narativ. As detailed in a MintPress summary and commentary of that interview, Ben-Menashe claimed to have seen Jeffrey Epstein in the office of Robert Maxwell, Ghislaine Maxwell’s father, several times in the 1980s.

At the time, Ben-Menashe was in close contact with Robert Maxwell regarding their work mutual work with Israeli military intelligence. Maxwell, in addition to heading a media empire and being a one-time member of U.K. parliament, was a longtime operative for Israeli intelligence, so much so that his 1991 funeral was attended by no less than six serving and former heads of Israeli intelligence as well as several high-ranking Israeli politicians and prime ministers.

MintPress recently conducted its own interview with Mr. Ben-Menashe as part of an ongoing investigation on the life and connections of the now-infamous Jeffrey Epstein.

Part of that interview is provided below with relevant commentary, particularly regarding claims related to the relationship between Epstein and former Israeli Prime Minister Ehud Barak, Epstein’s trip to Tel Aviv immediately prior to his first arrest, and the reasons for Israeli military intelligence’s interest in orchestrating and financing a major sexual blackmail operation targeting top U.S. politicians.

MintPress News first asked Ben-Menashe about Robert Maxwell, a known asset and operative for Israeli intelligence, having recruited Jeffrey Epstein. Ben-Menashe =confirmed this to MintPress and also noted that, after their initial meeting, Epstein was frequently present in Maxwell’s office in London.

During the 1980s, as MintPress previously reported, Epstein claimed to have been an intelligence operative and so-called “bounty hunter” in the world of shadow finance. During this time, he was known to have developed close relationships with several British arms dealers, particularly Sir Douglas Leese. Thus, Epstein appeared to frequently be traveling between the Middle East and London, which is also supported by Epstein’s now-infamous Austrian passport which he was believed to have carried during this period of time.

Ben-Menashe told MintPress that he had not only met Epstein after Epstein had been recently recruited by Israeli military intelligence, but had seen him on several occasions thereafter as Epstein “used to be in [Robert Maxwell’s] office [in London] quite often” and would arrive there between trips to and from Israel.

In addition, Ben-Menashe revealed his understanding of why Epstein was eventually shepherded into acting as a professional sexual blackmailer on behalf of Israeli military intelligence. Per Ben-Menashe, there were concerns among Israeli intelligence figures that, following the Reagan Era, a new president would push for Israel to make peace with the Palestinians, something those officials sought to avoid by any means necessary.

ABM | Here’s the thing… Mr. Carter… as in President Carter… the Israelis feared that Mr. Clinton, when he was campaigning for President, will be a repeat of Mr. Carter. He wanted to press them for peace with the Palestinians and all that stuff. They feared… Clinton wasn’t that… but they feared he was that… And I think Mr. Epstein was sent early on to catch up with President Clinton.

Thus, Ben-Menashe argues, when Bill Clinton’s candidacy in the 1992 U.S. Presidential election became clear, efforts were made to target him via sexual blackmail and Jeffrey Epstein was chosen for that purpose. Bill Clinton was eventually blackmailed by the state of Israel and his administration was also targeted by Israeli espionage as part of the “Mega” spy scandal. Epstein’s involvement in the Clinton administration and his visits to the White House date back to Clinton’s first year in office. More information on the Epstein-Clinton relationship can be found in this MintPress report.

In addition, MintPress also asked Ben-Menashe if he was aware of Ghislaine Maxwell being directly involved with her father’s intelligence-related activities prior to his death in 1991. Ben-Menashe noted that Ghislaine accompanied her father so frequently, including on a now-infamous 1989 party on Maxwell’s yacht where Donald Trump and several key figures in the PROMIS software scandal were in attendance, that she was involved in his intelligence-related activities to some extent. However, he stopped short of saying how involved she was or what she has specifically been involved in prior to her father’s death.

One of the more controversial ties between Epstein and powerful politicians is that between Epstein and former Israeli Prime Minister Ehud Barak. Barak has claimed to have only met Epstein in 2002 and, from that point on, their relationship was very public, with Barak frequently visiting and even spending the night at residences owned by Epstein, including apartments where he housed the underage girls that he exploited. Barak also visited Epstein’s now-infamous island and recruited him to help fund the Israeli intelligence-connected company, Carbyne911.

However, there appear to be indications that Epstein and Barak may have met much earlier than Barak has since claimed. Given that Ben-Menashe claimed to have learned of Epstein’s recruitment by Israeli military intelligence in the 1980s, MintPress asked if one of the people involved in his recruitment was Ehud Barak. Barak served as head of Israel’s military intelligence directorate, Aman, from April 1983 to January 1986.

Ben-Menashe could not recall the exact year when he first became aware of Epstein’s recruitment by Israeli military intelligence but stated that it was “most likely” during Ehud Barak’s tenure as the head of Aman. Yet, even if Epstein’s recruitment did not take place while Barak headed Aman, it is highly likely — per Ben-Menashe — that Epstein had met Barak during this time because “Robert Maxwell became buddies with Ehud Barak…and he [Robert Maxwell] probably introduced them, the young man [Epstein] to Mr. Barak” if the two were not already acquainted.

Since the Epstein scandal broke, Ehud Barak has insisted that he did not meet Epstein until the year 2002 and claimed that the two had been introduced by former Israeli Prime Minister Shimon Peres. Ben-Menashe dismissed the possibility that this claim was true, emphatically stating that he was “sure they had met before” and that he did not believe that their first meeting was in 2002.

Just a few months before he was sentenced to prison for the first time in June 2008, Jeffrey Epstein had made a sudden visit to the Israeli capital of Tel Aviv. In April of that year, the Palm Beach Daily News reported that Epstein was staying at the Tel Aviv Hilton and quoted an Epstein spokesman as saying that he was “spending Passover, meeting with Israeli research scientists, and taking a tour of military bases.”

Sometime prior to Epstein’s sentencing on June 30 of that year, Alexander Acosta –then-U.S. Attorney for the Southern District of Florida– signed off on a lenient sentence for Epstein who was charged with soliciting sex from a minor. That legal arrangement has since been nicknamed the “sweetheart deal.” Acosta later told Trump transition officials prior to his nomination for Secretary of Labor that his decision to approve the “sweetheart deal” came after he had been told to back off in the Epstein case because Epstein “belonged to intelligence.”

Though Acosta did not specify from whom he had received this information, former CIA agent Phil Giraldi has made a convincing case that they originated from Epstein’s then-lawyer Alan Dershowitz, a close associate of Epstein with ties to high-ranking Israeli politicians, and Barry Krischer, then-Florida State Attorney for Palm Beach who recently received an award from the Anti-Defamation League (ADL) for his “outstanding contribution to the legal profession and to the community at large.”

As detailed in a previous MintPress report on Epstein’s ties to Israel published this past August, the ADL’s long-time top funders have close ties to Epstein and his sexual blackmail network, particularly the Bronfman family of Seagrams fame.

Ben-Menashe told MintPress that Epstein’s 2008 Tel Aviv visit was likely “blowing smoke” and involved Epstein “trying to make himself important maybe not to get arrested” and “hoping that the Israelis would help him.” He then added that “At the time they probably did” help Epstein, but added that “the second time around [i.e. 2019], well…it would be a harder sell.”