HOME / WORLD / Five Days after Bolton’s Reversal, US Syrian Troop Withdrawal Sort of Back On 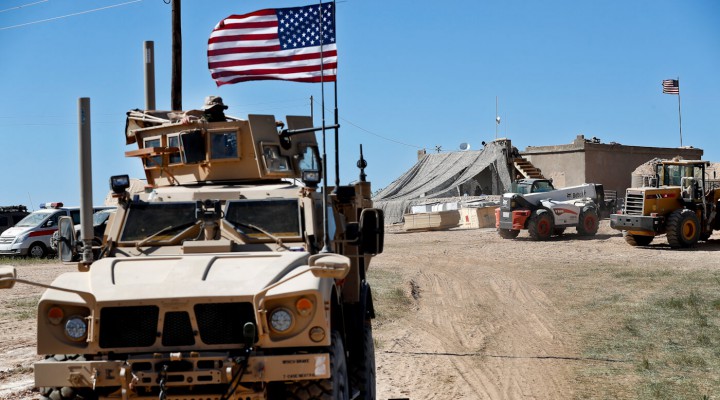 Though it is nearly impossible to say for sure what is really going on in the Trump administration at this point, on Friday the U.S.’ Syria policy, specifically regarding the withdrawal of U.S. troops illegally occupying part of the country, experienced what appears to be yet another drastic reversal.

On Friday, the Trump administration’s Syria policy, specifically regarding the withdrawal of U.S. troops illegally occupying part of the country, experienced what appears to be yet another drastic reversal just days after top administration officials National Security Adviser John Bolton and Secretary of State Mike Pompeo announced the de facto cancellation of the troop pull-out.

According to reports in the Associated Press and the Wall Street Journal, now confirmed by U.S. military officials, the removal of U.S. troops from northeastern Syria has already begun, even though, just days ago, top officials had stated that the withdrawal had “no timetable” and was not guaranteed to occur if certain conditions were not met.

As MintPress reported earlier this week, Bolton announced on Sunday that President Donald Trump’s call to withdraw U.S. troops from Syria would now be “coordinated” with Israel and that there was no timetable for the drawdown — despite Trump’s recent claims that it would be “immediate.” Bolton also stated that the withdrawal of U.S. troops was conditional, based on guarantees from Turkey — conditions that several analysts noted appeared to be set up in order to prevent the removal of U.S. troops and maintain the U.S. occupation of more than 30 percent of Syrian territory indefinitely.

This analysis was supported by the fact that Bolton’s statement regarding conditions for the withdrawal so enraged the Turkish government that Turkish President Recep Tayyip Erdoğan snubbed Bolton while he was in Ankara on official business. Turkey continued to exact revengeon Bolton for his statements by promising to coordinate with Iran and Russia in the event of a U.S. exit from Syria.

Pompeo, during a speech delivered on Thursday in Cairo, stated that the U.S. will still carry out airstrikes in Syria as the need arises, and will not fully abandon the region until having achieved the “complete dismantling of the ISIS threat.” He also claimed that Trump would take military action in Syria again, if the need arose. Notably, last week it was reported that the State Department — which is headed by Pompeo — had developed a plan to partition the U.S.-occupied area of Syria into areas of influence. The partition of Syria is a long-standing objective of both the U.S. and its regional ally, Israel.

The Trump administration launched missile strikes on the Syrian government in April of last year and in April 2017, and the U.S.-backed coalition in Syria has launched innumerable airstrikes that ostensibly target the terror group Daesh (ISIS) but have been accused of also targeting civilians and military installments of the Syrian military and pro-Syrian militias.

While many of those who supported Trump’s promise to remove U.S. troops from Syria are pleased by the administration’s latest about-face, some of the Syrian government’s allies are not so convinced that the troop withdrawal will go forward as is currently being reported. On Friday, a spokeswoman for the Russian Foreign Ministry, Maria Zakharova, stated that the U.S. government “is looking for a reason to stay” in Syria for the long-term, adding that “I cannot share your confidence that they are leaving there because we never saw an official strategy.”

Zakharova’s sentiments are also shared by Russian Foreign Minister Sergey Lavrov, who made a similar statement on Friday. At the time of this article’s publication, the Syrian government had yet to comment on reports that the U.S. troop withdrawal had begun.

Russia’s cautious tone is unsurprising given the dramatic shifts in the Trump administration’s current Syria policy, which over much of the past year has waffled between complete troop withdrawal and the indefinite occupation of Syrian territory. Indeed it appears that reports regarding the beginnings of the drawdown may be overblown, given that the AP report on the removal of U.S. military assets and personnel from northeastern Syria stated that only “10 armored vehicles, in addition to some trucks, pulled out from Syria’s northeastern town of Rmeilan into Iraq.” The U.S. troop presence in Syria is officially listed as around 2,000, though the actual figure is believed to be between 4,000 and 5,000, when counting military contractors.

Furthermore, the U.S. military official — Colonel Sean Ryan — who confirmed the movement of military assets from Syria to Iraq, stated that the U.S. “will not discuss specific timelines, locations or troop movements,” suggesting that Bolton’s claim earlier this week that there was no timetable for the drawdown could well remain true.

Another reason for caution is the fact that, just days after reports that Trump’s previous attempts last April to begin withdrawing from Syria, a false-flag chemical weapons attack was promptly blamed on the Syrian government despite a lack of evidence, which ultimately resulted in Trump – and his counterparts in the U.K. and France – launching 105 missiles into Syrian territory.

As was correctly noted at the time, feigning military withdrawal before pushing for greater conflict and military intervention is an established U.S. tactic and was detailed at length in the influential 2009 policy paper “Which Path to Persia? Options for a New American Strategy Toward Iran.” That document was published by the influential pro-intervention, neo-conservative Brookings Institution and focused on destabilizing Iran and its regional allies, including Syria.

Given Pompeo’s recent statement that Trump would consider military action in Syria again in the future, it is worth considering that this minimal withdrawal of U.S. troops from Syria to nearby Iraq may have some ulterior motive.

Another notable development is that, just hours after the beginning of the troop withdrawal was reported, the continuation of that process could already find itself in jeopardy. Indeed, on Friday, Turkish media outlet Anadolu reported that Turkey has now amassed tanks along its border with Syria, particularly along the Al Qaeda-dominated Idlib province, and that the country’s defense minister, Hulusi Akar, had stated that Turkey’s preparations to invade U.S./Kurdish-occupied areas of Syria “continues intensely.”

The report resulted in a swift drop in value of the Turkish Lira, owing to concerns that Akar’s recent statements, coupled with the deployment of tanks to the Turkish-Syrian border, heralded an imminent military escalation in the Syrian conflict. The threat of a Turkish invasion of the portion of Syria occupied by the Kurds and the U.S. military has loomed for months and was a major motivating factor behind Trump’s decision to announce the withdrawal of U.S. troops in the first place.

Notably, Bolton’s newly imposed condition, on which the withdrawal of U.S. troops allegedly hinges, stipulates that U.S. forces would not leave Syria until Turkey guarantees the safety of the U.S.-backed Kurdish militias that Turkey considers to be terrorist organizations linked to the Kurdistan Workers’ Party, or PKK.

With Turkey poised to escalate the situation after only ten armored vehicles were moved from Syria to Iraq by the U.S. — hardly a meaningful drawdown in practical terms — it seems that conditions have been created that would result in the U.S. calling off its troop withdrawal were Turkey to move forward with its invasion plans, as seems likely to be the case.

0 thoughts on “Five Days after Bolton’s Reversal, US Syrian Troop Withdrawal Sort of Back On”