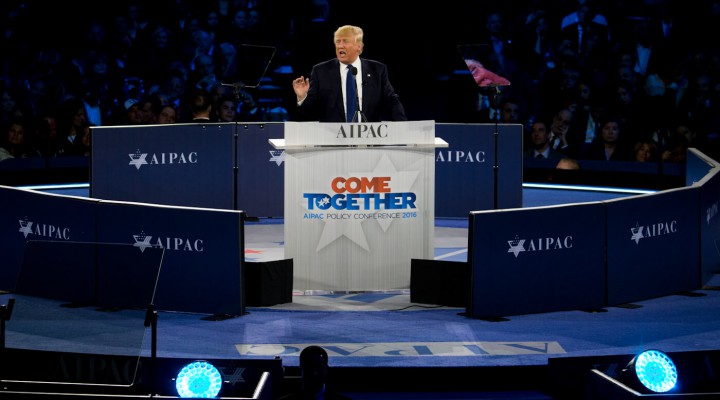 MPN- AIPAC – apparently impervious to irony – has used Omar’s comments and cautions about the problematic role of lobbyists in U.S. politics as a rallying cry to raise even more funds to further influence the political process on Capitol Hill.

The well-known pro-Israel lobby in the United States, the American Israel Public Affairs Committee (AIPAC), has launched a fundraiser based on recent comments made by Rep. Ilhan Omar (D-MN) that criticized the influence of AIPAC on using lobbyist funds to generate support for pro-Israel policies in Congress.

AIPAC, along with many other pro-Israel voices in American politics, had characterized Omar’s comments stating that groups like AIPAC use money to influence Congress as “anti-Semitic.” Yet now AIPAC – apparently impervious to irony – has used Omar’s comments as a rallying cry to raise even more funds to further influence the political process on Capitol Hill.

An AIPAC fundraising letter, sent out on Tuesday and subsequently circulated on social media, stated that Omar’s comments had “invoked old anti-Semitic stereotypes with tweets suggesting that the U.S. government supports Israel only because of Jewish money. She also said that AIPAC pays politicians to be pro-Israel.” 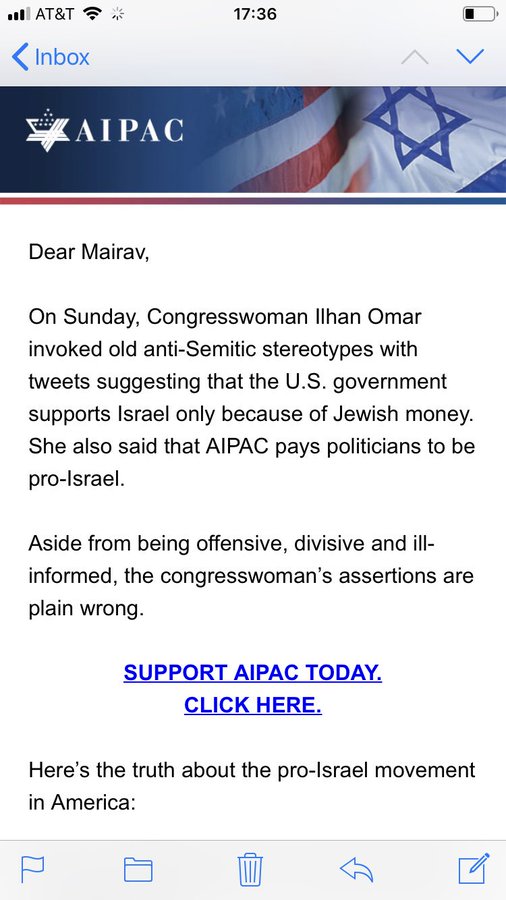 Immediately after stating that the “congresswoman’s assertions are plain wrong,” AIPAC urged its readers to “support AIPAC today” in order to further “bipartisan efforts in support of the shared values” between Israel and the U.S., asking for a donation of $25, $50, $100 or more.

Omar’s tweets that originally sparked the controversy never used the term “Jewish money,” despite AIPAC’s suggestion that she did, an inaccurate portrayal of her statements that was widely circulated by mainstream media outlets. Instead, Omar asserted in two tweets that AIPAC, a lobby group, used money to influence Republican politicians to back pro-Israel policies in U.S. Congress.

After her comments were pounced upon by numerous Democratic and Republican congressmen, as well as other Israel lobby groups like the American Jewish Committee, Omar issued an apology late Monday. In a statement shared on Twitter, Omar stated that she was “grateful for Jewish allies and colleagues who are educating me on the painful history of anti-Semitic tropes” and then “unequivocally apologized” for any offense her tweets had caused. However, she also reaffirmed “the problematic role of lobbyists in our politics, whether it be AIPAC, the NRA or the fossil fuel industry.” Many of those who had attacked Omar’s previous tweets for being “anti-Semitic” rejected her apology, with President Donald Trump even chiming in, calling it “lame” and asking for Omar to resign.

Omar is just the latest prominent American to be attacked for criticism of the Israeli government and its influence over U.S. politics. Other prominent Americans that have been targeted by the Israel lobby in recent months have also largely been people of color, such as Marc Lamont Hill, Angela Davis, and Michelle Alexander. Now Ilhan Omar joins them.

In December, Marc Lamont Hill gave a speech at the UN marking the International Day of Solidarity with Palestine where his concluding call for “a free Palestine from the river to the sea” was attacked by Israel lobby groups as “anti-Semitic.” The concerted effort to punish Hill for his speech at the UN led to Hill being fired from CNN and investigated by his other employer, Temple University.

Then, in early January, the Israel lobby persuaded the Birmingham Civil Rights Institute to rescind an award it had given to the well-known civil rights defender Angela Davis due to her support for the nonviolent movement supporting Palestinian human rights, Boycott, Divest and Sanctions (BDS). The decision, which was made after pressure from Israel lobby groups, lacked popular support and created a major backlash, which led the Institute’s chair, vice-chair and secretary to resign within days of rescinding the award. The Institute subsequently voted to reaffirm Davis as the award’s recipient.

After Alexander was ferociously attacked for the content of her opinion piece, Ali Abunimah, co-founder of the Electronic Intifada, wrote on Twitter that prominent Israel lobby groups were working “to intimidate and bully Black intellectuals and activists into silence over Israel’s horrific crimes against Palestinians.”

After its vicious attacks on @marclamonthill and Angela Davis, the Israeli apartheid lobby comes for New Jim Crow author Michelle Alexander. The goal: to intimidate and bully Black intellectuals and activists into silence over Israel’s horrific crimes against Palestinians. https://twitter.com/AJCGlobal/status/1086782340003594240 …

MLK’s memory is not a moral cudgel to wield against any cause or country you disapprove of. Michelle Alexander’s op-ed is a shameful appropriation. We all have a long way to go to reach the mountaintop. There’s no need to take potshots at democratic Israel https://www.nytimes.com/2019/01/19/opinion/sunday/martin-luther-king-palestine-israel.html …

739 people are talking about this
Now, Rep. Ilhan Omar — a Somali-American immigrant who also openly supports BDS — is the latest woman of color to be subjected to fierce attack from the very same groups that recently have smeared and attacked other prominent African-American activists like Alexander, Davis and Hill.

The fact that groups such as AIPAC are now using such attacks as a fundraising opportunity not only shows that Omar’s concerns about the Israel lobby’s influence were well-founded but that these groups have also weaponized such controversies to manufacture consent for measures in Congress that would essentially outlaw BDS by conflating growing support for BDS with a rise in “anti-Semitism.”

0 thoughts on “Criticism of Israel Lobby to Raise Funds”