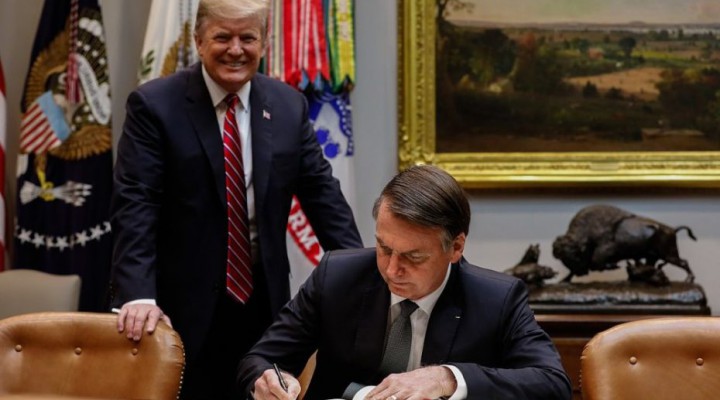 Trump’s disdain for international cooperation and science resulted in several factors that led to an unforeseen epidemic blossoming in Wuhan, China to transform into a global and extremely deadly and disruptive pandemic.

Throughout the world in countries that elected right-wing anti-government libertarian leaders – from the United States and Brazil to the United Kingdom and Australia – incompetence and lack of preparedness for the Covid-19 pandemic will directly lead to hundreds of thousands of needless deaths. The political rhetoric of those leaders who practice “barbarian laissez-faire” policies have been exposed by Covid-19 as worthless pablum designed to enthrall their unthinking supporters.

Donald Trump’s penchant for believing in conspiracy theories and his blatant xenophobia and racism clouded his judgement on the outbreak of Cobid-19 as a “Chinese” problem. Trump and his fellow right-wing allies around the world pushed back against a need for mandatory stay-at-home orders, quarantines, and social distancing.

Trump’s disdain for international cooperation and science, as well as his “America First” dogma, resulted in several factors that led to an unforeseen epidemic blossoming in Wuhan, China to transform into a global and extremely deadly and disruptive pandemic. The Trump administration was criminally derelict in abandoning several units and programs initiated by past administrations to combat a global pandemic. These include the National Security Council’s Directorate for Global Health Security and Biodefense; the Department of Homeland Security’s National Infrastructure Simulation and Analysis Center (NISAC), which conducted modeling as recommended by the 2006 National Strategy for Pandemic Implementation Plan; and the federal government’s PREDICT program that worked with 60 worldwide laboratories, including that in outbreak city Wuhan – which originally identified SARS-CoV-2, the novel Covid-19 – and 1,200 other viruses.

Pandemics on the scale of Covid-19 are believed by many to have wiped out or contributed to the downfall of entire civilizations, the Olmec, Mayan, Aztec, and Byzantine empires, as well as the Athens hegemon.

Like the “beast demons” of ancient mythology, Trump, Brazilian President Jair Bolsonaro, Philippines President Rodrigo Duterte, and, to a somewhat lesser extent, British Prime Minister Boris Johnson, treated Covid-19 as an opportunity to conduct anti-democratic power grabs, infringe on the powers of constituent political provinces, states, or regions to set their own public health requirements, and carry out frontal assaults on the independent press. In the case of Trump, there were blatant directives by him and his Eurasian Jewish criminal syndicate-linked son-in-law, Jared Kushner, that were intended to corner the market on critical medical equipment and supplies in order to distribute them to pro-Trump U.S. state governors and Israel.

Acting under similar orders, Israel’s Mossad and the U.S. Central Intelligence Agency began scouring the world to obtain ventilators, virus test kits, and personal protective equipment by whatever means possible, including theft and piracy. “Ha’aretz” reported that the head of Mossad’s technology division, someone identified only by the letter “H,” boasted about how Mossad obtained some of Israel’s ventilators from abroad, saying, “We stole, but only a little.”

“The Washington Post” reported that Israel was obtaining ventilators from North America, where they were already in short supply. After the publication of the “Post’s” report, Kushner announced to the world at a White House press briefing that America’s strategic reserve of ventilators were “ours,” meaning the Trump administration’s, and not for use by the states. The Mossad’s operation, directed by Israel’s criminally-indicted Prime Minister Binyamin Netanyahu, to obtain ventilators from abroad through bidding wars and outright theft, is all-the-more noteworthy when considering that Netanyahu is a longtime personal friend of Kushner and his family.

Trump and Bolsonaro were responsible for Covid-19’s spread to both Florida and Brazil when the two met at a mid-March summit at Trump’s coronavirus hot zone of Mar-a-Lago in Palm Beach, Florida. The summit and social gatherings resulted in members of Bolsonaro’s delegation and the Republican mayor of Miami becoming infected. Bolsonaro, in rejecting Covid-19 as nothing more than a “cold,” matched up with the propaganda coming out of Trump’s media circle in the United States. Both Bolsonaro and Trump insisted that regular influenza killed more people than Covid-19. Early on, Trump called Covid-19 a “hoax” by the Democratic Party. Attempts by White House spin doctors to backtrack on Trump’s statement largely fell on deaf ears.

As the virus spread throughout Brazil, Bolsonaro’s antics wore thin with state governors, his own health minister, and, most importantly of all, the Brazilian armed forces. Just as Trump engaged in personal insults directed against the Democratic governors of Michigan, Washington, and other states, Bolsonaro began attacking Governors João Doria of São Paulo and Wilson Witzel of Rio de Janeiro for instituting curfews and quarantine measures. The Brazilian people sided with their governors against Bolsonaro, just as Americans sided in large numbers with their governors and mayors against Trump.

After Bolsonaro contradicted Health Minister Luiz Henrique Mandetta by scoffing at the need for social distancing and promoting quack medicinal cures, Facebook and Instagram removed the Brazilian president’s posts as harmful to the public. In cities throughout Brazil, angry citizens took to their balconies banging pots and pans and shouted “Bolsonaro Out!” There were calls by the opposition in the Brazilian Congress to impeach Bolsonaro. Economics Minister Paulo Guedes took issue with Bolsonaro’s desire to send Brazilians back to work prior to the virus’s abatement.

After Trump tweeted that quarantines and stay-at-home orders could not be “cures” worse than the disease, Bolsonaro, in an example of “monkey see, monkey do,” echoed Trump by declaring, “The collateral effects of the measures to combat the coronavirus must not be worse than the disease itself.”

As Bolsonaro found himself in political hot water, Trump also began promoting the use of the anti-malarial drug hydroxychloroquine, which remained untested for treating Covid-19. Bolsonaro also chimed in with a tweet extolling the use of the same drug. It was one of Bolsonaro’s tweets that Twitter removed.

The Argentine press began reporting that the Chief of Staff of the Brazilian Presidency, Army General Walter Braga Netto, had actually replaced Bolsonaro as “operational president” of the country. There were reports that the Brazilian armed forces chief of staff had informed his Argentine counterpart that it was General Netto, not Bolsonaro, who was making all the presidential decisions regarding Covid-19 and other critical matters in Brazil.

Since Bolsonaro and Trump like to match each other’s policies and rhetoric, the intervention of the Brazilian armed forces in sidelining Bolsonaro served as a stark warning to Trump, especially after Trump ordered the firing of Navy Captain Brett Crozier, the Commanding Officer of the nuclear aircraft carrier “USS Theodore Roosevelt.” The ship’s commander had fired off an angry letter through his chain-of-command warning that his crew of over 4000 sailors was in jeopardy from an outbreak of Covid-19 on board the vessel. Crozier had plenty of supporters in the military and political establishment, including his own crew and presumptive Democratic presidential candidate Joe Biden, as well as the great grandson of President Theodore Roosevelt. The examples of General Netto and an angry U.S. Armed Forces provided uninformed and ignorant libertarian “beast-men” like Bolsonaro and Trump with a stern wake-up call that their clownish antics have definite limits.

Other “beast-men” like Duterte and Johnson also used the coronavirus to brandish their particular political theatrics. Duterte ordered Philippines security forces to “shoot dead” anyone violating mandatory curfews and social distancing in the country. Johnson, a Brexit “one-trick pony,” found himself incapable of adequately dealing with Covid-19, especially after years of decrying Britain’s valued National Health Service as an unnecessary bureaucracy. Johnson’s ignorance of the virus and his reliance on political adviser Dominic Cumming’s ridiculous advice to take a chance on Britons developing a “herd immunity,” thus allowing the virus to make an initial sweep through Britain and count the dead and the survivors afterward, resulted in not only Johnson, but his pregnant fiancée, Carrie Symonds; Prince Charles; and Cummings contracting Covid-19. Australia’s evangelical Prime Minister Scott Morrison was also slow on the draw in taking resolute action to combat Covid-19, perhaps putting his faith more into his vaunted religious passages than scientific research. Critics of Morrison’s right-wing government pointed out that it was not only toilet paper that was in short supply in the country, but also honesty, truth, and transparency.

Rejection of science, public health, and common sense, as well as using a pandemic to score political points and increase personal power, has its penalties, a fact that has not yet seemed to dawn on Trump, Bolsonaro, Johnson, and like-minded political dolts around the world.

One thought on “Libertarian Leaders: a Recipe for Lethal Government Incompetence and Criminality”