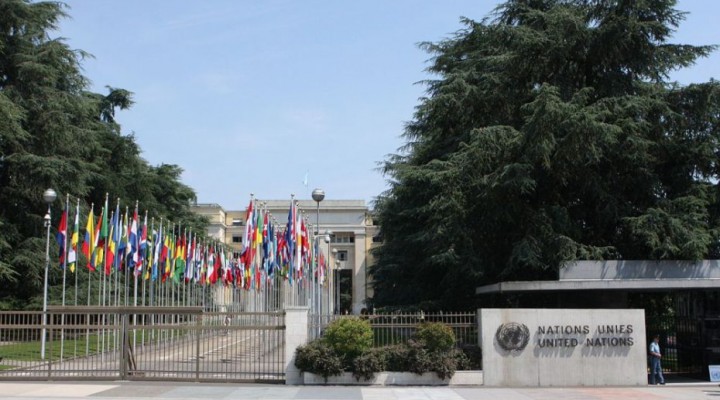 With a dangerous administration in power in Washington, one that rejects internationalism and consensus-building, it is past time for the United Nations to move its headquarters and member states’ permanent missions to a more neutral location.

With a dangerous right-wing and quasi-fascist administration in power in Washington, one that rejects internationalism and consensus-building, it is past time for the United Nations to move its headquarters and member states’ permanent missions to a more neutral location. One can understand why the UN was originally located in New York. The Rockefeller family donated the land on Turtle Bay on the East River for the construction of UN Headquarters. After World War II, the United States was in a prime position to nurture the UN, something it failed to do after World War I when Washington rejected membership in the League of Nations.

The League’s headquarters in Geneva was a painful reminder to some UN members who saw the world’s first international organization devoted to peacemaking fail miserably to contain Nazi Germany, Fascist Italy, and Imperial Japan. In some respects, although the UN was the successor organization to the League, no one wanted to be reminded that it was at the League’s headquarters in Switzerland where Ethiopian Emperor Haile Selassie pleaded with delegates to stop the brutal Italian invasion and occupation of his country.

The charter members of the UN wanted no reminders of the UN’s toothless predecessor. The UN was an organization with a Security Council of five permanent members that was authorized to meet aggression with force. Unfortunately, the UN’s host nation, particularly under Donald Trump, but also to a lesser extend under Ronald Reagan, George H.W. Bush, and George W. Bush, has shown its willingness to disregard decisions of the UN and violate the US-UN Treaty governing the rights of delegates to freely enter and depart New York while conducting business at the UN.

The US-UN treaty, which may not be violated by Trump without the approval of Congress, was signed at Lake Success, New York in 1947. The signatories were UN Secretary General Trygve Lie and US Secretary of State George Marshall. The treaty guaranteed the extraterritorial nature of the UN headquarters in Manhattan. Furthermore, it guaranteed that the US would not interfere with the expeditious granting of US visas to foreign diplomats and UN personnel transiting through US territory in furtherance of their responsibilities to their own governments and the UN, respectively.

Trump’s xenophobic and far-right policies directed against Muslims, Palestinians, and countries, including Cuba, Nicaragua, Iran, and Venezuela, have resulted in repeated violations of the US-UN Treaty by zealous US immigration authorities. The recent Trump administration threat to deny visas to Iran’s delegation to attend the 2019 General Assembly Plenary Session in New York is a case in point, but not the only one. Similar restrictions by the Trump administration have been levied against delegates from UN members Libya, Cuba, Russia, Venezuela, and Nicaragua. Official observers from Palestine have also been harassed and delegates from the Houthi-led government of Yemen and Abkhazia, non-UN members, have been denied US visas to plead their cases before the UN.

The US-UN Treaty stipulates that the US government will facilitate entrance into the United States, and the use of available means of transportation, of “persons coming from abroad who wish to visit the headquarters.” This would include members of non-member nations wishing to petition or otherwise interact with the UN and affiliate agencies on an official basis. In fact, the US violated this provision in 1975 when US Secretary of State Henry Kissinger saw to it that US visas were denied to representatives of the Kingdom of Sikkim, Western Sahara, and East Timor, who desired to plead their nations’ cases with regard to invasions and occupations by India, Morocco, and Indonesia, respectively. East Timor was eventually admitted to the UN as a member state, but it was after a bloody war with Indonesian occupation forces and US collusion with Indonesia’s military dictatorship.

US policy toward a liberalized visa policy for UN members, employees, observers, and guests has been erratic since the UN’s founding. In 1968, the Lyndon Johnson administration did grant a visa to Commissioner for Foreign Affairs of the secessionist Republic of Biafra Matthew Mbu to visit the UN to plead his nation’s case to UN officials. In 1948, the Harry Truman administration denied visas for two representatives of Indian princely state leaders – the Muslim Nizam of Hyderabad and the Sikh Maharajah of Nabha – to appeal to the UN against aggression by the Hindu-dominated newly-independent nation of India. That same year, the Truman administration failed to permit representatives of the Kalat Confederacy in Baluchistan to appeal to the UN against Pakistani annexation.

The original founders of the UN even envisaged a UN-controlled airport near the UN Headquarters that would deny US immigration authorities the right to deny visas to UN delegates and other guests visiting the UN. Such an airport would have enjoyed extraterritorial status with unhindered travel corridors to and from the UN.

While he was Venezuela’s Foreign Minister, Venezuela’s President, Nicolas Maduro, was subjected to an invasive strip search in 2006 when he was detained for 90 minutes at New York’s JFK Airport while returning home from a UN General Assembly meeting. The detention of Maduro was a CIA-initiated fishing expedition. Maduro was questioned about his alleged role in the failed 1992 Venezuelan coup attempt led by Venezuelan President Hugo Chavez.

Although the League of Nations lacked any real enforcement authority to back up its resolutions, the host nation of Switzerland did yeoman’s work in facilitating the entry to the Geneva headquarters by official parties and guests. The US record on affording equal access to the UN in New York has been woefully inadequate. The UN could very easily move its headquarters to Geneva, where several UN constituent bodies and specialized agencies, including the UN Human Rights Council, World Health Organization, the International Labor Organization, the UN High Commissioner for Human Rights, the UN High Commissioner for Refugees, UN Conference on Trade and Development (UNCTAD), World Meteorological Organization (which is immune to Donald Trump’s redrawing of weather maps with black Sharpie pens), and the International Telecommunications Union are located.

Since Switzerland’s traditional foreign policy is one of neutrality, it is a much better choice to host the UN than New York. Trump’s recently fired National Security Adviser, John Bolton, who was also a past US ambassador to the UN, once fantasized about the top ten floors of the UN Secretariat building being demolished. Trump’s personal attorney, former New York Mayor Rudolph Giuliani, routinely used the New York Police Department to harass UN delegates from countries he did not like. Delegates and staff from Russia, Belarus, North Korea, Laos, Iraq, Ivory Coast, Indonesia, Mexico, Egypt, Kazakhstan, China, Cuba, Cyprus, Zaire, and other countries were routinely issued parking tickets and had their vehicles towed. Russian diplomat Alexandre Zmeevski stated that “his delegation had been given tickets even in some parking spaces reserved for diplomatic vehicles.” Costa Rica delegate Emilia Castro de Barish complained that she “had received two unfair and discriminatory parking citations, including a citation while she had been parked in a parking space reserved for diplomats.” In 1995, Giuliani ordered Palestinian leader Yasir Arafat, in the city to help celebrate the UN’s 50th anniversary, ejected from a New York Philharmonic special concert for the gathered world leaders. Giuliani stated that if the UN did not like his harassment of its employees and diplomats, they could “leave town.”

It was not the first time that a right-wing Republican and extremist Israel supporter told the UN to leave New York. Alternate US delegate Charles Lichtenstein addressed a diplomatic standoff with the Soviet Union in 1983, when the states of New York and New Jersey barred Soviet Foreign Minister Andrei Gromyko’s plane from landing at either JFK Airport in New York or Newark International Airport in New Jersey. The alternative of McGuire Air Force Base in New Jersey was offered. However, the Soviet government rejected the offer as a violation of US treaty rights afforded to the UN. Lichtenstein responded by saying that if member states believed that “they are not being treated with the hostly consideration that is their due, they should consider removing themselves and this organization from the soil of the United States,” adding, “we will put no impediment in your way. The members of the US mission to the United Nations will be down at the dockside waving you a fond farewell as you sail off into the sunset.”

It’s time to honor the requests of Giuliani and Lichtenstein and move the UN from New York to Geneva or another location not subject to the whims of right-wing fanatic blowhards like Trump, Giuliani, Bolton, or the late Mr. Lichtenstein.

The UN Must Totally Break from US Administrative Control