HOME / WORLD / A Progressive Surge Is Brewing Across Latin America 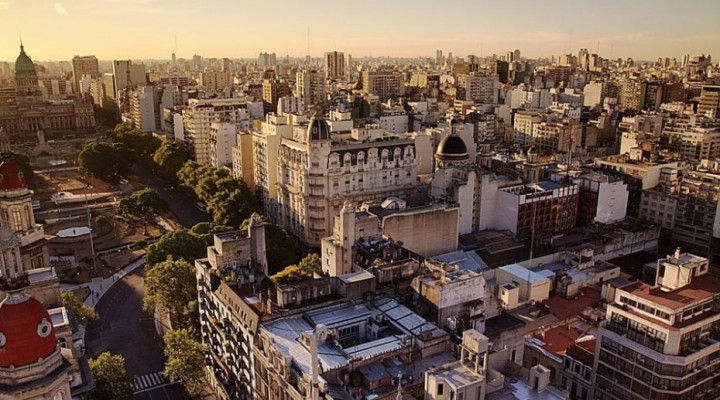 The news from Buenos Aires, La Paz, Bogota, and Montevideo suggests that the region’s right-wingers can put away their champagne bottles.

A year ago, the corporatists and anti-socialist militarists in the Donald Trump administration appeared ecstatic over the electoral successes of neo-fascism in Latin America. Jair Bolsonaro, a self-proclaimed admirer of Adolf Hitler and who is nicknamed the “Trump of the Tropics,” sat in the presidential palace in Brazil; billionaire right-winger Sebastian Pinera had, once again, become president of Chile; and Lenin Moreno, the one-time leftist and progressive ally of former Ecuadorian president Rafael Correa, had invited the US military back into his country and made common cause with the Lima Group, an anti-Nicolas Maduro bloc subservient to Washington.

Although there are attempts by the right-wing in Latin America and the United States to turn Bolivian progressive president Evo Morales into a Hugo Chavez or Nicolas Maduro, and thus, worthy of sanctions on him and his government, there are clear indications that Morales won the election for his fourth term in receiving 47.07% to 36.51% for former President Carlos Mesa in the first round of the presidential election held on October 19th and 20th. Morales’s 10.56 edge over Mesa gave him a 10 percent lead with over 40 percent of the vote, the threshold necessary to be declared winner of the first round.

Although the usual suspects in the Organization of American States (OAS) and European Union, reinforced by right-wing US senator Marco Rubio of Florida – Washington’s main lobbyist for all of Latin America’s oligarchs and narcotics lords – demanded a second-round election, Morales and his Movement for Socialism party was confident of their victory to agree an OAS audit of the vote tally. However, Mexico’s government warned the OAS not to interfere in the Bolivian election. Since the advent of the Trump administration, the OAS has become more vocal against progressive governments in Venezuela, Cuba and Nicaragua, all of which have been hit with crippling US economic and travel sanctions.

The Trump administration and its right-wing allies in the OAS and the governments of Argentina, Brazil, and Colombia cried foul and demanded a second-round vote. Those questioning Morales’s victory are the same corporatist quarters that propelled Bolsonaro, Pinera, and Argentine president Mauricio Macri into power. Morales’s traditional political enemies in provinces like Beni and Santa Cruz, hit the streets with protests. It is well-known that the Bolsonaro government in Brazil has provided political and financial support to Morales’s right-wing opposition, the Civic Community alliance.

Rather than rely on military coups to overthrow popularly-elected progressive governments – a tactic long used by the Central Intelligence Agency in the Western hemisphere – the new architects of “regime change” in Langley, Virginia have discovered “lawfare,” the use of corrupt judges and prosecutors, to bring falsified criminal charges of corruption against leaders opposed by Washington.

In Brazil, lawfare was used to justify the impeachment and removal from office of progressive President Dilma Rousseff and the imprisonment on a cooked-up bribery conviction of her progressive predecessor, Luiz Inácio Lula da Silva. Lula’s imprisonment and ineligibility to run for president in 2018 opened the door for the victory of Bolsonaro in the presidential election. The selection by Bolsonaro of Sergio Moro as his justice minister exposed the entire corruption that is inherent with Moro and Brazil’s far-right. Moro was the federal prosecutor who waged lawfare actions against Lula and Rousseff in charging them with involvement in the “Operation Car Wash” bribery scandal involving the Brazilian construction company, Odebrecht SA. It is more than apparent that Car Wash was a lawfare tactic developed by the CIA to overturn progressive leaders in Latin America.

A ruling by Brazil’s Federal Supreme Court in November of this year could overturn Lula’s conviction. If that occurs, Lula will be free to challenge Bolsonaro in the 2022 presidential election. Bolsonaro, who plans to run for re-election, has been trying, along with Moro, to unconstitutionally and illegally influence the Supreme Court decision. Workers Party leaders Lula and Rousseff were not the only progressive leaders painted with the wide brush of the Car Wash probe. Others targeted include Chile’s former president, Michelle Bachelet and Argentina’s former president, Cristina Fernández de Kirchner.

The right-wing plot to tarnish Mrs. Kirchner with Car Wash was a complete failure. Although Macri, with the support of the administration of his old business partner, Trump, and the Bolsonaro regime, launched a propaganda campaign against Kirchner, her leftist Frente de Todos party scored a major win over Macri in the October 27 presidential election in Argentina. The victory of leftist presidential candidate Alberto Fernandez and his vice-presidential running mate, Cristina Fernández de Kirchner (no relation to the presidential candidate), sent a message to Latin America and Washington that the rightward tilt of the hemisphere was in check. In one of his first statements after his victory, Alberto Fernandez called on Brazil to release Lula from prison. A revitalized progressive left bloc emerged with Argentina’s President Fernandez and Mexico’s leftist President Andrés Manuel López Obrado as its cornerstones.

In Uruguay, the leftist Frente Amplio, which has ruled Uruguay for over 14 years, saw its presidential candidate, Daniel Martinez, with a plurality of the vote over his right-wing challenger, Luis Lacalle Pou. Since neither candidate achieved a 50 percent threshold, the election will go to a second round on November 24. Uruguayans have been alarmed by Pou’s willingness to reconstitute the country’s national security force. During past military rule, such a force was responsible for countless human rights violations.

The accusations in Chile against former President Bachelet came as her right-wing billionaire successor, Pinera, was coping with massive street protests that resulted in a state of emergency declaration. Pinera’s security forces killed 11 protesters. The heavy-handed response was reminiscent of the darkest days of military junta rule of dictator General Augusto Pinochet, someone who Pinera generally admires. The timing of the charges against Bachelet was extremely suspicious and appeared to undermine Bachelet’s position as the head of the United Nations Commission on Human Rights and her condemnation of the human rights abuses by Pinera’s government.

The protests in Chile were mirrored by those in Ecuador, where President Moreno, who was named Lenin because of his father’s great admiration for Vladimir Lenin, had decided to break with the socialist policies of his predecessor, Correa, but had instituted crippling austerity measures, including slashing fuel subsidies, which were all designed to placate the International Monetary Fund and foreign creditors. The protests against Moreno were so intense, the government was forced to temporarily relocate government functions from Quito, the capital, to Guayaquil amid a declaration of a state of emergency. Meanwhile, the faltering Moreno regime continues its attempts to have former President Correa extradited from Belgium, where he has political asylum. As Moreno’s hold on power became shakier, his regime grew closer to the US military while Moreno began making wild accusations about Correa “spying” on him from Belgium.

Another US puppet, President Juan Orlando Hernandez of Honduras, was faced with massive labor and student protests after his younger brother, Tony Hernandez , was convicted of drug trafficking charges by a US federal court in New York. During the trial, several witnesses linked the Honduran president to his brother’s drug trafficking cartel. The US has ensured that CIA-approved puppets like Hernandez have maintained political control of Honduras ever since a CIA-backed coup toppled progressive president Manuel Zelaya in 2009. Evidence presented during the trial implicated not only President Hernandez, but also his predecessor, Porfirio Lobo, who was installed after the 2009 CIA coup against Zelaya. Former President Zelaya and supporters of his leftist LIBRE party were among several protesters on the streets of Tegucigalpa calling for Hernandez’s resignation.

Protests also swept Haiti, with demonstrators calling for the corrupt president, Jovenel Moise, to step down. As with Honduras, Haiti has been subjected to repeated CIA-backed coups, with two directed against former President Jean-Bertrand Aristide.

Recent local elections in Colombia, governed by the far-right President Ivan Duque, were marred by the assassination of one of several leaders of the de-mobilized FARC leftist guerilla movement. The latest victim was Alexander Parra. Although a peace agreement was negotiated between the FARC and Duque’s more centrist predecessor, Juan Manuel Santos, the recipient of the 2016 Nobel Peace Prize, Duque and his narco-trafficker ally, former President Alvaro Uribe, have done their best to scuttle the FARC peace deal by assassinating its leaders.

Election results from throughout Colombia were devastating for Duque; his political godfather, Uribe; and Uribistas tied to right-wing paramilitary groups and drug cartels. In Medellin, an Uribista stronghold, Daniel Quintero, an opponent of Duque and Urbe, was elected mayor. Reformist mayors also won mayor’s races in Bogota, which saw its first female mayor, Claudia Lopez, elected on the Green Alliance ticket. A progressive party, Fuerza Ciudadana, won the governorship in the right-wing paramilitary stronghold of Magdalena province.

Trump and his fellow neo-fascists in Brazil, Argentina, Chile, Honduras, and Colombia were hoping for a right-wing tide to continue to sweep through the Western Hemisphere. The news from Buenos Aires, La Paz, Bogota, and Montevideo suggests that the region’s right-wingers can put away their champagne bottles.

0 thoughts on “A Progressive Surge Is Brewing Across Latin America”