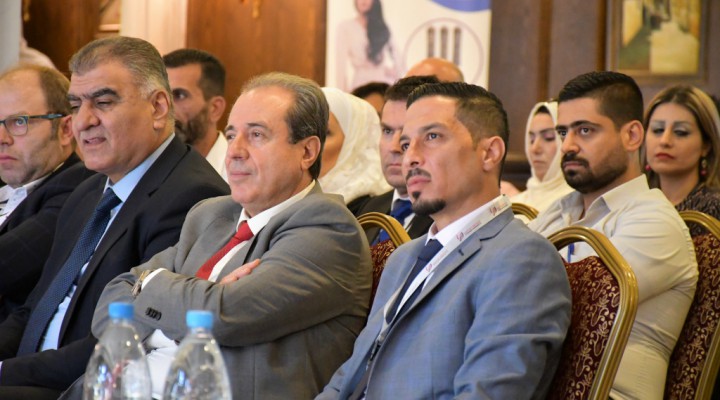 Two weeks ago, I attended a two day conference in Damascus, Syria. The initiative is the brainchild of Syrian businessman and entrepreneur, Dr. Hani Barakat who gathered together a selection of young and enterprising business people to discuss the obstacles facing the youth of Syria when they try to establish any kind of business initiative.

Their path to success has been harshly affected by the illegal US Coalition sanctions (and precedeing sanctions on Syria since 1979) and further impacted by the newly introduced and punitive Caesar Law – a barbaric turning of the economic screws by the US based upon a fraudulent report of “torture in Syrian prisons”.

During the two days, the logistical and bureaucratic hurdles were openly discussed. Criticism of the government and of elements within the trading sector were heard and constructively examined and analysed. At the end of the two days, the team headed by Dr Barakat put together a comprehensive summary of the issues raised and proposed solutions to fast-track small businesse start-ups.

Dr Barakat is intending to take the conference to every major city in Syria to compile issues by region and sector. The Aleppo contingent were present in Damascus and looking forward to the meeting in Aleppo which will follow in the next few months.

After the conference, I had the opportunity of a brief interview with Dr Barakat:

During Dr Barakat’s introductory speech, he made the following points also:

“It would be better to give everything away than to sell the country as some have done. If you can help this country, there should be no hesitation to do so. Victory in the economic field means safety and stability for everyone in the country.”

“You (the small business community) are our hope, you are the Syrian army against economic terrorism. The heroic Syrian Arab Army victory against military terrorism is our victory but it is also a victory for the whole world. We all owe a huge debt to the Syrian Arab Army whose holy blood was shed to defend Syria and her great people. You are a people with patience, dignity, honour and resistance. The whole world stood against you but you did not surrender. Now is not the time to surrender to fear and illusion sown by the fifth column especially on social media.”

Our commander, President Bashar Al Assad, drove the country to safety after the attacks on our people. We never abandoned the country during the darkest times, we will not do so now. We will fight the economic war with the same courage. This organisation pays for everything itself, there is no corruption, only ethics, morals and political science. People are fighting this initiative because I intend to combat corruption.

The main reason I began this initiative is to decrease the suffering of the Syrian people. I want to offer real job opportunities and to encourage activists and young people to establish their own small businesses. We are a candle in a very dark tunnel but there are people coming back from outside Syria to help rebuild. I want the next generation to look back and thank this generation for not abandoning this country in its hour of need. If the experiment works here in Damascus, we will travel to every other major city in Syria with the same concept.