HOME / WORLD / Nasrallah: Banned in the West but Mandatory Viewing in Israel 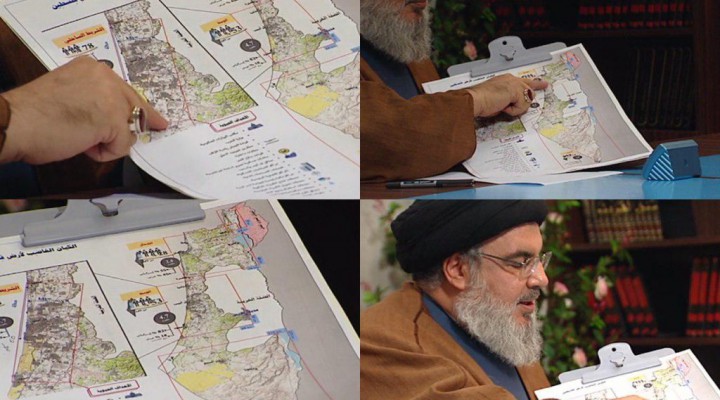 In his speech on the 13th anniversary of the defeat of the Israeli invasion of Lebanon in 2006, Hezbollah Secretary General Sayyed Hassan Nasrallah warned Tel Aviv of the consequences of its constant urging of war against Iran. The Zionist state would be swept up in any such war and would suffer “a terrible defeat”, he said.

In the upside-down world of western war propaganda, Nasrallah’s warning is portrayed as a ‘terrorist threat’, while Israel’s repeated attacks on Syria and constant urging of war against Iran are presented as self-defense. In this way, war in the entire Middle East region is normalized, for western audiences.

In an apparent paradox, Nasrallah’s voice of resistance is banned in many western countries. Facebook, for example, will automatically block any link to the Hezbollah news site, al Manar. However, in Israel Nasrallah’s words are carefully reported and studied.

There is a good reason for this. The USA and Britain, in particular, want to prohibit Nasrallah’s clear and insistent logic of resistance to the colony in Palestine; while Israel wants colonists to remain up to date on the latest detail from their northern nemesis.  Of course, Nasrallah’s speeches carry a fair degree of morale-building rhetoric, of his confidence in victory and so on. But he speaks with the unique credibility of a commander in chief, as well as that of a strategic analyst. When he speaks of inflicting damage on Israel, his southern neighbors know that Hezbollah has done that before, driving zionist forces out of Lebanon throughout the 1990s and again in 2006.

No other resistance commander speaks so plainly and in such detail. Iran’s legendary General Qasem Soleimani, for example, rarely makes any public statements.

This latest message led with the warning over the war against Iran, and specified the vulnerabilities of Israel. Showing a map of occupied Palestine, Nasrallah emphasized the capabilities of the Lebanese resistance and the close proximity of all Israel’s military, logistic and industrial facilities. Hezbollah now has tens of thousands of accurate missiles and its retaliation would focus on the north and on the north coast.

Zionist leaders, recognizing that Hezbollah is now well embedded in the Lebanese government, seem to have abandoned any attempt to distinguish the resistance party from Lebanon. On more than one occasion Minister Yisrael Katz has threatened to send Lebanon back “to the stone age”. This is part of Israel’s (obsessive but futile) campaign to remove Iranian presence from both Syria and Lebanon. In December 2017 Katz threatened “This time, all of Lebanon will be a target … we will return Lebanon to the Stone Age.” Nasrallah responded in kind. Al Manar’s summary of the long speech (‘Sayyed Nasrallah confident of victory: we will pray in al Quds!’, 16 July) emphasized the devastating impact of  Hezbollah’s retaliation against Israel.

Lebanon’s resistance forces are prepared for a counter-invasion of Galilee (northern Palestine) and would focus attacks on the coastal strip from Netanya to Ashdod, which included the main airport, arms depots, military facilities, petrochemical plants, power facilities and ports. Israel would suffer a “terrible defeat” and would be “on the verge of vanishing”. Nasrallah repeated his earlier statements about the weakness of Israeli ground forces. In other themes, Nasrallah said the Kushner plan for Palestine was doomed to failure, that with looming victory, Hezbollah had withdrawn many of its forces from Syria and, in Lebanon, the resistance backed internal de-escalation and stability.

The Zionist fear of Iran is logical. A bloc led by Tehran remains the main existential threat to Israeli expansion and apartheid.

In her report on the speech, Dr. Marwa Osman (‘Nasrallah’s surprises for Israel’, 21 July) pointed out that the resistance leader’s central message was a deterrence to the Netanyahu regime’s drive for war on Iran. The Zionist fear of Iran is logical. A bloc led by Tehran remains the main existential threat to Israeli expansion and apartheid.

Iran has told Washington that any attack on its territory will lead to counter attacks on US forces and proxies in the region. The Hezbollah leader has now made explicit the scope of the response of the Lebanese resistance, on multiple targets in occupied Palestine.

0 thoughts on “Nasrallah: Banned in the West but Mandatory Viewing in Israel”