HOME / Politics / The UNO destroyed by US «exceptionalism»

The UNO destroyed by US «exceptionalism» 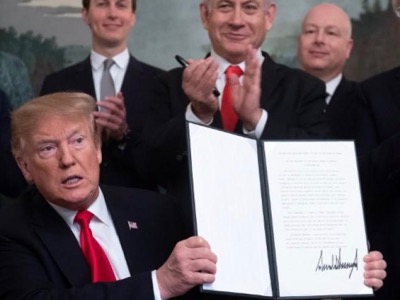 Now weakened in comparison with their Russian and Chinese competitors, the United States have returned to their historical reflexes. In terms of foreign relations, they have abandoned the liberal international order and returned to the doctrine of exceptionalism. By questioning their own engagement with the Security Council, they have opened the way to the deconstruction of international Law and the end of the United Nations. This evolution, which shocked the countries of Western Europe and plunged them into confusion, had been anticipated by Russia and China, who were preparing for it.

John Bolton, the ex-ambassador to the United Nations under President Bush Junior, and the present advisor on national security under President Trump, is opposed to one particular aspect of the United Nations. For him, it is out of the question for anyone to bring influence to bear on his country on any subject whatsoever. Consequently, the five powers which are the permanent members of the Security Council in New York form a world-wide directorate which defines the law of nations… but can not impose anything at all on the United States.

This opinion, « exceptionalism », has always been that of Washington, even if the rest of the world has not yet realised it. [1]. It has now reappeared in a very particular international context, and will shake up the world as we know it.

This US « exceptionalism » refers to the myth of the « Pilgrim Fathers » – a group of Puritans, persecuted in England, where they were seen as dangerous fanatics, and who first of all sought refuge in Holland, then in America, where they arrived on the Mayflower in 1620. They built a new society there, founded on the fear of God. It was « the first democratic nation », a « Light on the Hill », destined to uplift the world. The United States are therefore an « example » for others, and have a « mission » to convert the world to the Will of God.

Of course, the historical reality is very different from this tale, but that’s not what we’re talking about.

For two centuries, every President of the United States without exception has referred to this historical falsification.

they negotiate, sign and adopt treaties, always stipulating reservations in order to avoid applying them in internal law;

they consider that they follow the « Will of God » while their enemies refuse to do so, and therefore condemn them with greater severity for the same behaviour they allow themselves (the double standard);

they refuse any international jurisdiction which may apply to their internal affairs.

This attitude leads to misunderstanding, particularly since the Europeans, despite the fact that they make no effort to understand the characteristics of others, remain convinced that they are open-minded. Thus they believed that the US refusal to adopt the Paris Agreement on climate can be ascribed to the supposed obscurantism of President Trump. In reality, however, this has been Washington’s constant position. The Paris Agreement of 2015 was preceded by the Kyoto Protocol in 1997, which Washington also refused. Although they had a hand in writing it, the United States were determined not to adopt it because it imposed certain behaviour on their citizens. President Clinton attempted to negotiate reservations which the United Nations refused. He therefore signed the Protocol, which he sent to the Senate for ratification. The Senate – Republicans and Democrats – rejected it unanimously, which provided him with an argument for relaunching his negotiations. The refusal of any international legal disposition which applies to internal affairs does not mean that the United States reject the objective of the Kyoto Protocol and the Paris Agreement – reducing atmospheric pollution – nor that they are unwilling to apply dispositions in this sense, but only those which affect internal law.

In any case, exceptionalism implies that the United States are « a Nation like no other ». At home, they believe they are an example of democracy, but refuse to be the equals of anyone else, who, therefore, can under no circumstances consider them democratic. During the Cold War, the Allies chose to ignore this cultural characteristic, while their enemies took no notice. From the disappearance of the Soviet Union to the decline of the West, when the world was unipolar, this particularity was never mentioned. But today it is destroying the system of collective security.

Let’s note that two other states in the world have a doctrine close to that of US exceptionalism – Israël and Saudi Arabia.

Having described the context, we will now examine how the sovereignty of the Golan plateau has stirred up a hornets’ nest.

The United States and the Golan

After the Six-day War (1967) Israël occupied the Syrian Golan Heights. Resolution 242 of the Security Council « emphasising the inadmissibility of the acquisition of territory by war » ordered the « withdrawal of Israëli armed forces from territories occupied in the recent conflict » [2].

In 1981, the Knesset unilaterally decided to violate this resolution and to annex the Golan Heights. The Security Council responded by passing resolution 497, stating that « the Israëli decision to impose its laws, jurisdiction and administration in the occupied Syrian Golan Heights is null and void and without international legal effect » [3].

For 38 years, the United Nations were unable to apply these resolutions, but they remained indisputable and were still supported by the United States.

On 26 March 2019, the United States recognised Israëli sovereignty over occupied Golan, meaning the acquisition of territories by war [4]. By doing so, they recanted their 52-year-old vote in the Security Council concerning the Golan, and also the principles of the United Nations Charter [5] which, for 74 years, have governed the elaboration of international law.

The UNO will continue to exist for several years, but from this moment on, its resolutions will have only a relative value, since they are unable to force the obedience of those who adopted them. The process of deconstruction of international law has begun. We are entering a period governed by the survival of the fittest, as had been the case before the First World War and the creation of the League of Nations.

We already knew that the word of the United States only has relative value, even in the Security Council – since the bare-faced lies of Secretary of State Colin Powell, on 11 February 2003, concerning the alleged responsibility of Iraq in the attacks of 9/11, and the alleged Iraqi weapons of mass destruction which threatened the West. But this is the first time that the United States have recanted their vote in the Security Council.

Washington defended its decision by declaring that it was based on an observance of reality – the Golan has been occupied by Israël since 1967, and since 1981, has been administered by Israël as if it were Israël’s own territory. According to Washington, by virtue of the doctrine of US exceptionalism, this reality imposed by a God-fearing ally must take precedence over international law, as expressed by its dishonest partners.

Then Washington observed that giving back the Golan to Syria would send the wrong message, since in their eyes, Syria is no more than a criminal gang. However, it would be fair to gratify the excellent Israëli ally. Still according to this exceptionalist doctrine, the United States, this « Nation like no other », enjoys this right and assumes this mission.

After having dominated the world, the weakened United States now give up on the United Nations. In order to conserve their dominant position, they are retreating to the one part of the world that they still control. Until now, Russia and China had considered them, according to the image used by Sergueï Lavrov, as a ferocious but dying beast which we must benevolently escort towards its death, making sure that is doesn’t provoke a catastrophe on the way. But the United States ended their decline by electing Donald Trump, who, having lost the majority in the House of Representatives, allied himself with the US deep state (attested to by the nomination of Elliott Abrams [6] and the withdrawal of the accusation of collusion with the enemy brought by prosecutor Robert Mueller [7]) in order to remain in power.

In fact, we are not moving towards the creation of a third international institution, after the League of Nations and the United Nations Organisation, but towards a division of the world into two zones organised by distinct legal models – one under US domination, and the other composed of sovereign states around the « Greater Eurasian Partnership ». Unlike the Cold War, when it was difficult to cross the boundary between East and West in either direction, although the two blocks nevertheless accepted the single legal system of the United Nations, the new system should allow travel and commerce between one region and the other, but will have to be organised around two models of Law.

This was precisely the post-Western world announced by Russian Minister for Foreign Affairs Sergueï Lavrov on 28 September 2018, at the forum of the General Assembly of the United Nations [8].

Let’s note that although Israël saluted the US recognition of its sovereignty over Golan as a victory, Saudi Arabia, after reflection, condemned it. This position does not correspond to the Saudi doctrine, but considering the unanimity of the Arab world opposing this territorial conquest, Riyadh chose to rally with its people. For the same reason, it will also be obliged to refuse the « deal of the century » concerning Palestine.

Have the United States changed?

The Press will not allow itself to anticipate, as we have just done, the end of the UNO and the division of the world into two distinct legal zones. Since it does not understand the events, it clings to its mantra – the populist Donald Trump will have changed the United States and destroyed the liberal international order.

This is to forget History. US President Woodrow Wilson was certainly one of the principal architects of the League of Nations after the First World War. But being founded on the equality of states, in conformity with the ideas of French statesmen Aristide Briand and Leon Bourgeois, it clashed directly with US exceptionalism. This is why the USA never became a member.

On the contrary, the United Nations Organisation, of which President Roosevelt was one of the architects, mixed a democratic assembly of states and a world directorate, the Security Council, inspired by the system of governance of the Congress of Vienna (1815). It therefore became possible for the United States to participate, which they did.

They can no longer exercise authority over either Russia or China, and since they have no further reason to deal with these two powers, the United States of America is withdrawing from the United Nations.

It is grotesque for these Western powers, which have enjoyed the benefits of this system for 74 years, to whine and snivel about their departure. We should rather be asking ourselves how we could have built such a lop-sided edifice – the League of Nations had institutionalised equality between the states, but refused equality between the Peoples, while the United Nations Organisation attempted to impose a universal morality by ignoring the universalism of the human species.

0 thoughts on “The UNO destroyed by US «exceptionalism»”