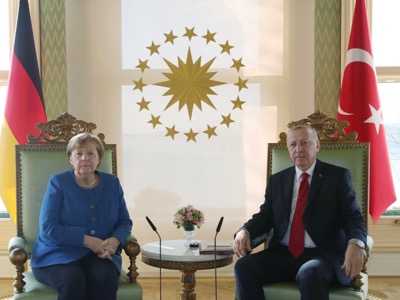 75 years after the Second World War, Germany intends to become a power on the international stage once again. It has chosen to return to the expanded Middle East. But it is difficult and dangerous to rise to this level without any experience other than historical.

According to the plan drawn up by Volker Perthes in 2013, Germany is preparing to replace US soldiers in the broader Middle East. It is chattering impatiently after 75 years of being deprived of its rightful international role. It is a matter of national honour.

Germans intend to use their army to establish peace somewhere, they who had to bear the brunt of the lost wars of Nazism.

They first hoped to enter Damascus victoriously alongside the brave “democrats” of Idleb. There! They’re just jihadists! Then they hoped to replace the GIs in northern Syria when President Donald Trump announced their withdrawal for the second time. Unfortunately, ceding to the Pentagon, they turned back. They refrained from intervening in the Turkish operation against the PKK/YPG in view of its large Turkish and Kurdish immigrant population. They then imagined covering their actions behind a humanitarian alibi, tabling a draft resolution in the Security Council and provoking the outraged vetoes of Russia and China.

In October 2019, they discreetly sent experts to test the ground with the Egyptian President, Abd al-Fattah al-Sissi, and the Emir of Qatar, Sheikh Tamim bin Hamad Al-Thani. In the end, they set their sights on Libya and organised the Berlin conference on January 19, 2020.

Once again, it was a sword in the water. The two main rivals, Fayez el-Sarraj and Khalifa Haftar, did not even speak. But Chancellor Merkel received the unanimous support of her ruling class for “working for peace”. The final communiqué sets out this imaginary vision of a ceasefire that nobody wants and a German army that enforces it.

It is not easy to understand the broader Middle East after 75 years of absence, not only here but on the international stage.

Perhaps Germany will find a new opportunity with its longstanding military ally, Turkey. However, this is not a foregone conclusion: the European Union is 2.6 billion euros behind schedule on the Migration Pact, revealed Turkish Foreign Minister Mevlüt Çavuşoğlu. Berlin and Ankara have not stopped arguing since the attempted coup of 2016 and the half-million arrests that followed, including 59 German citizens still in detention. And they are fighting again over the exploitation of gas in the Mediterranean.

But there are also many historical ties between the two countries, for better or for worse (Rudolf Höss participated in the genocide of non-Muslims perpetrated by the Young Turks, then a few years later became director of the Auschwitz extermination camp, before being sentenced to death by the Nuremberg Tribunal). Human ties too, since the largest Turkish expatriate community has resided in Germany since the Cold War. The Federal Republic has also welcomed leaders of the Muslim Brotherhood since the attempted coup d’état in Hamah in 1982 and set up a special office for them in the Foreign Office at the beginning of the war against Syria.

Chancellor Angela Merkel therefore travelled to Istanbul for the inauguration of a new campus of the German-Turkish University. She again expressed her country’s willingness to “help” the region. For example, she offered to build 10,000 housing units for people arriving from Idleb. But was she talking about civilians or jihadists?

0 thoughts on “German Ambitions in the Wider Middle East”