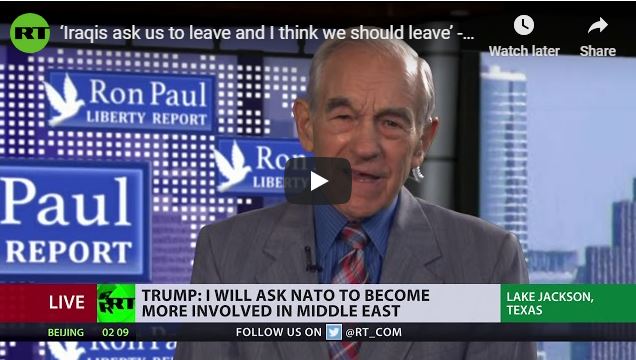 It’s “not totally unlike Trump to make a lot of noise” and then ultimately “back off a bit” when it comes to handling international conflicts — but that doesn’t mean the dangers have passed, former congressman Ron Paul told RT.

Trump backed away from the idea of striking Iran in a much-anticipated address on Wednesday, as the two nations seemed to be on the brink of war over the US killing of top Iranian general Qassem Soleimani. He did, however, double down on promises of more crippling sanctions.

Paul told RT that while Trump’s decision not to escalate militarily was positive, problems and dangers still exist because the president has “too many neocons around him trying to aggravate things.”

He also called US sanctions on Iran an “act of war” in themselves, and said that Americans would be outraged if another country engaged in economic warfare and blockades against Washington. “There’s a war going on” already through sanctions, he said.

Paul reiterated his long-standing view that the US should pull its troops out of Iraq and said that the US’s “monstrosity of an embassy” in Baghdad was just “provoking” people into attacks on US personnel.

The former congressman and libertarian said that the US should be “very engaged” in the world, but through diplomacy and trade, rather than military aggression.

He also said the narrative of Iran as the aggressor or initiating force behind recent tensions is misleading, because in its position it simply “can’t afford to be” an aggressor.