HOME / WORLD / One and a Half Cheers for Tulsi Gabbard 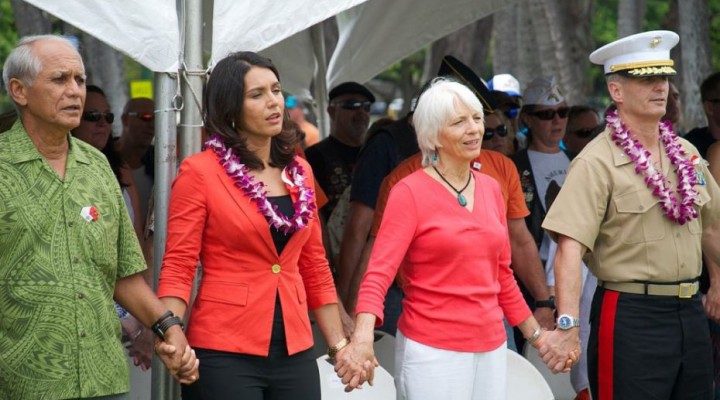 Daniel Lazare- Congratulations to Tulsi Gabbard for refusing to take part in an impeachment sham that is nothing more than an imperialist war drive in disguise.

There are lots of things to criticize about Tulsi Gabbard’s “present” vote in the impeachment charade. Her invocation of Alexander Hamilton in her “House Divided” statement was ridiculous. Why this constant need to invoke a statesman who died more than two centuries ago? Do British politicians invoke Edmund Burke or William Pitt at every turn?

The same goes for her statement that impeachment is “a partisan process fueled by tribal animosities.” What’s causing the great American meltdown is not partisanship so much as a 232-year-old Constitution that everyone claims to adore – especially during impeachment time – but which grows more rigid, dysfunctional, and undemocratic with every passing year. The more farcical the cult of the Constitution grows, the more ridiculous are the politics that flow out of it.

Finally, her plea to Americans “to make a stand for the center” in order to “bridge our differences” is too little too late. Centrism is dead because “moderate” politicians like Hillary Clinton, Barack Obama, and Tony Blair killed it by unleashing havoc on the Middle East and generating a refugee crisis whose reverberations are still being felt. It’s dead and gone, and there’s no point trying to revive it.

So it wasn’t Tulsi’s finest moment. But what a relief from the crazed warmongering of Adam Schiff, the Hollywood neocon in charge of impeachment who has been working nonstop with the intelligence agencies to throw Trump out of office – for all the wrong reasons, one might add.

His thirteen-minute harangue during the impeachment debate was typical. It began with the obligatory nod to Hamilton before moving on to a parade of half-truths and distortions.

“Over the course of the last three months,” he said, “we have found incontrovertible evidence that President Trump abused his power by pressuring the newly elected president of Ukraine to announce an investigation into President Trump’s political rival Joe Biden with the hopes of defeating Mr. Biden in the 2020 presidential election and enhancing his own prospects for re-election.”

This was nonsense. Sure, Trump wants to enhance his re-election prospects – what first-term president doesn’t? But even though he has a political interest in taking down Biden, the American public has an equal interest in investigating a man who allowed his son to rake in hundreds of thousands of dollars from a corrupt Ukrainian oligarch at a time when he was supposedly rooting out Ukrainian corruption. Biden was part of the problem he was supposed to solve, yet Schiff seems to think he deserves a free pass merely because he’s running for president.

Schiff then assailed Trump for undermining “a nation at war with our adversary Vladimir Putin’s Russia” by withholding $391 million in military aid. In fact, withholding aid from the neo-Nazis of the Ukraine’s Azov Battalion was one of the few good things Trump has done since taking office. Rather than undermining national security, he was doing the opposite by keeping the US out of another pointless conflict.

Besides, how do we know Russia is “our adversary” – because Schiff says so? Has Congress taken a formal vote on the topic? Did it declare war and then forget to inform the rest of us?

Finally, there was the Russiagate baloney that is the specialité de la maison:

“As a candidate in 2016,” Schiff said, “Donald Trump invited Russian interference in his presidential campaign, saying at a campaign rally, ‘Russia, if you’re listening, I hope you’re able to find the 30,000 emails that are missing,’ a clear invitation to hack Hillary Clinton’s emails. Just five hours later, Russian government hackers tried to do exactly that. What followed was an immense Russian hacking and dumping operation and a social media disinformation campaign designed to help elect Donald Trump. But not only did candidate Trump welcome that effort, he made full use of it, building it into his campaign plan [and] his messaging strategy…. This Russian effort to interfere in our elections didn’t deter Donald Trump. It empowered him.”

It’s as if Special Prosecutor Robert Mueller had never issued his verdict of no collusion. Trump’s statement about finding Clinton’s mails – delivered at a July 27, 2016, press conference, by the way, not a campaign rally – was clearly a joke. It had nothing to do with Russia’s hack of the Democratic National Committee, which in turn had nothing to do with WikiLeaks’s massive email dump. (“We have upcoming leaks in relation to Hillary Clinton,” Julian Assange announced six weeks earlier, three days before hearing from alleged Russian conduit Guccifer 2.0. So how could Russian intelligence supply WikiLeaks with emails that it already had?) With just $45,000 worth of Facebook ads prior to Election Day, the social media operation mounted by a private Russian firm known as the Internet Research Associates was also the opposite of what Schiff says it was – puny rather than massive. Moreover, Mueller made no effort in his February 2018 indictment of the IRA to connect its efforts with the Russian government, no doubt because he knew he could never prove any such connection in a court of law.

So there’s no evidence that Russia supplied WikiLeaks, that the IRA social media campaign was anything more than minor background noise, that the Kremlin did anything to spur its efforts on, or that Trump colluded, directly or indirectly. Schiff made it all up. But truth means nothing to such people. All he knows is that his campaign war chest has more than tripled from $2.1 to $6.8 million since he emerged as point man on Russiagate and that he’ll never have to worry about re-election again as long as he continues playing the Russia card. If “all that matters to this president is what affects him personally,” as Schiff said of Trump, then what is there to say about the congressman from Northrop Grumman – that all he cares about advancing his own political interests as well?

So congratulations to Gabbard for refusing to take part in an impeachment sham that is nothing more than an imperialist war drive in disguise. It’s a shame that her follow-up statement was so weak since she missed a golden opportunity to slam the warmongers who have caused one disaster after another for the last twenty years and are seemingly intent on causing more. But least she took a stand, which is more than one can say about hundreds of other Democrats on Capitol Hill.

0 thoughts on “One and a Half Cheers for Tulsi Gabbard”