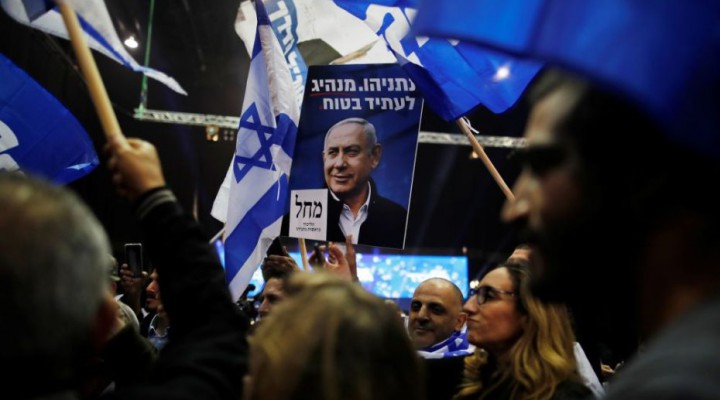 Daniel Lazare- Netanyahu is back where he started. No matter how many times Israelis go to the polls, they find that that a stable ruling majority is out of reach.

Elections are supposed to solve problems by reordering government, adopting new policies, and putting new people in control. But how many elections must Israel have before it realizes it can do none of those things because it’s caught in an intractable constitutional bind?

The latest election, the third in less than a year, saw Benjamin Netanyahu surge past Benny Gantz, his slightly more moderate rightwing challenger. But otherwise it accomplished nothing since it still left Netanyahu’s coalition with just 58 seats, three shy of a majority. This was a slight improvement over the last election, which left him six short, but a step back from the election last April when he was able to assemble a hair-thin 61-seat majority – but which, in any event, fell apart after just a few weeks.

So Netanyahu is back where he started. No matter how many times Israelis go to the polls, they find that that a stable ruling majority is still out of reach.

Why? The problem, basically, is one of politics and demography. A growing portion of the population is either anti-Zionist, non-Zionist, or indifferent to the entire concept. Zionist parties must therefore battle for control of a Zionist hard core that is constantly shrinking in hopes of assembling a governing majority. The more the numbers turn against them, the more difficult the task becomes, which is why paralysis and incoherence are increasingly the norm.

This is especially the case the more politicians quarrel over what Zionism even means. Avigdor Lieberman, Netanyahu’s bellicose former minister of defense, shows how mind-bending the problem has become. His party, Yisrael Beiteinu (“Israel is Our Home”), saw its representation shrink from eight to seven seats in the latest round. But since he’s also far to the right, it should still be enough to put Netanyahu over the edge – if, that is, he agreed to join his coalition.

But he won’t. The reason is that Yisrael Beiteinu represents a million or so ex-Soviets who immigrated after 1989 only to fall victim to a curious contradiction in Israeli religious law. For purposes of immigration, Israel uses the old Nazi definition of a Jew as anyone with one or more Jewish grandparents. As strange as this may sound, Israel’s founders figured that anyone Jewish enough to suffer under Nazi oppression should be Jewish enough to find refuge in the Jewish state – and so the Nazi standard became law. But for purposes of family law and other domestic affairs, they adopted a different standard, that of the orthodox rabbinate, which holds that the only Jews who qualify are those born of a Jewish mother or who convert under orthodox supervision.

Some forty percent of Lieberman’s followers do not meet the rabbinic standard, which means that they are effectively reduced to second-class citizenship in terms of marriage, employment, and a host of other issues as well. But makes the issue especially explosive is the military draft, which affects ex-Soviets but not orthodox males who devote themselves full-time to religious studies. David Ben-Gurion, Israel’s first prime minister, struck the deal back in 1948 when just a few hundred yeshiva students in Jerusalem were affected. Since then, however, the orthodox sector has expanded to twelve percent of the population, more than a million people in all. Soviet immigrants and their children must their lives at risk to protect orthodox Israelis who don’t even regard them as Jewish.

Lieberman has made it clear that he will not enter any government that allows such exemptions to continue. But it’s a demand that Netanyahu cannot possibly accommodate since he is dependent on the support of the religious parties for support. The impasse promises to continue without end.

But what makes it even more perplexing is that while Lieberman’s semi-Jewish supporters are pro-Zionist, orthodox Jews are not. To contrary, they believe that God exiled the Jews to punish them for their disobedience. Hence, he doesn’t want them returning to the Holy Land until he shows his forgiveness by sending a messiah to lead them back. By seeking to “hurry the messiah,” Zionism is therefore a deeply heretical movement that promotes an ingathering of the Jews in violation of God’s direct command. Jewish Zionists thus battle Palestinian anti-Zionists in the Occupied Territories in behalf of Jewish anti-Zionists in Jerusalem.

Add to this the 23 percent of Israeli society that is non-Jewish, and the anti-Zionist portion of the population rises to 35 percent. Toss in a few thousand supporters of the leftist Meretz Party who are heartily sick of the entire Zionist enterprise, and the number rises to 36 or 37. Finally, if you include the 4.4 million Palestionians who live in Gaza and the West Bank, then the anti-Zionist component of Greater Israel, which is to say the entire territory from the Jordan River to the Mediterranean Sea, rises to 76 percent, far too great for anything resembling democratic Zionist stability.

So the only thing that three Israeli elections in less than a year prove is that the country is at a crossroads. It can continue to be democratic or Zionist but not both. Netanyahu will undoubtedly try to scare an increasingly perplexed population into line by sending fanatical Jewish settlers into the West Bank to cut down olive trees, smash windows, or otherwise behave like Nazi stormtroopers. If a few Palestinians respond with violence, then so much the better since he’ll be able to make use of the resultant furor to extend his grip on power for a few months or more. But the more isolated Zionism becomes, the more difficult the task will grow.

Netanyahu may seem like a strong and clever politician, but his back is against the wall. He may think he can ignore reality, but reality will eventually have its revenge.