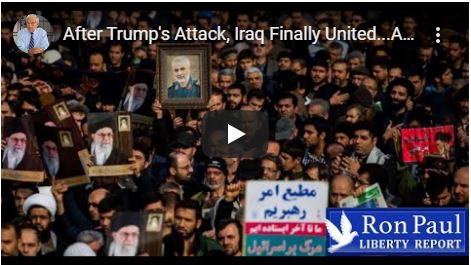 Ron Paul & Daniel McAdams- Yesterday President Trump ordered the assassination of senior Iraqi and Iranian military leaders in Baghdad, claiming without evidence that they were plotting against Americans in Iraq.

While neocons and the media cheer the attack, no one seems interested in asking “what’s the end game”?

Especially as Iraq now urgently wants US troops out of the country. Is Trump going to go to war with Iraq (again) AND Iran? Watch today’s special edition of the Liberty Report:

0 thoughts on “After Trump’s Attack, Iraq Finally United…Against Us!”