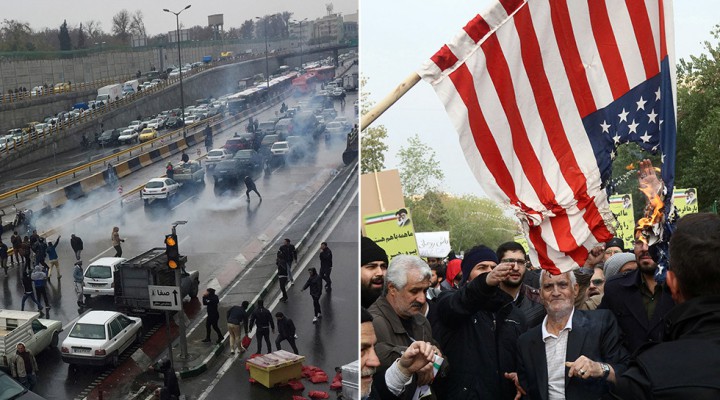 Data from two foreign polls tell a very different story about protests in Iran. The economy is tough, but a majority of Iranians back their government’s security initiatives and reject domestic upheaval.

On November 15, angry Iranians began pouring onto the streets to protest sudden news of a 50% fuel price hike. A day later, peaceful demonstrations had largely dissipated, replaced instead by much smaller crowds of rioters who burned banks, gas stations, buses and other public and private property. Within no time, security forces hit the streets to snuff out the violence and arrest rioters, during which an unconfirmed number of people on both sides died.

Western commentators tried in vain to squeeze some juice out of the short-lived protests. “Iranian protesters strike at the heart of the regime’s legitimacy,” declared Suzanne Maloney of the Brookings Institution. France 24 asked the question, is this “a new Iranian revolution?” And the LA Times slammed Iran’s “brutal crackdown” against its people.

They grasped for a geopolitical angle too: protests in neighboring Lebanon and Iraq that were based almost entirely on popular domestic discontent against corrupt and negligent governments, began to be cast as a regional insurrection against Iranian influence.

And despite the fact that the internet in Iran was disabled for nearly a week, unverified videos and reports curiously made their way outside to Twitter accounts of Iran critics, alleging that protestors were calling for the death of the Supreme Leader, railing against Iran’s interventions in the region and calling for a fall of the “regime.”

Clearly, the initial protests were genuine – a fact that even the Iranian government admitted immediately. Reducing petrol subsidies on the cheapest fuel in the region has been an issue on Iran’s political agenda for years, one that became more urgent after the US exited the Iran nuclear deal last year and began to tighten the sanctions screws on Iran again.

To try and understand Iranian reactions in the past twelve days, let’s look at two opinion polls conducted jointly by the University of Maryland’s Center for International and Security Studies at Maryland (CISSM) and Toronto-based IranPolls in the immediate aftermath of the 2017/2018 protests/riots – and in May, August and October 2019, when the US “maximum pressure” campaign was in full gear.

What leaps out immediately from the earlier 2018 poll is that Iranians were frustrated with a stagnant economy – and 86% of them specifically opposed a hike in the price of gasoline, the main impetus for protests this November.

Ironically, this month’s gasoline price hike was meant to generate upward of $2.25 billion earmarked for distribution to Iran’s 18 million most hard-hit families. In effect, the government was softening the fuel subsidy reduction with payouts to the country’s neediest citizens.

These numbers suggest the 2018 protests were overwhelmingly in response to domestic economic conditions– and not over Iran’s foreign policy initiatives or “widespread repression” that was heavily promoted by western media and politicians at the time.

The same Suzanne Maloney quoted above on this month’s protests, insisted in a 2018 Washington Post article:“The people aren’t just demonstrating for better working conditions or pay, but insisting on wholesale rejection of the system itself.”

In fact, in the 2018 poll, only 16% of Iranians agreed with the statement “Iran’s political system needs to undergo fundamental change,” with a whopping 77% disagreeing.

Like protests this month in Iran, the 2017-18 demonstrations also morphed into small but violent riots, and Iranian security forces hit the streets to stop the chaos. But in the aftermath of those events – and despite endless foreign headlines about the “brutality” of the security reaction – Iranians overwhelmingly sided with their government’s treatment of rioters.

Sixty-three percent of those polled in 2018 said the police used an appropriate amount of force, and another 11% said they used “too little force.” Overall, 85% of Iranians agreed that “the government should be more forceful to stop rioters who use violence or damage property.”

This Iranian reaction must be understood in context of Iran’s very insecure neighborhood, region-wide terrorism often backed by hostile states and a relentless escalation against Iranian interests after Donald Trump became US president. His “maximum pressure” campaign has only worsened matters, and Iranians consider themselves in a state of war with the United States – on constant guard against subversion, sabotage, espionage, eavesdropping, propaganda, border infiltration, etc.

Earlier this decade, the US military declared the internet an “operational domain”of war, and cyber warfare has already been widely acknowledged as the future battle frontier in conflicts. Iran was one of the early victims of this new warfare, when the suspected US/Israeli Stuxnet virus disrupted its nuclear program.

The US military has set up war rooms of servicemen dedicated to manipulating social media and advancing US propaganda interests. The British army has launched a “social media warfare” division, its initial focus, the Middle East. Israel has been at the online propaganda game forever, and the Saudis have recently invested heavily in influencing discourse on social media.

It should therefore come as no surprise that the Iranian government shut down the internet during this crisis. Expect this to become the new normal in US adversary states when chaos looms and foreign information operations are suspected.

The western media themes of corruption, violent repression, popular rejection of the Islamic Republic and its regional alliances have been consistent since the 2009 protests that followed contentious elections in Iran. They flared up briefly in early 2011, when western states were eager for an “Iranian Spring” to join the Arab Spring, and became popular narratives during 2017-18 protests when social media platforms adopted them widely.

This November, those narratives sprung to the surface again. So let’s examine what Iranians thought about these claims in October when CISSM/IranPolls published their latest, extremely timely survey.

Sixty-one percent of Iranians support retaining military personnel in Syria to contain extremist militants that could threaten Iran’s security and interests. Polls taken since March 2016 confirm the consistency of this view inside Iran, with a steady two-thirds (66%) of respondents supporting an increase in Iran’s regional role.

Moreover, the October 2019 report says negative attitudes toward the United States have never been higher in CISSM/IranPoll’s 13 years of conducting these surveys in Iran. A hefty 86% of Iranians do not favor the US, and those who say their view of the US is very unfavorable has skyrocketed from 52% in 2015 to 73% today.

They could care less that Washington has sanctioned the IRGC and its elite Quds Force Commander Qassem Soleimani, who is the most popular national figure of those polled, with eight in ten Iranians viewing him favorably. If anything, a hefty 81% of Iranians said the IRGC’s Mideast activities has made Iran “more secure.”

As for the IRGC’s role in Iran’s domestic economy – a favorite subject of western foes who cast the military group as a malign and corrupt instrument of the state – today 63% of Iranians believe the IRGC should be involved “in construction projects and other economic matters,” as well as continuing their security role. In times of crisis, they’re viewed as a vital institution: the IRGC and Iranian military scored top points with the public (89% and 90% respectively) for assisting the population during crippling floods last Spring, which displaced half a million Iranians.

Seventy percent of Iranians view their economy as “bad” today, a figure that has stayed surprisingly consistent over the past 18 months, despite the imposition of US sanctions last year. The majority blame domestic mismanagement and corruption for their economic woes, but a rising number also blame US sanctions, which is possibly why 70% of Iranians prefer aiming for national self-sufficiency over increasing foreign trade.

Asked about the “impact (of sanctions) on the lives of ordinary people,” 83% of Iranians agreed there was a negative impact on their lives. Oddly, since the US exited the JCPOA, economic pessimism has dropped from 64% in 2018 to 54% last month-mainly, the poll argues, because Iranians feel the US can’t realistically pressure Iran much further with sanctions. Accordingly, 55% of Iranians blame domestic economic mismanagement and corruption for Iran’s poor economy versus 38% who blame foreign sanctions and pressure.

The blame for much of this mismanagement and corruption is pinned on the administration of President Hassan Rouhani, whose favorability numbers dropped under 50% for the first time, to reach 42% this August. Fifty-four percent of Iranians think his government isn’t trying much to fight corruption.

In contrast, 73% believe the Iranian judiciary is much more engaged in fighting economic corruption, up 12% since May.

On the economic front, it appears that Iranians have largely been disappointed by the promises and vision of this administration, which could benefit its Principlist opponents in upcoming parliamentary elections. The fuel tax hike two weeks ago was a necessary evil and a brave move by Rouhani, despite the mismanagement of its public rollout. Unfortunately, Iranians, who have railed against subsidy removals for years, are unlikely to be forgiving anytime soon.

On the political front, Iranians appear to be largely in lockstep with their government’s foreign policy and military initiatives, viewing the IRGC’s activities – domestic and regional – very favorably, and supporting Iran’s involvement in neighboring Iraq and Syria, both for security reasons against terrorism and because they believe in an active regional role for Iran. In terms of support for their leaders, a majority of Iranians view favorably the IRGC’s Soleimani (82%), followed by Foreign Minister Mohammad Javad Zarif (67%) and Judiciary Head Ebrahim Raisi (64%), which covers an unexpectedly broad spectrum of political viewpoints in the country.

In light of these numbers, it is fair to say that there is no “second revolution” on Iran’s horizon, nor any kind of significant rupture between government and populace on a whole host of key political, economic and security issues. Foreign commentators can spin events in Iran all they want, but so far Iranians have chosen security and stability over upheaval every time.

*Poll numbers in this article have been rounded up or down to the nearest unit.