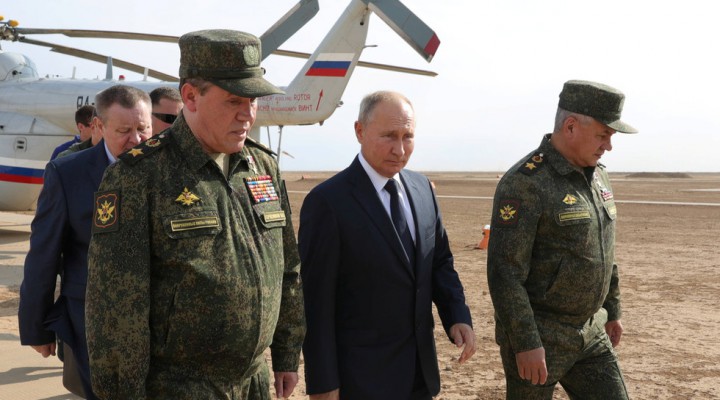 Putin intervened to state clearly and directly that a one-year extension of the New START treaty was the only option. The White House declined, setting the stage for a new arms race should Trump win in November.

Less than a week after US-Russian talks on the future of the New START treaty collapsed – amid recriminations from both sides stemming from a misunderstanding, whether deliberate or otherwise, regarding Moscow’s position – President Vladimir Putin intervened in a high-profile bid to inject both clarity and a sense of urgency about the future viability of the last remaining arms control agreement between Russia and the US.

In a live, public broadcast of a video conference between Putin and the Security Council of the Russian Federation, the president issued instructions that left no doubt as to either his intent, or that of his diplomats, when it comes to New START. After noting that it had “worked properly” during its history in “performing its fundamental role as a constraint curtailing the arms race and a tool of arms control,” Putin instructed Foreign Minister Sergey Lavrov that the Russian position was

“…to extend the Treaty now in effect unconditionally for at least a year in order to have a chance to hold substantive talks on all the parameters of problems that are regulated by treaties of this kind, lest we leave our countries and all nations of the world with a vested interest in maintaining strategic stability without such a fundamental document as the Strategic Offensive Arms Limitation Treaty (i.e., New START.)”

and instructed him to

“…formulate our position to the US partners and try to obtain at least some comprehensible reply from them as soon as possible.”

Putin’s directive came after a presentation by Lavrov on the current situation regarding US-Russian talks on “strategic stability.” Far from shutting the door on further negotiations, Lavrov articulated an environment of ongoing dialogue about so-called “new agreements” derived from Russian proposals “in furtherance of the comprehensive approach of strategic stability” presented to the US negotiating team led by US Presidential Advisor for Arms Control Marshall Billingslea.

The US diplomatic offensive regarding a new arms control framework agreement that went beyond the terms and conditions enshrined in the New START treaty appeared to have been triggered by a telephone conversation between Putin and Trump in which both expressed a desire to see the treaty extended while negotiations regarding a replacement treaty vehicle were underway.

Billingslea appeared to have interpreted this conversation as representing a so-called “gentleman’s agreement” to alter the framework mandated by New START to include a freeze on nuclear weapons and other conditions not regulated under the treaty.

While the US stance was rejected by Russian Deputy Foreign Minister Sergey Rybakov as “delusional,” Billingslea, in a video conference with the US conservative think tank the Heritage Foundation, continued to articulate a position suggesting that any problems with the US-Russian negotiation were derived from Rybakov’s failure to comprehend the instructions of the Russian president.

🇷🇺DFM S.#Ryabkov: 💬#Russia and #US didn’t agree on nuclear arsenals freeze. It’s unclear what the US media information is based upon. Framework agreement on #ArmsControl can be developed at any time should the US accept our proposals. pic.twitter.com/klF4Pv9KsF

Putin’s statement to the Security Council left no doubt as to where Moscow stood on the matter.

Billingslea’s mission was always a bridge too far, seeking to compel Russia into accepting what amounted to a new arms control framework that lacked both a legally binding vehicle such as a treaty, and a system of verification. The purpose behind his efforts appeared to be more about domestic American politics, enabling President Trump to claim a major foreign and national security victory on the eve of a contentious national election in which Trump is seeking a second term over a challenge from a Democratic candidate, former vice president Joe Biden, and less about creating a viable, lasting arms control agreement.

Putin’s statement put to rest any notion that Trump was going to be able to get the arms control talking point he wanted: that he had personally negotiated an improvement to the Obama-era New START treaty.

The White House immediately rejected the Russian president’s offer. The US National Security Council responded via Twitter, apparently written by Billingslea, declaring that a one-year extension of New START was contingent on Russia and the US capping all nuclear warheads during that period, and that “we believed the Russians were willing to accept this proposal when I met with my counterpart in Geneva.” Billingslea rejected Putin’s offer as “a non-starter.”

In the tumultuous world of the Trump White House, where everything appears to be calibrated based on how it will impact Trump on election day, it is not possible to state with any certainty that Billingslea’s tweet represents anything approaching the final say on the matter of New START. Putin’s proposal made it clear that Russia is open to constructive talks regarding a future arms control agreement that took into consideration US concerns. This, in and of itself, represented a political victory, given that Trump could portray New START as a “failed treaty” he was going to improve.

If he had wanted, Trump could also have accepted the Russian proposal for a one-year unconditional extension of New START and built on Putin’s apparent willingness to work toward a new, more expansive arms control agreement as an example of his diplomatic prowess. There are still three weeks before the November 3 election, and anything is possible.

But Putin’s words were not just meant for President Trump and those who surround him. Putin expressed his opinion about Biden too, in the context of arms control, in statements made earlier this month.

“Candidate Biden has said openly that he was ready to extend the New START or to sign a new strategic offensive reductions treaty. This is already a very significant element of our potential future cooperation. I would like to repeat what I have said more than once before: we will work with any future president of the United States, the one [to] whom the American people give their vote of confidence,” he said.

In this light, Putin’s instructions to Lavrov appear to address a larger audience. While Putin declares himself open to a one-year extension of New START at any time during a Trump presidency, he has also opened the door to a new Biden administration, if the Democrat makes it to the White House. If Biden wins, there will be a brief window between him being sworn in as the 46th president and the expiration of the New START treaty. A one-year extension of New START, void of any preconditions, could be accomplished with, literally, the stroke of a pen.

The thought of Joe Biden getting a major foreign policy victory so early in his administration alone should drive Trump to take up Putin’s offer before November 3. But one thing is for certain: Putin doesn’t care who he signs an agreement with, just as long as the New START treaty vehicle is preserved while a new treaty is negotiated.